However, given time, thought, and consideration, the seemingly simple word loses its simplicity. Perhaps by virtue of  its initially simplicity, the term “green” becomes fluid, a word which has no definite definition, no concrete sense of being. Even Merriam and Webster, who since 1828 have faithfully defined English terminology in dictionary form, struggle to pinpoint the meaning of green. In fact, green serves as a noun, verb, adjective, and even name, totaling over a dozen different definitions. My personal favorite is the first listed for green as a noun, reading as “a color whose hue is somewhat less yellow than that of growing fresh grass or of the emerald or is that of the part of the spectrum lying between blue and yellow.”

However, in everyday life, we rarely think of green in such poetic terms. Rather, for some, words such as “life,” “forest,” and “mother nature” come to mind for some. For others, green brings back images of childhood toys such as “dinosaur” or possibly “obnoxious lime green closet” for those who went through a neon faze during middle school, or perhaps you are one of those who contemplate in more abstract terms and who would cite “happiness,” “peace,” or general “good feelings” as green. **All of the above terms are responses from gender and racially diverse college freshman at Duke**

The term green has long possessed this subjective, highly variant identity. In Germanic languages associated with vitality, in Greek and Latin associated with sickness, in Britain as a “piece of public or common grassy land situated near a town or college,” green has a multitude of meanings. Recently, there has been an evolution towards seeing green in a more ecological light, hence its inclusion in Keywords for Environmental Studies. However, the term green remains ever changing, ever adapting to the person, situation, or perspective in which it is viewed as is the color associated with the environmentally friendly movement. Both are human constructs privy to change. Perhaps in the years to come, green will find another definition completely distant from the environmental movement and perhaps the rainbow sheen of oil on water will take its place. Only time will tell.

A subject discussed in detail by Cox and Pezzulo in Chapter 4 of their co-authored textbook Environmental Communication and the Public Sphere, environmental communication is not limited to words but rather spans a wide range of medias, from sounds we hear while interacting with others to images we pull up on our technological devices which have become an increasingly powerful presence in our modern global age.

In specific, I would like to further examine environmentally charged images, specifically in relation to animals and their well-being.

Here, we have this image, very obviously Photoshopped, of several polar bears. 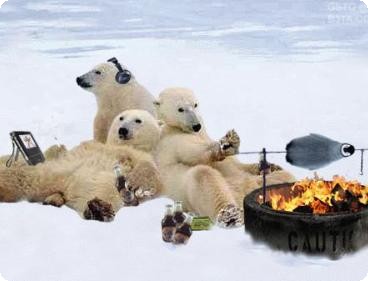 Situated very comfortably in what appears to be a wide expanse of Arctic, the bears wear headphones, hold tables, and drink soda while roasting a baby penguin over a fire pit. Found on a personal blog discussing politics from a conservative view by David Mesa of Arizona, this image fails to persuade me that global warming is a hoax as the its associated article argues. While I did find the completely divergent use of the polar bear, a seasoned condensation symbol against global warming,  interesting, it was ineffectual in changing my beliefs, as beyond making light of the polar bear symbol, there was little else conveyed by this image. Also, I am slightly confused and disturbed by the seemingly random and unexplained inclusion of the roasted baby penguin.

A more effective image, in my opinion, is this image which utilizes the polar bear in its more conventional form. Drawing upon modern society’s obsession with the “cute” polar bear and also our natural tendency to feel protective of the family unit, this image which depicts a mother and cub cuddling forlornly on a lone iceberg amidst dark waters affirms the dangers of climate change while specifically focusing on Arctic animals.  Aesthetically, this photo speaks volumes as the white bears stand in stark contrast with the water. It also evokes an image of the phrase “No man is an island” from John Donne’s poem, reminding viewers that humanity is part of a greater whole and many in said greater whole are suffering as a direct result of climate change.

An image which I find interesting is this one: Aesthetically, this image is jarring. Again, we see the inclusion of mother/child imagery as the gorilla carries her cub on her back and is accompanied by the simple by poignant slogan “where the wood go, wildlife goes.”Instead of peacefully roaming the trees, the gorilla mother is chopped in half, bloody, with her child still clinging to her. To me, the above image is highly effective in emphasizing the impact of deforestation on animals, however, I find it to be overly abrasive and a turn off, despite my own personal beliefs that deforestation is dangerous and has enormous negative environmental effects, on animal life, soil quality, air quality, etc.

Environmental communication can be vastly improved through the inclusion of diverse medias such as photography and images. However, when we utilize them, we must take note of the aesthetics utilized, message conveyed, and also the media’s effect on viewers. Another danger of images in particular is that as they can only capture one instance, many other critical factors pertinent to the same issue are omitted, as shown in the gorilla image above.

Major: Undecided but interested in ICS (focusing on China and East Asia) and Global Health!

Most interesting bit of news I read recently: There is a new primate species called the “Star Wars gibbon”! It lives in SW China.