One particular vignette from Inhabit captured my attention: there are over one million rooftops in New York, and each year the city dumps thirty billion tons of sewage water into local bodies of water. As a response, more and more groups are installing rooftop gardens.

Immediately, I grasped the brilliance of this idea. The essence of permaculture, what easier way is there to mutually benefit humans and the environment? Rooftop landscaping could produce a massive carbon sink, save on air conditioning costs, provide new habitats to animals, as well as stimulate the psychological perk we derive from green spaces. Without limiting rooftop cultivation to simply a garden, it is not beyond the realm of possibility that one day New York and our other metropoles could host a forest in the sky.

Permaculture is all about finding sustainable solutions and living symbiotically alongside nature rather than siphoning its many gifts, and large scale rooftop cultivation fits the bill. The idea is not outlandish or without precedent: the Persians were famed for their Hanging Gardens of Babylon. If people are able to recognize the ease with which such a concept can be facilitated, it might not be long before the “concrete jungle” has equal emphasis on the second word as the first. 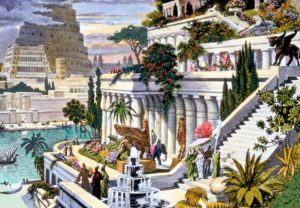