Phone in the Anthropocene

When they think of me

they think of despair

Oh, how can this be?

I was always there

They say it was radiation

A blessing turned to assassin

Now, all I know is stagnation

Once a third arm, I’m unfastened

Lightbulbs in the Anthropocene

I am but a fixture,

a part of the norm.

Bound by my maker,

to dim my glow.

yet my light still shines.

and let me die.

I am an airplane in the Anthropocene. Everyday I fly back and forth between an island off the coast of Madagascar and any one of the world’s twenty mega-cities, picking up nostalgic passengers yearning to see the last bit of conserved nature on the planet. Today, I departed from New York City. On board is a middle-aged father and ten year old son. The father appears concerned and weary, perhaps guilty. He was warned about this – about the time that his kids would lose the natural world he loved, yet treated with hatred. His son is thrilled for this trip and ironically thanks his father, but he swiftly waves off the appreciation and wonders what had been missing from the warnings. Why did he not change his ways to preserve nature all those years ago?

Computer in the Anthropocene

I am a computer living in the year 2217. My owner Kevin used me today to see whether it was ok to go outside as the air quality has been exceptionally poor recently. I recommended not to go just to be safe. However, at the very least he will have to go outside for a second to put me in the sun to charge. It’s the only source of power nowadays as the fossil fuels of old are a distant past. Later, he turns me back on to hang out with his friends. The idea of driving over and hanging out in person at a bar or someone’s house is no longer feasible as electric and solar powered cars have become far to expensive to own in the new global climate. He does this everyday, as the only representation and interaction people now have is the holographic images I portray of them across the internet. It is a fascinating life, far different from what people used me for hundreds of years ago to aimlessly watch videos, play games, keep informed on the current news, and more. Times were simple then, but for rather different reasons, they are even more so now.

Cereal in the Anthropocene

Cereal in the Anthropocene

Charlie reached into the cabinet,

He grabbed a bowl, a spoon, and the box.

“Chocolate Flavored Puffs: With Lots of Artificial Flavors and No Preservatives!”

Nothing to preserve if the chocolate wasn’t real to start with.

He doesn’t have to eat soggy cereal,

since there isn’t any milk to pour.

BREAKING NEWS: Government announces that energy budget for each citizen will be cut indefinitely, effective immediately. Wristbands will reflect the changes as of 8:00 am this morning. Make adjustments in your lives accordingly. No exceptions will be made.
A government controlled energy ration system. Each citizen is allocated a fixed amount of energy that is controlled by a wristband. They have to budget the energy for everything they want or do: electricity, transportation, food preparation, hospital visits, physical activity. The wristband has a modest, sleek design with a clasp that is nearly impossible to undo. The wristbands design does not inhibit anyone’s sense of style and makes it impossible for anyone to lose. Energy was once freely exchanged in the world but, now it must be conserved, even to the point on monitoring, and limiting physical actions.

Butterflies in the Anthropocene

Thud – thud – thud. Our wings beat in vain, propelling us forward in what feels to be an endless cycle, an eternity in which we are fated to forever remain here – moving yet immobile. It’s warm, crowded. The lights – too bright – glint from above, reflecting in the clear box that both is our world and separates us from it. But one day, we may be free. One day, if the rain comes back, and the sun gently warms the earth instead of scalding it. One day, if the hard gleaming metal fades back into a gentle green, and the earth giggles, we will once again flutter the clear skies and dance with dandelions. Perhaps, one day we will be more than a mass of fragile wings yearning for release.

Glasses of the Anthropocene

I guess I’m not sure if they ever truly saw.

Was anything ever distinct

To them? Was everything always blurry? Was the distance too great?

If they couldn’t see, then how shocked would I have made them be?

The lift of a veil into a world unseen.

A world that was right in front of them

What is the Anthropocene? Should it be considered a geologic era?

There is no doubt based on the evidence that humans are having a negative impact on our environment. I like the way Yeo refers to this in that “humans have mined, cultivated, trawled, bleached and emitted their way forward with new technologies and higher populations” (2016). This statement is raw and true about the past and potential future of our species. Haraway stated that “There is no question that anthropogenic processes have had planetary effects, in inter/intraaction with other processes and species” (2015). Based on human impacts on an international basis over the last few hundred years, this point in time is starting to be referred to as the “Athropocene”. This is the period of geologic time where humans have resulted in exponential increases in anything from population, carbon dioxide, surface temperature, tropical forest loss, ocean acidification, methane, energy use, water use, and international tourism (Yeo 2016). No matter which way you mold the topic there is no denial in the power that humans have in determining the degradation or restoration of the earth itself.

The question we then can ask is what do we do about it? Everyone is waiting for an answer from someone else on what to do, how to act, and decisions to make. This in itself is a whole other human problem in which we are constantly looking for someone else to do the dirty work rather than trying to figure things out on our own. As someone who considers myself a teacher it seems silly for me to wait for other scientists or people to provide answers. Yet knowing what I know, I can use my science classroom to teach what I know to be helpful as ways to influence my students and provide them with some of those solutions. This to me is the way in which I can and they can contribute in a positive way rather than negative in this “Anthropocene”. 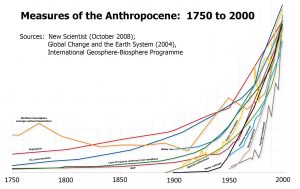 Meat in the Anthropocene

John slices a potato into thin pieces while prepping dinner for his two kids, Juliette and Adam. After slicing the potato, he sets it to the side and pulls from the cabinet a bag of genetically engineered cow meat. On the bag of so called meat the label advertises that the product “Tastes like REAL meat” and “You can’t believe it’s not meat”. Without thinking, John slices open the package and the red brick-like structure falls into the pan.

In an attempt to break up the minute little squares, John takes his spatula and pokes the meat. He watches as the little bits of blood red dyed protein fall into the pan and start to brown and sizzle. The aroma of the meat cooking in the pan releases a smell unlike any type of meat he remembers as a child.

Cloud in the Anthropocene

In the beginning, there is nothing; nothing until a mighty roar begins. I feel myself separate piece by piece while I rise. I walk through the multiple hallways of my steel home and go out of my grated front door. Now, there is light and I can see the world below me. I cruise slowly along the glass ceiling: attempting to preserve the moment but, the end always comes too soon. A person on the ground admires my design from below and I try to wave before I am gone. The track ends and I go back into nothingness. I combine as one and sleep until I can go out to play again.