How do environmental issues register differently in different cultures?

In the preface of the novel Inuit, Polar Bears, and Sustainable Use, Mary May Simon, a fellow at the Arctic Institute of North America and former Canadian diplomat, recounts her personal history regarding ways of knowing in the Inuit community and their connections with wildlife. She says of hunting polar bears, “It is far more than just hunting, processing, and eating an animal. We respect that which gives us life and that which gives its own life for our very own. Imagine trying to grasp the depth of this understanding and principle in a world of farmed animals, artificial materials, supermarkets, and fast food restaurants?”(Simon vii). This is a response to the event in May 2008, where the United States categorized polar bears as a ‘depleted species’ under the U.S. Marine Mammal Protection Act. The act banned the importing of any polar bear goods, including those from sustainable conservation hunting programs. This action deeply impacted Inuit livelihoods, where there were already provincial and federal laws in place to ensure the health polar bear populations. This is a striking example of how cross-cultural misunderstanding can lead to smaller communities being overshadowed by a dominant society’s perspective.

This interaction is paralleled in the story Staying Afloat by Angela Penrose, where the narrator, who resides in Mexico, states her opinion on the communication with Americans about environmental issues in her community: “an American product pushed by smiling blond spokesmen in expensive ‘casual’ suits who promised miracles every time they opened their mouths” (Penrose 324). The ideology that environmental issues can be solved through purely one country’s actions is not only unhelpful when discussing these issues, but can be very harmful. Every person on earth is dealing with the changing climate, and as such we should fully respect the opinions and ideas of one another. Therefore, acknowledging the fact that environmental issues register differently in different cultures is necessary in order to create effective and long-lasting solutions to environmental problems. 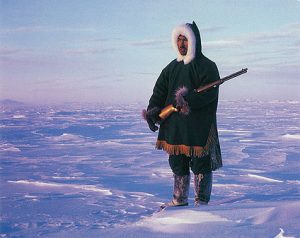