The above picture was taken at the Thai Muang Turtle Sanctuary in southern Thailand. The sanctuary is home to hundreds of endangered sea turtles, fish, corals, birds and an alligator. Not only does the sanctuary release and nurse animals, it doubles as a research center. I was told before my first day of work at this facility that it was run by Thai locals and on a small budget generated from tourists visiting the private site. The majority of the tanks that hold the animals were large plastic bins that had their water filtered by a homemade plastic piping system. The staff did not have a uniform or graduate level education. I was blown away by how well run and successful the facility was despite all these should-be shortcomings. Most Western people, myself embarrassingly included, would assume that the facility would not be run at the same standard of a sanctuary in the United States. I believe that the staff’s genuine love for the animals motivated them to be learn as much as they could and make creative low-cost solutions for their tanks.

This photo forces people to reconsider their pre-convinced beliefs about legitimate animal relief efforts in third world countries. I picked this photo because one can see that the sanctuary is not “glamorous.” One would see this photo and assume that the site does not do a good job of nurturing their animals, but the sanctuary is actually able to ensure that 80% of their juvenile turtle reach adult hood. In the wild around 10% of sea turtles reach adulthood.

I went to Thailand last summer through a civic service program run by Duke. I had always wanted to go to Thailand since my best friend went several years ago. I distinctly remember being shown pictures from their trip and finding the picture of the family on top of an elephant as the most interesting. I hoped on my trip to Thailand that I would get to take a picture on the elephants. One of the first things we learned in our program’s orientation was how cruel the Elephant tourism actually was. People practice phajaan in order to domesticate the elephants for tourism. The process involves taking a mother elephant and her calf from the wild and then killing the calf in front of the mother. The mother will then be beat and tortured for several days while it is mourning the death of its calf in order to break the mothers spirit so she will be willing to let tourists ride on top of it. Then the trainer will use a hook in the head of the elephant to help with stirring. If you look closely, you can see the hook on the top of the elephants head. All elephants involved in the industry have chronic back issues because the elephants spine cannot support more than 400 pounds for more than 4 hours, but the elephants are forced to support over a ton for 8 hours a day.

I picked this photo to represent something I do not agree with because the photo is deceptively happy. One would see this photo and and not think the that elephant industry was cruel, in fact one would likely want a picture like this one. I am influenced by how aesthetically pleasing this photo is because it does not accurately represent how ugly the elephant tourism industry is. This picture should remind us to never judge a book by its cover.

Colombian fishermen are among the most under privileged members of Colombia’s society. For decades there were fishermen who could not provide for their family because they could not catch enough fish because of their outdated fishing equipment. Due to globalization, advanced fishing rods have reached Colombia at costs low enough for poor fishermen to be able to afford them. Fishermen are now able to catch much more fish than they have ever caught before. They are able to put food on the table and sell extra food in the market. Unfortunately, fishes are now being removed from the ecosystem faster than they can be replenished. The flooding of the market with increased fish catches has also led to a drop in the value of fishes. The government is now trying to implement policies and education programs so they can teach the fishermen how to fish sustainably.

This image does not alter my opinion of the topic, but it reminds me too understand both sides of the issue. I like that the photo has the fisherman in it because it makes the situation more personal. The fishermen did not finish school. He did not learn about the tragedy of the commons or the importance of sustainable fishing. However, he knows that fish are able to help him better his and his families life. This photo highlights the importance of sustainable practices. There is a way that the environment can stay healthy while the fisherman is able to support himself. 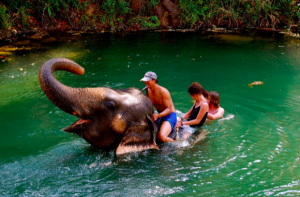 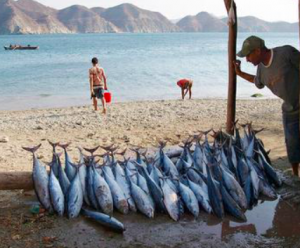