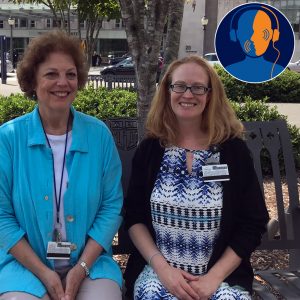 Sophia Smith, PhD, MSW, is a two-time cancer survivor, so she’s well acquainted with the anxiety that persists after treatment ends.

Through her research, she’s learned that many cancer survivors also struggle with post traumatic stress syndrome (PTSD). This led her to create an app called the Cancer Distress Coach.

In this episode of Voices of Duke Health, Dr. Smith is joined by Bridget Koontz, MD, who shares how her patients responded to the app.

Karisma Sriram: This is Voices of Duke Health. I’m Karishma Sriram. You’re about to hear from Dr. Sophia Smith. Today, she’s a researcher and teaches at the Duke School of Nursing. But she didn’t always imagine this path for herself.

Sophia Smith: My long story short is that I had grown up wanting to be a nurse. But when I was a teenager I was diagnosed with Hodgkin’s lymphoma and I was in treatment for two years. And when I was coming out of it I realized I really didn’t want to work in a hospital setting. And my other love was technology, so I went to school and and then upon graduation worked at IBM for over a decade. While I was at IBM, my husband and I were blessed with twin girls and when they were a year and a half old, I received my second cancer diagnosis—breast cancer. And at the time, we weren’t really sure if I was going to make it or not.

Karishma: Sophia and her husband decided that to maximize her chance of survival, she would leave the high-stress environment of IBM. So she went back to school—got her Master’s, then her PhD. And she started to get really interested in researching cancer survivorship.

Karishma: So Sophia dove headfirst into answering that question. And her research led her to create something incredible—an app, called the Cancer Distress Coach. Today, we’re gonna hear all about the app, but first, it’s important to understand exactly what Sophia learned from her research.

Smith: One of the things I was always deeply interested in were these symptoms that no one ever really identified, back in the day. So my treatments for Hodgkin’s were back in the 70s. And while I was in school, I started to talk with a lot of the instructors and other students there to describe what these symptoms were like, and they said, geez, you know that sounds a lot like PTSD. And I said to them, I said, oh, well isn’t that for people who’ve been in the war and have, you know, in combat? And they said, yes, but there’s also this recognition now that a life threatening illness can precipitate PTSD. And we did a cross-sectional study for my dissertation and we found quite a strong prevalence of PTSD in these cancer survivors.

So five years later we decided to follow up with these individuals. What we found was not only were the symptoms still there for about one in three, but in many, they got worse. And the other finding that we had, were that those that were at highest risk were nonwhite, low-income, and female. So that’s what, kinda, for me, tied everything together. Okay, now we know what the symptoms are. Now we know that individuals are at risk for this. We know who those who are most at risk for this. They don’t have the resources. How do we get them something that they can use that’s low or no cost and that can be with them in the moment. And that’s what led me to the doorstep of the National Center for PTSD, to say, hey, do you want to collaborate? So together we embarked on this project. So Bridget perhaps that’s how you and I met in the early days. In fact, most of our patients did come from your clinic at Duke Regional.

Bridget Koontz: Yeah, it was a great opportunity for our patients as well.

Karishma: That’s Dr. Bridget Koontz. She’s a radiation oncologist at Duke. And at some point she heard about what Sophia was working on—an incredible resource for cancer survivors struggling with PTSD or anxiety. And Dr. Koontz knew that many of her patients could really benefit from a resource like that.

Koontz: Most of my clinical practice is out of the community hospital in North Durham, and so it pulls from a relatively rural population and consequently I think, those are patients that can’t drop everything and get in here every week or every two weeks. And so having resources that are available to them you know at the tip of their phone make a lot of sense.

What we see as people come back after having had cancer—and it’s part of our job to coach them—is that there would be a fear that any time they had a tweak or a twinge that that could be a cancer recurrence, and that really feeds into a lot of anxiety. So we get a lot of phone calls the first couple of months when they finish treatment, and they’re not actually scheduled to be seen back yet, that they want to know well this hurts or I have a new rash, and we have to reassure them that everybody gets aches and pains and colds. And so one of the things that Sophia was telling us about her project was the idea that this would be a way to help patients cope with the day to day. And that was really the joy of having a product like this, is you were really- you were able to get people whenever they had that anxiety and they didn’t have to wait for a day to get a phone call back from the doctor to tell them it was okay.

Karishma: Then let’s talk a little bit about the app. What is the app, what does it look like, how do patients interact with it?

Smith: Version one, that was the version that the National Center for PTSD created for us at Duke. So it had educational content about cancer related PTSD. There was an assessment module using the PTSD checklist. The third module was the tools and activities. For example, if they’re having nightmares, they may get prompted to do some guided imageries to help them relax, or a muscle relaxation video. Importantly, we were collecting their distress level using the distress thermometer, and if they scored a very high number, we would immediately send them to a hotline that they could call and speak to a live person. Version two was a project funded by the Duke Institute for Health Innovation, in which they redesigned our version one app. So it greatly enhanced our reach to a national population.

Koontz: One of the things that I heard a lot about was, I think that third module, the toolkit, because I would hear about patients who use the various tools available for relaxation and for the management of their anxiety. When you looked at that data what what do you see? Are there certain things that are utilized heavily, more so than others?

Smith: That’s a great question. The guided imageries and the relaxation, I have to say, were the most used of all of the tools, because they were applicable to almost all the symptoms. The other thing I’m thinking of, Bridget, is usage. So do you want to guess when most of your patients use the app?

Koontz: I think you’ve told me this before, but I think a lot of them, it was in the evening, sometimes overnight.

Smith: Yeah, it was between midnight and 2 a.m. when they couldn’t sleep. So difficulty sleeping is probably the most common symptom within the PTSD symptom cluster. It’s just one of many. But it is one of the most prevalent, if not the most prevalent.

Karishma: Dr. Koontz, how did you patients respond to this app?

Koontz: Oh, they really loved it, and I think it really particularly hit home for my female cancer population. I see a lot of breast cancer patients. And that was a group where there is a lot of anxiety related to- because it’s a cancer that often doesn’t come with a lot of symptoms early on, and so there’s a lot of fear there. So they really enjoyed it and I think many of them have gone on to use the second version. We have flyers in our clinic so that if they’re interested, they can find it. I think Sophia has told me actually that not only is it available on a national level, she’s even had some folks internationally who have found that app.

Karishma: That’s amazing, honestly I am so happy hearing all of these different types of people that you’ve been able to reach. I’m curious, Dr. Koontz, how has this changed the way you practice medicine or the way that you interact with your own patients?

Koontz: Well, I don’t think it’s changed a lot of the direct interactions, but what I think it does is, you know, we have a 20 minute or- I’m lucky, I get a 30 minute appointment with my follow up patient. And I think that in that 30 minutes, we have to cover everything: I have to screen for recurrence, I have to screen first new symptoms, I have to screen for health behaviors. And then I have to address any questions that the patient has. So that’s a lot to go over. And honestly what this app offers, is it offers a solution to one of the problems that people raise. Alternatives before this app would be referral to psychiatry or psychology. And not only was that, I think, just a big barrier, because it’s seen in some ways- people view that as a weakness, that they would need that. And so many patients would just say, no, no, I’m fine, I don’t need to go there. But I think also, it’s actually very difficult to get those appointments and get those patients into that clinical space. And so this was a resource where I actually had something we could offer, and that I could offer it, rather than just doing a referral. And so that, you know, that definitely feels good to me. And as I said the uptake and the patients who need it- it has been very positive.

I think one of the other things that this collaboration has brought is the idea of what we want to do next, right? The other thing we have a lot of in North Carolina is obesity. So one of the things that we’ve looked at is how to help cancer survivors, specifically, be more active. And so I have a pilot study that was funded through my department where we gave people Fitbits. And they got text messages on a daily basis reminding them about how to be active, and giving congratulations when they’d done a good job the day before. Exercise is a great treatment for anxiety. So one of the things that we are talking about now is, is there a way that we could take what we’ve learned from the Cancer Distress Coach, add in some physical activity modules and build the next version that would that would even be a little bit broader.

Smith: I’m really excited about that.

Karishma: Thank you guys again, Dr. Smith and Dr. Koontz for joining us. What an amazing project you guys have done and you guys have impacted so many people. And I know that that has motivated you to continue going and that’s really inspiring to see, so thank you for joining us.

Smith: Thank you so much for having us.