Off the Hook? The Impact of NGO Service Provision on Domestic Politics

While the importance of service provision has been a central topic in political economy, there has been far less investigation into the political effects of service provision by non-state actors. Despite a long history, this question has gained renewed relevance due to the rise of development NGOs. I argue that NGOs can have a positive effect on citizen support for incumbent governments. Rather than seeing NGOs as substitutes for the state, citizens see NGOs as a resource controlled by powerful government actors, and they reward these powerful government actors for their presence. I provide evidence that increased access to NGO services can decrease protests against the government, increase the vote share of the political executive, and improve perceptions of the executive’s performance. In Uganda, I show that citizens believe the president has power over the distribution of NGO projects and give him credit for access to NGO services. I also present evidence that access to NGO services influences preferences over service delivery, and citizens with access to NGO services prefer that a larger share of the country’s services be delivered by NGOs. 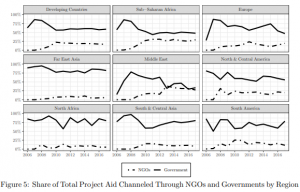 Chapter 3: NGO Service Delivery and Citizen Health
In Chapters 1 and 2, I describe the emergence of NGOs in Africa and their role in service delivery, and I present a theory of their political consequences. Before examining their effects on political economy, I begin by providing substantial evidence that development NGOs are effective at increasing access to health services and improving health outcomes. I begin with cross-national time series data on levels of funding for service delivery projects received by NGOs and citizen access to important health services from 46 countries in Africa over a 15 year period. Using two-way fixed effects, country-specific time trends, and a lagged dependent variable, I show that increases in funding for service delivery projects implemented by NGOs is associated with increases in access to health services. Furthermore, I use multiple leads and lags of the independent variable to show that this relationship is absent in the year funding commitments are made and in years prior to the commitment (when projects are not yet active) and is only apparent in the year after a commitment is made (when projects are likely to be active). Finally, I conduct a placebo test showing that this relationship is absent when looking at funding for civil society projects.

To bolster these results, I ‘zoom-in’ to Uganda to assess the relationship between proximity to NGO projects and disease prevalence and disease burden. Using original data identifying the location of NGO-implemented foreign aid projects and panel survey data on health outcomes, I use a difference-in-differences design to show that both disease prevalence and disease burden decrease for individuals within the catchment area an aid project. I also show that this positive relationship dissipates rapidly as distance from an NGO project increases, bolstering a causal interpretation of the results. These findings demonstrate the high value of NGO-provided services and illustrate the potential for NGO service delivery to have significant political consequences. After establishing the positive effects of NGOs on health access and outcomes, I proceed to investigate their political effects.

Chapter 4: NGO Service Delivery and Political Protest
In Chapter 4, I investigate the relationship between levels of NGO service delivery and the frequency and duration of political protests using the same cross-national data from Chapter 3. In this chapter, I present evidence that incumbent governments benefit from NGO service delivery through a reduction in political protest activity. Using two-way fixed effects, country time trends, and a lagged dependent variable, I show that increases in funding for service delivery projects implemented by NGOs is associated with decreases in levels of protest activity. The potential for NGO delivered services to increase satisfaction with incumbent governments and reduce the occurence of these rare but destabilizing events signifies a profound political benefit for governments in countries where NGOs are active.

Chapter 5: The Impact of NGO Service Delivery on Elections
In Chapter 5, I explore how aid-funded NGO projects are allocated subnationally, and I show that access to these services increased the incumbent President’s vote share. I code 2,426 aid project locations in Uganda for whether they were implemented by a recipient-government ministry or an NGO. I match projects with nearly sixty variables from the 2002 Ugandan census and administrative data capturing parish-level social, geographic, and economic variables. Using these data, I apply machine learning approaches to investigate the characteristics associated with NGO project allocation. I then match these project locations with returns for 4,562 parishes from three successive general elections and use spatial fixed effects and difference-in-differences designs with matching to show that increases in NGO service delivery lead to increased electoral support for the president. 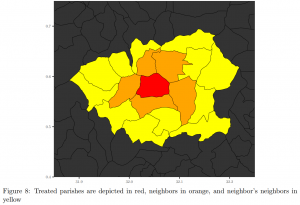 Furthermore, point estimates on these spatial lags allow me to conduct a spatial placebo test by showing that the effect of aid projects on electoral outcomes is isolated to recipient parishes and possibly to their immediate neighbors (to a lesser degree), but this effect is entirely absent in parishes that share a border with neighbor parishes but not with treated parishes. I find no evidence that having access to an active NGO project reduced electoral engagement or generated political credit for incumbent Members of Parliament. 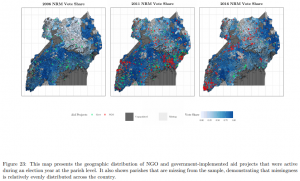 Chapter 6: The Impact of NGO Service Delivery on Beliefs
In Chapter 6, I use an ‘ancillary’ field experiment to investigate the mechanisms driving findings in previous chapters. First, I show that a large, randomized NGO-implemented community health worker intervention resulted in political credit for the incumbent President, although not for any other government actors. I also provide evidence that this credit is motivated by a belief that the President has a direct role in the allocation of NGO projects. Second, I use both attitudinal and a behavioral measure to show that the NGO intervention caused a change in citizens’ preferences over the proper role of government in health service delivery. Respondents in treatment villages reported a clear preference for NGOs to play a larger role in the delivery, although not necessarily the financing, of health services in the country. Encouragingly, there is no evidence that NGO service delivery depressed political engagement and there is considerable evidence that the NGO program was a complement to parallel government activities.

I am currently working to build on the findings from this chapter in two ways. First, I will match spatial survey data measuring the political attitudes and behavior of 7,200 Ugandan citizens between 2006 and 2016 with original data on the precise location and ownership of all health facilities in Uganda over this ten-year period. This will allow me to investigate the effect of healthcare infrastructure on a range of self-reported political behaviors and attitudes that can further illuminate these mechanisms. Second, I am seeking funding to conduct a second original survey in 500 villages enrolled in a scaled-up version of the randomized intervention evaluated in this chapter. This scaled-up replication will join a growing body of cutting-edge scholarship that emphasizes the importance of replication and scale in experimental research. 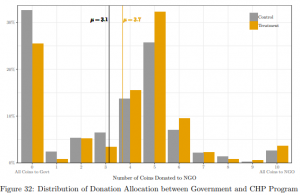 Chapter 7: The Impact of NGO Service Delivery on the State
Finally, I plan to investigate how chances in citizen beliefs and behavior affect the incentives and behavior of government actors. This chapter will combine data on NGO project and health facility locations with highly disaggregated budget data to uncover whether NGO activity crowds-in or crowds-out government investments in service delivery and infrastructure. To further explore the effects of NGO activities on government behavior, I also explore data on the expansion of government infrastructure in villages enrolled in the randomized intervention evaluated in Chapter 6. These results will provide critical insights into the normative significance of NGO service provision.