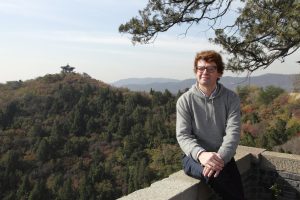 This reseach topic has been my major focus for the past decade, funded in part by grants from Queen’s University, the Social Sciences and Humanities Research Council of Canada, and partnerships with associations such as the Forum on Religion and Ecology, the Max Planck Institute for Religious and Ethnic Diversity and CERES-21 (Creative Responses to Sustainability).

In 2012 I co-organized a conference on Religious Diversity and Ecological Sustainabilty in China, hosted by Minzu University in China, with funding from the Max Planck Institute for Religious and Ethnic Diversity. The conference brought together key scholars of religion, secularization, and China’s minority nationaliies to paint a comprehensive picture of China’s contemporary imagination of nature and environment. We are examining how dominant cultural traditions of Buddhism, Confucianism and Daoism continue to influence Chinese thinking about nature and environment, how these traditions interact with normative discourses of science and modernity, and how China’s minority nationalities construct their own unique relationships with the natural environment. This conference resulted in a book on Religion and Ecological Sustainability in China, that was published by Routledge in 2014.

From 2009 to 2011 also worked with CERES-21, a multi-country, multi-discipinary research program funded by the Norweigan Research Foundation, and based at Oslo University. The program aims to generate creative responses to sustainability issues in China, Ghana and Norway, and brings together scholars in the fields of culture, energy and business. As part of the project, I have written articles and contributed to two conferences, one at Stanford University in 2010, on Reclaiming Ecological Wisdom for the Crisis of Our Time, and also the Oslo Sustainabiltiy Summit: The Age of Stupid or the Age of Wisdom in 2011.

Miller, James. 2013. “Is Green the New Red? The Role of Religion in Creating a Sustainable China.” Journal of Nature and Culture.

Miller, James. 2009. “Religion, Nature and Modernization in China” in Technology, Trust and Religion edited by Willem B. Drees. Leiden: University of Leiden Press.

Miller, James. 2001. “Envisioning The Daoist Body in the Economy of Cosmic Power.” Daedalus (Journal of the American Academy of Arts and Sciences)