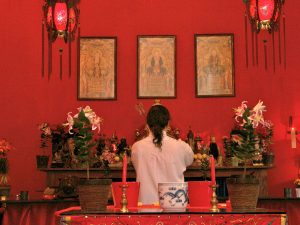 A priest at the Daoist temple in Rio de Janeiro

As Daoism spreads around the world it is evolving into new forms and creating cultural hybrids. In 2001 I interviewed leading American qigong practitioners for a web-based video teaching resource, American Daoist Cultivation, which I also discussed in a article on teaching Daoism to contemporary North American college students, co-written with Elijah Siegler.

In 2009 I travelled with my graduate student, Dan Murray, to conduct research into a lineage of Orthodox Unity (Zhengyi) Daoism in Brazil. We visited templed in Rio de Janeiro and Sao Paulo and conducted interviews and focus groups with community leaders and practitioners.

Although Daoism has a long history within China, it has only recently begun to spread outside of Chinese communities. In Brazil, Daoism has entered an already pluralistic world of religions that, while primarily Roman Catholic, also includes Afro-Brazilian practices like Umbanda and Candomble, and more recent additions like Tibetan Buddhism and the Japanese new religious movement Kofuku-no-Kagaku.

Priests, teachers, and practitioners from three groups in Sao Paulo and Rio de Janeiro were interviewed as part of the study. The Grande Triade, which teaches Daoist inner alchemy and qigong, and the Liu Pai Lin (Liu Bailing) Tai Chi Centre both focus on teaching Daoism through traditional Chinese body technologies. These groups see the physical exercises as more important than the typically religious activities associated with Daoism. At the Daoist Society of Brazil, on the other hand, ritual services are performed and offerings are made to Daoist deities, in addition to classes about Daoist texts and physical exercises.

Wu Jyh Cherng founded the Daoist Society of Brazil in 1991 as part of the Orthodox Unity (Zhengyi) lineage of Daoism. He was born in Taiwan and immigrated to Brazil with his family, later returning to Taiwan for training as a priest. Although Cherng died in 2004, the society continues, and is now run completely by local Brazilians.The two head priests first studied under Cherng and later received intensive training in Taiwan. The society is comprised of two temples, and is probably the only Zhengyi lineage group run by non-ethnic Chinese. It offers a unique insight into Daoism outside of Chinese communities.

The research investigated how Daoism has been adopted as part of the identity of these Brazilians, and how they have adapted the practice of Daoism to fit their own culture. For the Daoist Society of Brazil, it is important to maintain the traditions of Zhengyi Daoism brought from Taiwan, but they have consciously decided that for Daoism to succeed in Brazil some elements must change. Brazilians are not familiar with the ideas and practices of Daoism, and the priests try to accommodate this. The silent laity sitting in orderly rows during a service on Sunday morning may appear to have more in com-mon with a Christian church service than any Chinese religion, but the deities, chants, and rituals from Daoism all remain.

Additionally, the research examined the relationship between Daoism and Chinese culture, and whether the spread of Daoism can offer a bridge between cultures. Taking part in Daoist practices for philosophical, religious, or health reasons has led some to become interested in wider Chinese culture; however Daoism itself is still described by interviewees as a practice that, to some extent, can be detached from Chinese culture and practiced by anyone in the world. Brazil has presented a multitude of ways that Daoism can be spread and understood outside of China.

Murray, Dan and James Miller. 2013. The Daoist Society of Brazil and the Globalization of Orthodox Unity Daoism. Journal of Daoist Studies 6: 93-114.