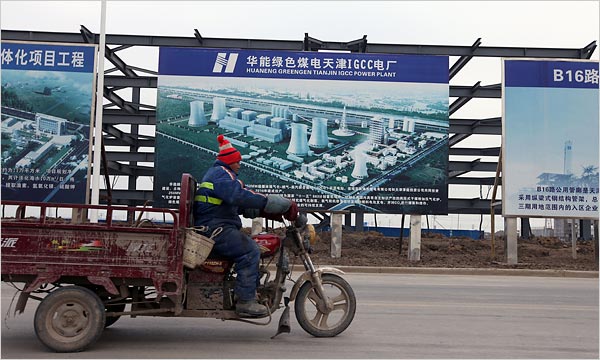 A poster announces a power plant to be built in Tianjin, China.

On Sunday the New York Times published a report,  China Outpaces U.S. in Cleaner Coal-Fired Plants, which documented China’s transition to cleaner forms of energy. Although much of China’s energy needs are still met by inefficient coal-fired power stations with poor track records in terms of emissions, China has begun to invest heavily in cleaner coal technology with a view to improving efficiency and reducing emissions. The effect of this transition is already being taken into account by climate forecasters.

China’s improvements are starting to have an effect on climate models. In its latest annual report last November, the I.E.A. cut its forecast of the annual increase in Chinese emissions of global warming gases, to 3 percent from 3.2 percent, in response to technological gains, particularly in the coal sector, even as the agency raised slightly its forecast for Chinese economic growth. “It’s definitely changing the baseline, and that’s being taken into account,” said Jonathan Sinton, a China specialist at the energy agency

Buried innocuously in the middle of this report was the startlingly frank statement of Cao Peixi, president of the China Huaneng group, China’s largest state-owned electric company:

“We shouldn’t look at this project from a purely financial perspective,” he said. “It represents the future.”

The $64,000 question facing economists and politicians across the world is how to make decisions that take into account the big picture beyond the “purely financial perspective.” The classical economic models that have been adopted in the West in the modern period find this a hard question to answer. The reason for this is that they are rooted in an enlightenment view of the self as an autonomous, rational individual. This view of the self is at best a philosophical ideal. It does not take into account the fact that humans are social creatures who make decisions based on the welfare of others as well as themselves. Neither does it take into account the fact that humans do not always make rational decisions.

The recent field of behavioural economics aims to address this latter question by studying how people actually make decisions. In so doing it aims to put economics on a hard factual footing rather than being based on assumptions of what ideally human beings are supposed to do.

And from a Confucian perspective, the intriguing question is also the extent to which the living should honour the memory and respect the interests of the deceased.

Taking into account the interests of ancestors as well as future generations reveals the Confucian view of the self, a self that is not wholly autonomous but a self that is implicated in a genealogy of filial relationships. To the question, “Who am I?” the Confucian answers, “I am the child of my parents and the parent of my children.”

The question facing China’s intellectuals at the moment is how to take this model of the self into account when it comes economics and politics. Consider Daniel Bell’s report of the views of a leading Confucian intellectual, Jiang Qing:

[Jiang] argues for a democratic institution that would offer more opportunities for political participation, while criticizing democracy for being too narrowly focused on the interests of the current generation of voters.

Jiang proposes another political institution designed to represent non-voters whose interests are typically neglected in democratic states, such as foreigners, future generations and ancestors. Is democracy really the best way to protect future victims of global warming, he asks?

The reality of global climate change is forcing people across the world to realize that economic or political decisions based solely on the interests of individual living humans are ultimately doomed to failure.

Currently, the British parliamentary system is gripped by the question of MPs’ fiddling their expenses, while Canada holds an inquiry into former prime minister Brian Mulroney’s shady financial dealings. Both these scandals demonstrate that we are obsessed with personal moral failings.

But surely these pale in comparison to the moral failure of the Iraq war, and our moral failure to grapple with the devastation of the environment.

This entry was posted on Wednesday, May 13th, 2009 at 9:51 am and is filed under Blog, Conferences. You can follow any responses to this entry through the RSS 2.0 feed. You can leave a response, or trackback from your own site.