Bioprinters are specialized 3D printers used to print tissue-like materials and cell matrices. Unfortunately, high-tech devices can still run into low-tech problems. A group of graduate biologists at Duke bought a gel matrix extruder head for their bioprinter only to find that as the print head located itself during the pre-print calibration routine, the extruder struck the polycarbonate door of the printer, knocking it open and causing the routine to halt. They were clever enough find a way to trick the printer into thinking the door remained closed, but they wanted a better solution.

Fortunately, low-tech problems can have low-tech solutions. After visiting the lab and seeing the printer’s problem firsthand, it became clear that the issue could be resolved by simply offsetting the door forward by about an inch or moving the print head’s limit switches back by an inch. The latter would reduce the effective print area, so we chose the former.

The irregular shape of the bioprinter complicated the design slightly, but the real challenge came from the graduate group’s short timetable and desire to attach the one inch insert without damaging their expensive machine; there could be no new holes for attaching to the printer. With the input of my peers in DesignHub (a group of students at Duke that helps researchers and other clients design and prototype parts), I decided to solve the problem without fasteners; a series of friction fits would firmly secure the 3D printed pieces of the insert to existing structures on the printer.

This approach would have been absurd before the advent of inexpensive, accessible 3D printing. The bioprinter’s odd-shaped outer body was assembled with little precision and challenging to measure precisely, making iteration and adjustment of insert dimensions critical to success. What’s more, the orthogonal dovetails I employed to lock pieces in place without fasteners would have been unreasonable to injection mold even if the parts needed to be made at scale. Using my makerspace’s free 3D printers, however, I could produce a new prototype every day or two, iterating rapidly to converge on a set of dimensions that produced a puzzle-piece-like fit. 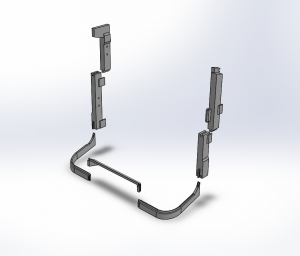 Completed in just a few weeks, the bioprinter insert was one of the quickest jobs to go through DesignHub, and it cost the client nothing. Though it was a simple project, I thoroughly enjoyed exercising my spatial skills and delivering an elegant solution.