Designing and building Cthulhu, the Duke Robotics Club’s 2019 fully-functional competition AUV, took every spare hour of the 2018-2019 academic year, but our young team did it. Fully functional, however, does not mean perfect. At the end of the year, Cthulhu sported a few hurriedly designed parts that helped her float in the right orientation but reduced her available actuator mounting space and increased her weight. Although she suffered no major mechanical failures at the RoboSub competition, we knew before we flew home that the fall would be time for Cthulhu 2.0.

Before the semester started, I began working on the most fundamental part of the upgrade: Cthulhu’s structural frame. I lengthened the main side pieces in both directions, changing geometry and part mounting positions to bring the center of mass closer to the center of volume and promote easy actuator mounting. Because of our fabricator’s long lead time, I prioritized getting the drawings to them early so we could get the finished parts and begin testing long before our deadlines. 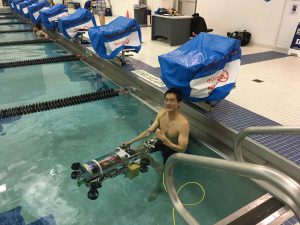 Frank and Cthulhu 2.0 in the pool on Febraury 15 for controls testing

As a junior and second-year leader of the mechanical team, however, I also began to focus on enabling other mechanical team members to do their best work. In stark contrast to the previous semester, I spent most of fall 2019 supporting other’s designs and teaching CAD and fabrication skills to new members. It quickly became obvious how much more we could achieve with better membership retention and commitment, both of which rose as club leadership team made a concerted effort to improve our onboarding and management systems. At the end of the semester, results could not have been better; the mechanical team had equipped the robot with elegantly designed actuators and a precise buoyancy management system, making Cthulhu 2.0 look and function like a whole new robot.

Although our hopes of competing in 2020 were dashed by COVID-19, we did not let social distancing stop us from making progress. Long before we were told not to return to Duke, the mechanical team had started the process of designing an entirely new robot, which we planned to finish building by the start of 2021. With Cthulhu 2.0 nearly competition-ready, we pivoted to focus entirely on the design of the new sub and even continued working through the summer, meeting at least once a week to keep our momentum going.

Now in my last year as mechanical team lead, I look back and marvel at how far the robotics club has come since I first joined it. The team is maturing both in terms of members’ knowledge and in the systems we have in place for transferring that knowledge. In some sense, the Duke Robotics Club itself is in its version 2.0, and we continue to innovate and add capabilities that will make us a top contender in years to come.

Read our 2020 Technical Report, part of our submission to the virtual competition.