As a freshman, I knew I wanted to join a project team where I could learn engineering skills, take on a complicated design challenge, and build something real. That’s exactly what the Duke Robotics Club (DRC) offered. The club’s primary focus is designing, building, and programming an autonomous underwater vehicle (AUV) for the annual international RoboSub competition.

I spent my first year designing, prototyping, and fabricating an actuator for the club’s autonomous underwater vehicle and familiarizing myself with Solidworks, 3D printing, and manual machining. Near the end of the year, I was appointed leader of the club’s mechanical division; the jump from being in charge of one actuator to being in charge of coordinating the structural design, construction, and waterproofing of the entire robot happened quickly. A major change in our competition’s rules also meant the club needed to build a new robot – something that hadn’t happened in three years. I spent the end of my first year trying to pick up as much information about thermoplastics, epoxies, and O-rings as possible from the team’s elders. 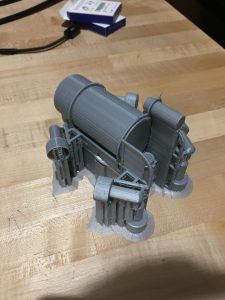 After a summer abroad, I came back as a sophomore and, with my team, jumped right into the design process for the new robot. Over the course of the year, we moved from making big-picture design choices and purchasing decisions to making detail drawings and spending our few free hours with a CNC mill. Along the way, the challenges were many. I struggled with the balance between completing critical tasks and engaging prospective members. Every new fabrication process we tried went wrong the first time. Long lead times and close deadlines added stress to an already-overloaded spring semester. 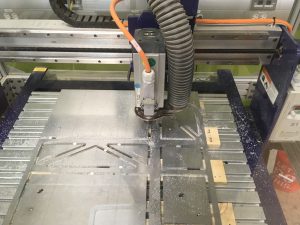 On this low-horespower machine, Cthulhu’s side frame pieces took many hours to cut.

Around the time that we were running into our most significant fabrication issues, a guest speaker in my technology commercialization class emphasized the the following: Results = Results. Results ≠ Lack of Results + Excuses. As the one ultimately in charge of making sure the mechanical team hit its deadlines, I had a responsibility even for the work I delegated. In one case, to get the robot ready for in-pool testing, I had to do in a week what one of my teammates had done in a month: redesign and fabricate diagonal thruster mounts, which are some of the most critical and intricate parts of the robot’s structure. 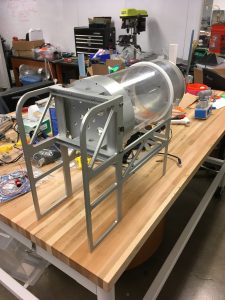 Cthulhu’s structural frame and main capsule. Without any electronics, the robot is very light!

Needless to say, I put in a lot of hours – more than 300 over the course of my sophomore year. Dozens of those went into leading the team through a painstaking and objective design process. Dozens more were spent learning to use software for FEA and CNC machine control. I became one of Duke’s highest-volume users of our shared 3D printers, and my teammates have accrued even more print hours while prototyping solutions to tasks I directed their way. Most importantly, however, my team and I succeeded in building a new robot. All our hours paid off at the first pool test, when we had the thrill of driving our remarkably speedy submersible through our gym’s swimming and diving pools. Because of the wires protruding from its “face,” we named the robot Cthulhu after a fictional sea monster. 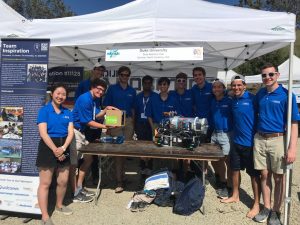 DRC at the 2019 RoboSub competition

In the summer of 2019 (following my first year as mechanical team lead), DRC took 11 members to the international RoboSub competition in San Diego. A frenzied week of code writing, pool tests, and quick repairs got our young team to the semifinals. Although we didn’t come away with any prize money, we set ourselves up to have an even more successful year in 2020.

Read our 2019 Technical Report, part of our submission to the 2019 competition.