Rally to Ruin the Planet 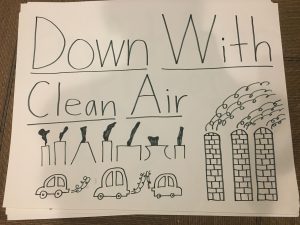 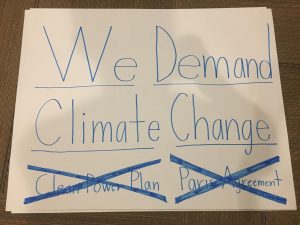 Throughout the “Create, Innovate, Act” course, I worked on a satirical fossil fuel rally to energize current environmental advocates and engaged new ones. I thought of the idea after watching a video about Billionaires for Bush, a campaign designed to highlight Presidential Candidate George W. Bush’s support of policies helping the wealthy at the expense of everyday Americans. The campaign used slogans such as “Widen the Income Gap” and “There are millions more jobs to cut” to convey their message. Being inspired by this comedic advocacy tactic, I explored its usage for environmental initiatives. Climate change is an issue that I am very focused on, but despite increasing awareness, little has been done to decrease the usage of fossil fuels: the primary driver.

I devised, organized, and executed a “Rally to Ruin the Planet” where participants would give anti-environment, anti-human health and pro-pollution, pro-fossil fuel speeches. We held posters with slogans such as “Down With Clean Air,” “We Demand Climate Change,” and “Pollution is the Solution” to convey our supposed position, while clearly being satirical. We also passed out flyers to convey our actual stance that coal, oil, and natural gas hurt people and the planet and that we support a greener future. Over 50 people came through the rally, and multiple attendees became so interested that they gave speeches to “support” the cause. We raised awareness of an important environmental challenge in an interesting and engaging way, and provided ways to take further action. 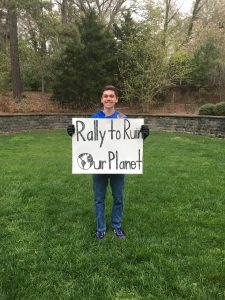 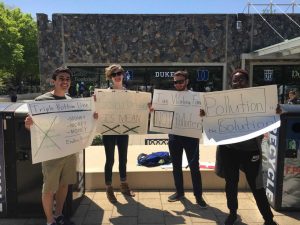