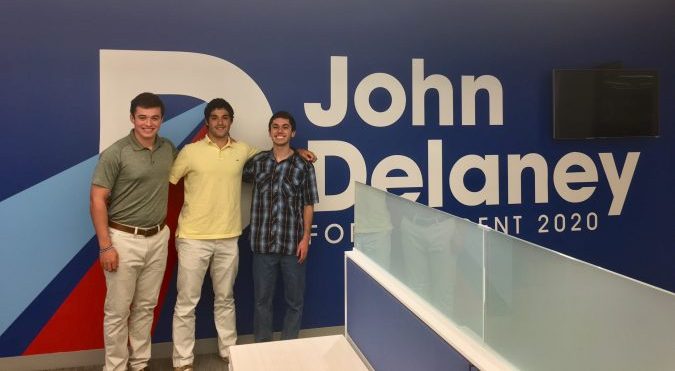 During the Summer of 2019, I interned on John Delaney’s Presidential Campaign. I am honored to have been given the opportunity to advocate for such a passionate, qualified candidate and his vision for the future.

My support for Representative Delaney began nearly five years ago, when I volunteered on his congressional re-election campaign to continue serving Maryland’s 6th district. I knew very little about U.S. politics but enthusiastically made calls to vote for Delaney, having learned that he was a proponent of environmental protection. The Congressman asked me to intern for his District Office that following summer, during which I initiated and helped organize a Climate Change Workshop. At this event, I was inspired by Delaney’s vision for politics as an arena to bring people together for positive change.

When I learned that Representative Delaney was running for President two years ago, I couldn’t hold in my excitement; I remember beaming around the streets of Washington D.C., calling anyone I thought of to share the news with. It is with this same enthusiasm that I joined this campaign to do whatever I could to help Delaney become the President of the United States.

My responsibilities as an intern have depended greatly on what was going on in the campaign on a given day. I worked on a variety of policy, communications, fundraising, and voter engagement tasks.

I really enjoyed conducting policy research for the campaign, particularly regarding plans to combat climate change. I agree with Congressman Delaney that most important tool for climate action is putting a price on carbon (i.e. carbon fee). This policy is the only way to ensure decarbonization occurs throughout the economy, and Delaney has a comprehensive plan to return all the revenue to the American people. 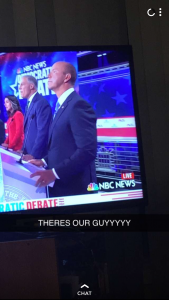 Recognizing the importance of the debates for Delaney to introduce himself to the American people, I took the initiative to draft potential opening and closing statements for the candidate to use. It was a challenge to highlight John Delaney’s experience, policy positions, and vision for the country in a memorable fashion all within 60 seconds. Any phrase could easily end up on the nightly news, so I tried to be intentional about every word I wrote. Specifically, I aimed to highlight Delaney’s focus on sensible solutions for health care, climate change, and economic opportunity; building on past successes while proposing bold new ideas.

Some of my other tasks throughout the summer included:

I have multiple important takeaways from my internship experience. First, I have reaffirmed my interest in impactful, unifying policies. I agree with Delaney’s policy approach, proposing substantive and politically viable solutions while avoiding purely symbolic, partisan resolutions. I hope to carry this approach forward as I seek to influence environmental policies throughout my career. Second, I appreciate the ability to take initiative and contribute ideas. One of my greatest strengths is thinking outside of the box to devise innovative solutions, and I realized the importance of being in an environment where this is encouraged. Third, I need to make the most of every opportunity, regardless of what it may be. You never know what you will learn or what you will gain from a new experience. 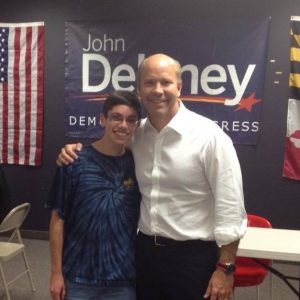 I want to thank the campaign staff for their support this summer. I am fortunate to have been part of the team working to elect John Delaney as President. Finally, I want to thank Congressman Delaney, not only for his “Focus on the Future” in the Democratic Primary, but also for supporting my future ever since I was making calls on his re-election campaign back in high school. I wish him the best of luck in this election and in everything to come.

I hope you will learn more about John Delaney and his vision for America.