My experience at the 1st International Conference on Environmental Peacebuilding

Studying abroad at the Arava Institute for Environmental Studies, I became interested in the concept of environmental peacebuilding. This program was based on the idea that concerns over water, land, and energy contribute to the Israeli-Palestinian conflict, and that recognition of mutual interests can yield cooperation with and empathy for “the other.” Since returning to the U.S., my interests in foreign policy and “building bridges” have continued to grow.

With graduation rapidly approaching, I am dedicating a significant amount of time to the job search. I know that I want to work in the environmental field but am considering a variety of paths within it. As I started looking for opportunities at the intersection of environmental policy and international affairs, I discovered that the 1st International Conference on Environmental Peacebuilding was taking place at the University of California, Irvine in late October. 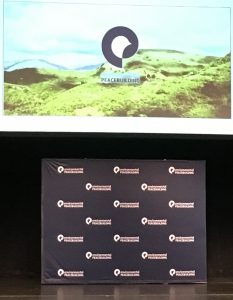 I instinctively jumped at the opportunity, especially after discovering that my Duke professor Erika Weinthal was one of the conference organizers. Thanks to the generosity of the Duke University Center for International and Global Studies, the Duke American Grand Strategy program, and my parents, I was able to register and book plane tickets and a hotel room.

My conference experience began with a session titled “Conflict-Sensitive Conservation,” where we discussed processes stakeholder engagement and conflict prioritization. The session was mostly filled with practitioners working across the globe from Columbia to Myanmar who shared some of their experiences in the field. It was interesting to consider in a case study on a land dispute in the Democratic Republic of Congo (DRC), and discuss each stakeholders’ position, interests, needs, and resources, an exercise which can be applied to a variety of fields.

After an introduction by the President of the Environmental Peacebuilding Association and the United Nations’ Environmental Program Executive Director via Skype, the conference officially began with a panel on the importance of environmental peacebuilding. I was especially interested in hearing from Sherri Goodman, the first Deputy Undersecretary of Defense for Environmental Security who coined the term “threat multiplier” as it relates to climate change exacerbating national security challenges, and whom I later got to speak with about her experience.

The second day began with a talk about conflict in Columbia, specifically how natural resources contributed to the struggles and changes since the peace agreement signed in 2016. It was really difficult to learn about how millions of people have been affected either by displacement, disappearance, or death. From the outside looking in, it’s hard to understand such virulent hatred and violence. At the same time, it made me realize the challenges associated with trying to engage in an external conflict, lacking adequate understanding of the forces at play. 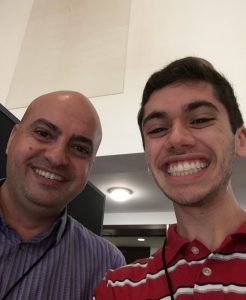 I then attended a session discussing content I’m (relatively) more knowledgeable about: the Middle East. The Israeli Director of EcoPeace Middle East, a non-profit organization that brings together Israeli, Palestinian, and Jordanian environmentalists to promote sustainable development and peace efforts, spoke about the organization’s work in the region. With a clear parallel to my studies at the Arava Institute, it felt nice hearing about the type of efforts I was fortunate enough to have been exposed to and actually reconnected with some Arava alumni at the conference (as shown to the right). At the same time, I realized how my background as an American situates me differently than it would for people who grew up in the region.

My final day began in a way I certainly did not expect. As I headed to breakfast at the hotel, I saw a fellow conference participant who said they were headed to a young professional’s breakfast at the conference. I excitedly joined and met the other young people at the conference. Though I believe I was the only undergraduate student in attendance, it was nice being surrounded by people who were in relatively similar situations as I was. At the breakfast, I met someone who has been deeply involved in the Brexit negotiations, leading to a two-hour conversation all about the history, structure, and challenges in the United Kingdom along with the future of American politics.

I attended multiple fascinating sessions that day. The first one I went to began with a presentation by an Organization for the Prohibition of Chemical Weapons staff member. He began with some scary information. After World War II, unused chemical weapon materials were frequently placed in lead containers, taken on a ship, and dropped in the ocean. Many problems have resulted from these actions. Over the years, the lead containers have started to decompose, releasing both lead and the chemical weapons materials being held into the open ocean. While captains were supposed to release the contents at least 100 miles outside their countries’ respective exclusive economic zones, they frequently just waited until the shore was out of sight and dumped the containers, so their locations remain largely unknown. A map was shown of the locations of known chemical weapons material dumping sites, and they are across the entire U.S. and European coasts, as well as along Southeast Asia, Japan, and Australia. 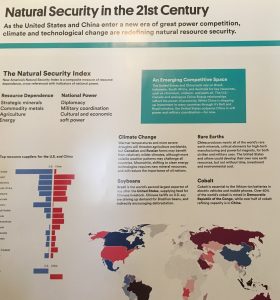 I was equally interested in a presentation about 21st Century resource conflicts and national security. Created by staff on the Resource Security program at New America, a centrist think tank in Washington D.C., the presentation discussed the trade relations and resource access of the United States and China. Both countries heavily rely on Brazil, South Africa, and Australia. They also have large trade relationships with each other’s close allies (i.e. China trading with Canada and the U.S. trading with Russia) and directly with one another. These dynamics create significant vulnerabilities and tension when exploited, such as the Trump Administration’s China tariffs, but also opportunities for collaborate.

Another fascinating component was learning about the rare earth metals such as cobalt and lithium which are necessary for renewable energy technologies, ironically positioning environmentally destructive mining as the key to a clean energy future. These minerals are prevalent in the DRC, Chile, Argentina, and China, putting the U.S. at a clear disadvantage in obtaining what it needs for decarbonization. The presented who previously worked at the Pentagon dispelled the myth that the military acts as a climate leader; while it may be more willing to accept climate science, she explained that climate is not treated as a priority during Pentagon decision-making, despite its security implications. I was struck by these ideas and became very interested in contributing to future research and subsequent policy impacts, along with the broader objective of redefining “national security” to encompass social, economic, and political welfare.

As the conference concluded, I felt uneasy about telling people goodbye. While I had only been there three days, the organizer’s concluding words about having created a “community” felt true. I am now part of the Environmental Peacebuilding Association’s Young Professionals Interest Group and plan to stay in touch with many of the amazing people I met. I’m fortunate to have attended the conference and am thankful to those who made it possible. I look forward to seeing how the people I met and the information I learned impact my professional and personal growth. 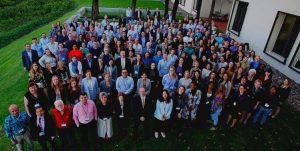