Judaism: From My Home to My Homeland 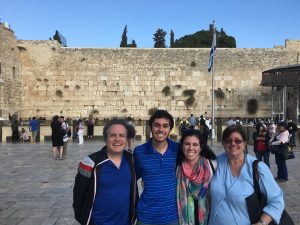 My family at the Western Wall

I’ve been really debating about what to write about in this blog post. At first, I planned to focus on my identity as a Jewish American Zionist environmentalist. Then, I thought about discussing a vision which popped into my head during a recent Environmental Peacemaking conference: imagining all of the world’s leaders surrounding an Israeli Prime Minister and Palestinian President finally making peace, standing below the flags of their respective state, to live side by side in harmony. In the latest draft, I began by describing my experience camping out in the Negev and sitting by the campfire as rockets were exploding and military planes were flying across the night sky.

Instead, I’ve chosen to take a step back; not just from the last two weeks, but also from last two months. What brought me here in the first place? The simple answer is that when I was in the college search process, I found the Arava Institute on the University of Maryland’s Institute for Israeli Studies’ website. I remember being intrigued by the intersection of two of my passions, Israel and the environment, largely unaware of the nexus between them outside of Israel’s technological innovation. After beginning my time at Duke, I encountered the Institute’s work on a variety of occasions. I saw the pamphlet at the Freeman Center for Jewish Life, attended a JStreetU event with Arava alumni, spoke with Duke students involved with the Institute, and organized an event through Environmental Alliance last year. These culminated with a nearly six month process of convincing Duke’s Global Education Office to count the program as part of my undergraduate educational experience. I firmly believed that my coursework and activities would be deeply connected to my studies in Environmental Science and Policy, Innovation & Entrepreneurship, and Economics, as well as my personal development as a Blue Devil. 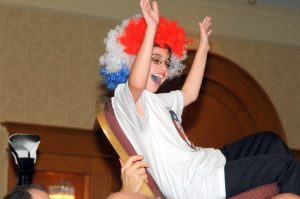 Being lifted during the hora at my Bar-Mitzvah

Backing up even further, much of my intrigue to the Institute begins from my childhood. Judaism has always been an integral part of my identity. Although I dreaded going to Hebrew School and played with paper clips in services, my Bar-Mitzvah was a turning point. Unlike most of my friends, I enjoyed my service more than the party. I loved the theme of “Elliott’s All American Bar-Mitzvah” with my face as Uncle Sam for t-shirt giveaways inside national monuments for table centerpieces and dancing to my favorite music at the time, such as Low by Flo Rida and DJ Got Us Fallin’ in Love by Usher. But, being called to the Bimah for the first time was something I will never forget: confidently reciting my Torah portion, giving a D’var Torah speech about my Parsha involving the Red Heifer and how I was proudly vegetarian, and having my family smiling at me, both from the seats in the synagogue and my Grandpaw from heaven. I may not have realized it at the time, but this was the start of the Jewish journey I continue to this day. I started to treasure Shabbat dinners on Friday night with my family—putting on our Yarmulkes, lighting candles, drinking grape juice, eating Challah, and singing Bim Bam. I began realizing that my sister and I lighting our felt Channukiahs on Hannukah, watching the Ten Commandments and doing Seder on Passover, and having reflective discussions after services on Yom Kippur weren’t just things we did, but were part of who we are. I felt more connected to Israel as my homeland, finding out about how my relatives helped build the State and maybe could have been saved from the horrors of the Holocaust with it. I donated Tzedakah (charity) to the Jewish National Fund (JNF) to plant trees in Israel, learned how we helped “make the desert bloom,” had a second Bar-Mitzvah atop Masada, and sang the Hatikah to celebrate our survival despite all odds and return to Eretz Yisrael (the land of Israel) and Yerushalayim Shel Zahav (Jerusalem, the City of Gold).

My Jewish identity was deeply strengthened throughout my years in BBYO, a global Jewish Youth Movement. I loved planning Judaic events, inspiring me to serve as the head of religious programming for my chapter, the D.C. area, and organizing a Global Judaism Shabbat Service at an International Convention. I explored what being Jewish meant to me during a program called “International Kallah” four and a half years ago, during which I developed my belief in G-D, eagerly learned about Israeli history, considered how my Jewish and American identities coincide, and got a Siddur and Yarmulke which I still use today. I discovered that Tikkun Olam (repairing the world), Being a Mensch (good person), and having Ru’ach (spirit) were the values I strove to live by. This connection only expanded as the years went on. Within a week of arriving at Duke, I began immersing myself within the Jewish community. Jewish Student Union, Challah for Hunger, Jewish Learning Fellowship, and Shabbat became not only some of my primary activities, but collectively transformed the Freeman Center into a home for me. It wasn’t because I always felt in my comfort zone; in fact, it was because I was interacting with new people, planning different events, and struggling with deeper questions that made it so special.

How does this all connect with my experience at the Arava Institute? It’s because my Jewish identity has shaped my entire experience here. I struggle because of how Zionism, the pursuit of a Jewish State in our biblical homeland, is constantly challenged and critiqued. I struggle when any of my fellow participants delegitimize the motives of Israel and diminish the threats it faces. I also struggle with experiences that contradict the narrative I’ve grown up with about Israel, such as JNF using trees to enclose Bedouin communities, Palestinians being removed from their homes in 1948, Jordanians not having the ability to visit their holy site of the Al Aqsa Mosque, or my friends here being discriminated against just for being Arab when they leave campus. These action don’t “repair the world,” they tear it apart. 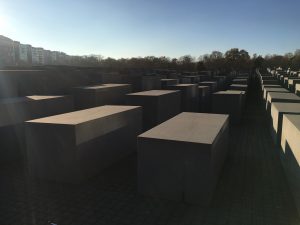 Memorial for the Murdered Jews of Europe

But, how do I interpret these actions in the context of antisemitism which may have led to many of these actions? This past weekend, I visited Berlin, Germany with a couple of friends from the Institute. It was a fascinating city: historically, culturally, and architecturally. Underpinning the entire experience though was remembering the tragedies of the Holocaust. I walked by the museum where Joseph Goebbles led a Nazi rally, saw the Reichstag where the Enabling Act was passed giving Hitler absolute power, and stood above his bunker. The Memorial to the Murdered Jews of Europe had no official explanation; the designer left it up to interpretation. Some saw the stones as a cemetery, others focused on the feeling of being trapped and lost in the middle, while a few perceived the light as you exit as a brighter future. Personally, I was really angry. Six million Jews and five million others were killed in the Holocaust simply because of their identity. But, we haven’t learned even the most basic lesson in the over seventy years since this horrific tragedy ended; accept people for who they are. It’s so freaking simple, yet we see examples every day of this principle being violated. I felt defeated hearing many of the 400 Hamas rockets being fired from Gaza targeting Israeli civilians. I felt upset finding out that the mural painted at Duke commemorating the Pittsburgh synagogue shooting victims was covered with a swastika, the symbol that celebrates my relatives being brutally murdered.

These events have encouraged me to delve further into my Judaism. International Kallah was the last time I really thought about my Jewish identity, but I now have a deep desire to engage further. I want to explore some questions that I’ve taken for granted.

My deep tie to Judaism has also shaped many of the questions I’ve struggled with about Israel.

I probably won’t figure these out during the remainder of my time at the Arava Institute. My answers are likely to keep evolving anyways. But, I greatly appreciated the advice from a friend I visited in Jerusalem: don’t go through the journey alone. I’m hoping to utilize the unique opportunity the Arava Institute provides by diving into these questions with such diverse individuals, and continue doing so when I return to Duke in the Spring and beyond. 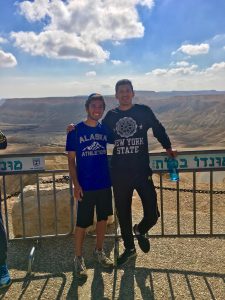 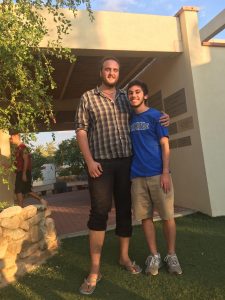 Elliott and Liam at the Arava Institute