Last week, I participated in the Arava Institute’s Peace-Building Leadership Seminar (PLS) trip. While PLS is typically a weekly open-ended dialogue about the conflict, the trip was designed for us to experience the Israeli-Palestinian conflict firsthand. The trip was extremely challenging to say the least: experiencing the impacts of Israel presence in the West Bank, hearing the Palestinian narrative of the history of Jaffa (a port city by Tel Aviv), and examining the impact of Zionism. I did my best to always keep an open mind by listening to each speaker, trying to understand their perspective, and critically analyze everything around me.

We began by heading to Beit Jala, a Palestinian town in the West Bank outside of Bethlehem. On the way, we were joined by two tour guides. One was a settler, a Jewish Israeli living in the West Bank; the other was a Palestinian. When the Palestinian guide spoke, most participants seemed to be very receptive, accepting the information and being very sympathetic to his perspective. I definitely appreciated his knowledge and insight. However, I disagreed that whether or not stone-throwing is a form of violence is a “matter of perspective” because he rarely hit Israeli soldiers. When the settler guide was speaking, most participants were very dismissive. They were angered by his questions of “how can you be occupying your own land” and “how do you differentiate occupying and liberating.” They found his desire for Jews and Palestinians to peacefully coexist in the West Bank to be disingenuous. Unfortunately, as he was relatively new to providing tours, he tended to evade difficult questions rather than engage with them. Nevertheless, he said something I had never heard before: he’d be okay if a two-state solution would result in him becoming a Palestinian citizen. 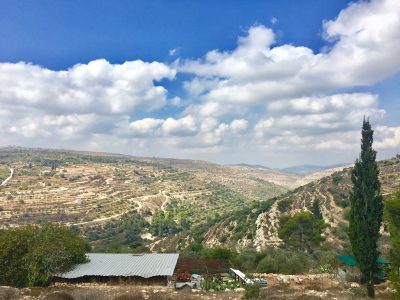 At the Institute, I often find myself isolated in believing that Israeli withdrawal from the West Bank is not a precondition for peace, nor is it the primary barrier to it. I believe that Palestinians have every right to live where they are. But, Jews also have connections to the West Bank, and many have lived there since they were born. The international community prohibits settlements in occupied land and Israel agreed to fully withdraw from the West Bank as part of the Oslo Accords in 1993. While I acknowledge the importance of this, is removing 500,000 people from their homes, especially many of which who feel very connected to the land, really the only way to move forward? Hearing the settler’s statement brings another idea to mind: allowing settlers to stay in their homes deep in the West Bank; not as part of Israel, but as part of a Palestinian state. If residents would prefer to be part of Israel, they could relocate, but they could also choose to remain in their homes and become Palestinian citizens with equal rights under the law. I understand my friends’ concern over the Israeli Civil Administration claiming and expropriating formerly Palestinian land for settlements—this is wrong. But, I disagree that forcibly removing all Jews is the answer; we should strive for peaceful coexistence while acknowledging Palestinians’ right to live freely in their land.

We then traveled to the separation barrier. It was created in the wake of the 2nd Intifada (uprising) to prevent terrorist attacks stemming from people in the West Bank; particularly suicide bombings and bus explosions. Fortunately, terrorist attacks significantly decreased after the construction of the barrier, protecting the safety of Israelis. But, a significant portion was constructed within the West Bank, not on the Green Line border between Israel and the West Bank, and many Palestinians were cut off from their land as a result. I believe the wall was necessary for security, but empathize with Palestinians who struggle as a consequence and believe improvements can be made. I found out during the trip that there are many places at which there are no barriers or checkpoints to cross. It made me wonder then: what caused the decrease in terrorist attacks? 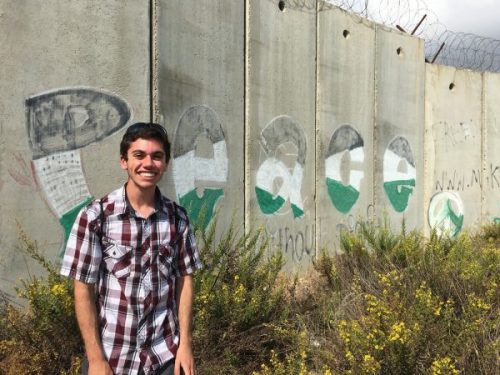 We then went to the Tent of Nations, a Palestinian farm amidst multiple Israeli settlements. The owner spoke about the continuous struggles he has faced, including multiple attempts to buy him out of his property in order to connect the settlements, demolitions of any new structures built, and being restricted from access to water or electricity. Rather than turn to violence, he has advocated for his rights through the Israeli court system. Furthermore, he has used the limitations he faces to his advantage; building solar panels to generate electricity, leveraging underground spaces, and collecting rainwater. I found his resilience truly beautiful, as well as his ideology: “We refuse to be victims, we refuse to hate, we refuse to be enemies, we believe in justice.” I empathized when he said that good neighbors must be treated equally.

Later that night, we went back into Israel proper to a village called Neve Shalom. It is an intentional mixed community composed of Jewish and non-Jewish Arab families. It was inspiring to know how that religion doesn’t need to be a barrier to peace. Just as diversity is an asset at the Arava Institute, it can also be across the region. During a reflection activity, I was really struck when I asked a friend about his thoughts from the day, he said that he struggled with Israeli actions in the West Bank “in the name of my religion.” I’m still trying to process this statement and think about it in terms of the responsibilities I have as a Jew. 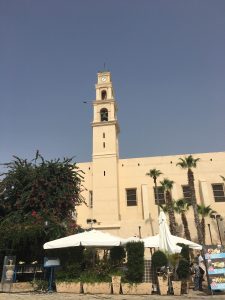 The next morning, we heard from a Palestinian scholar in the town of Jaffa where he shared the city’s history in his view. He spoke about the town as the most populated Arab city in the region with a thriving economy. He said that such a populous area was incompatible with the Zionist vision of a Jewish state, leading to 97% of the population being driven out in the 1948 War, and the remaining people being suppressed, relocated, and forced into coexistence. He argued that Zionism was inherently racist by envisioning a Jewish state in a land with 95% Palestinians. Needless to say, I was really uneasy about this argument. Jews have faced oppression across the globe for centuries, and just as many peoples have created states, Jews have the right to a state in our homeland that we’ve been connected to for thousands of years. Even though the notion of “a land with no people for a people with no land” wasn’t accurate, it doesn’t dismiss the legitimacy or necessity to have a state for the Jewish people. I also really struggled with the idea that what happened in Jaffa was inevitable: had not all of the countries surrounding Israel attacked the Jewish State for declaring its very existence, non-Jewish Arabs could have peacefully remained in Jaffa. Additionally, I thought the speaker’s comments that “Zionists didn’t do the hard work on the land” and that “Zionists taught us about the ghetto” was not only distasteful and inappropriate, but can definitely be seen as anti-semitic. Plenty of people in the conflict are guilty of acting on stereotypes, but it is wrong for an invited educational speaker to succumb to them. I didn’t appreciate how he portrayed Israel as the aggressor in 1948, but the talk did open my eyes to the difficult experiences many Palestinians endured during the Independence War. 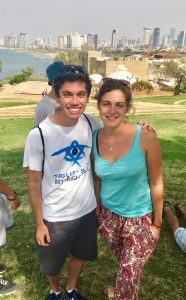 Following the talk, we went on a walking tour of Jaffa and Tel Aviv. I thought it was interesting learning about both places, developing a greater historical understanding of Tel Aviv, a fascinating mix of a quaint beach town and an innovative bustling city. While the tour was designed to provide the “Israeli” narrative, it sought to further complicate the Zionist perspective. For example, he said that the famous photo of Tel Aviv’s founding in 1909 on sand dunes must have been taken from a particular angle to not show the city of Jaffa or surrounding trees.

We concluded the tour at Independence Hall, the building at which the Jewish state was declared. Yet, we didn’t visit the museum or discuss the proud feelings of patriotism the site evokes. In past visits, Independence Hall has reflected why I’m proud to be a Zionist and a Jew. While there were time constraints for the trip, skipping out on this site deprives participants, who mostly heard the “other” perspective on the trip, from understanding the importance and pride of the State of Israel.

Looking back on the experience, I’m left with more questions than answers. I’m thinking about what it means to be a Zionist, what my responsibilities are as it relates to Israel, and how to improve the lives of people affected by the conflict. I’m wondering why the Israeli narrative wasn’t given the same respect that the Palestinian narrative was. I’m trying to figure out the best way to remove the barriers Palestinians face while maintaining the security and stability of Israel. I’m conflicted on what it means for Israel to be a Jewish, democratic state in a place that has had and continues to have a diverse population. I’m struggling how to acknowledge the many flaws of a nation while defending to my peers its legitimacy and the good it does for the Jewish people and the world. I’m hurt by those who perceive my beliefs as naive or unjust, while I’m comforted by those who respect my thoughts and are supporting me in exploring one of the most complicated conflicts in the history of the world to which I’m deeply connected. I’m proud to be genuinely engaging in the journey, and look forward to seeing where it takes me.