Starting my Journey at the Arava Institute 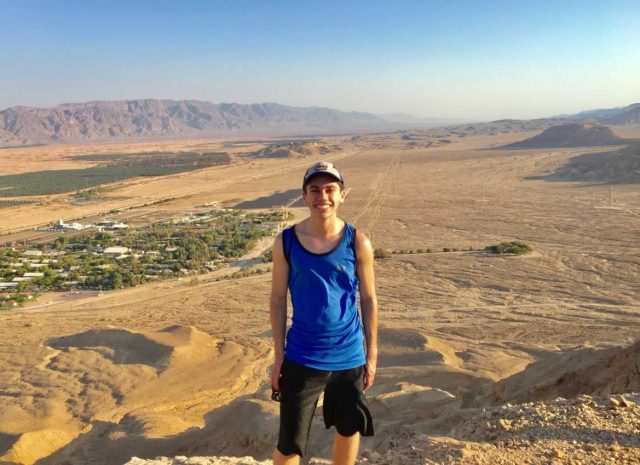 Two weeks ago, I arrived at the Tel Aviv Bus Station to begin my study abroad experience at the Arava Institute for Environmental Studies; an environmental peacemaking program with Israelis, Palestinians, Jordanians, and people across the globe.

Before the program began, I wasn’t nervous; I was just eager. I learned about the program nearly four years ago and have had it on my mind ever since. I began working to get the experience approved by Duke over a year ago, and despite many obstacles that arose, I ultimately succeeded when I got the green light in March. I knew the Institute was focused on much of what I value: the environment, Israel, Judaism, diversity, and community. When people asked me about my goals for the program, I didn’t have a concrete answer, nor did I want to. I wanted to be completely open to exploring these values, having them challenged, and forging strong relationships along the way. As my parents once told me, “it’s not about the destination, it’s about the journey.” With this in mind, I approached the group of students standing in front of the bus station building.

At first, I felt a sense of uneasiness. Besides carrying at least double the luggage of any of my fellow participants, many of those around me either looked older, were standing awkwardly silent, or conversing in different languages. Then, I began speaking with one of the other participants; it turned out she was from North Carolina, enabling a familiar conversation about Duke versus UNC. I began to settle down, recognizing I wasn’t alone as an American. On the bus ride down to Kibbutz Ketura, conversations began by sharing names (which I unfortunately quickly forgot), where we were from, and how we heard about the Institute. As the ride continued, we began discussing topics such as music, food, and traveling. 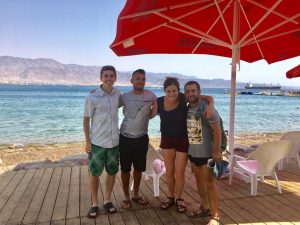 Upon arriving Kibbutz Ketura, I met so many people in a short amount of time. I met my roommate, a fellow Jewish American, and my lounge mates, coming from across the Middle East. The sixty of us participants, including both students and interns, took part in icebreaker sessions and toured the Kibbutz. We also listened to staff members talk about life on campus, what it means to be part of a Kibbutz community, and academic opportunities available to us. Throughout these sessions, I began speaking with other participants who were also trying to process the new information being given to us.

Within a couple days, many of my fellow participants started becoming my friends. We were no longer just talking about where we were from, but sharing who we are, what we like to do, and our thoughts about the Institute thus far. While I was really enjoying these conversations, it was sometimes difficult to overcome the language barrier. When I would speak, people would often ask me to repeat myself or slow down. I know that I tend to talk quickly, but with native English speakers, that was never a barrier to conversation; when people have Hebrew, Arabic, German, French, or Swahili as their first language, that’s no longer the case. I’m still working on this, but just as I’m becoming more able to understand their English, I think they’re becoming more able to understand mine. 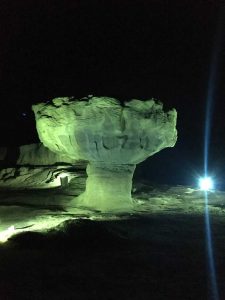 Although the Arava Institute is primarily an academic program, we have only had one or two sessions of each class due to the Jewish holidays of Yom Kippur and Sukkot. I have enjoyed the classes we’ve had thus far. After all, they are environmental classes, and I got to pick the five that I’m most interested in: Environmental Policy, Climate Change, Ecology of the Arava, Environmental Mediation and Conflict Resolution, and Political Ecology. The pace and intensity appears to differ from what I’m used to at Duke, so hopefully this will enable me to engage more deeply with the material and assignments, versus the frequent feeling of merely trying to check things off of a to-do list. I’ve already spent more time than I usually would going through readings about people’s influence on the Amazon Rainforest and approaches and barriers to conflict resolution.

I will soon be beginning the Peace-Building Leadership Seminar, a three-hour weekly, open-ended discussion about the Israeli-Palestinian conflict. While many others are afraid of this experience, worrying about how our beliefs will deeply clash, I’m looking forward to it; even if we fundamentally disagree, it’s not every day that people from Israel, the West Bank, Jordan, the United States, Germany, France, and Kenya come together to discuss the conflict with the goal of understanding one another, not to mention being friends throughout the process. 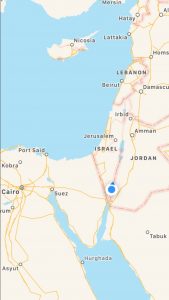 Map of Israel and its neighbors

As classes have yet to pick up, I’ve had the opportunity to leave the Kibbutz a few times. This has included organized nature hikes in the Arava, exploring Eilat, and sleeping out on the beach (where we could see Jordan, Egypt, and Saudi Arabia at the same time) for the start of Sukkot. This weekend, I will be traveling to Tel Aviv and Jerusalem where I plan to meet up with many old friends and explore the cities with my roommate.

Living on a Kibbutz is definitely different than being in North Potomac or Durham. All of us, including the four hundred Kibbutz members, eat each meal during particular hours in the dining hall. There are no laundry machines, only hand-washing or a Kibbutz laundry service. There’s no two-day Amazon Prime shipping, we are over a half hour away from the closest city, and there’s just one road to take us there. We are in the middle of the desert, with only other Kibbutzim, the border with Jordan, and beautiful mountains in sight.

Fortunately, I’m at the Institute with a diverse and friendly group of people who love playing games and sports just like me. We may not agree on politics or how to resolve the conflict, but we share the idea of “Nature Knows No Borders” and the aspiration for a better future. I can’t wait to experience all that the Arava Institute, Kibbutz Ketura, and Israel have to offer, and hopefully contribute to environmental peace in the Middle East.

2 Responses to Starting my Journey at the Arava Institute