My name is Elliott Davis, and I graduated from Duke University in the Class of 2020. I received a Bachelor of Arts in Environmental Science and Policy with a minor in Economics and a certificate in Innovation and Entrepreneurship. I hope to leverage my academic background and professional experiences in the private, public, and non-profit sectors to advance innovative climate, conservation, and sustainability solutions. My career goal is to enact environmental policies on the national and international levels which help people, wildlife, the economy, and the planet.

Originally from North Potomac, Maryland, I was interested in coming to Duke because of its diverse academic programs, beautiful “green” campus, passionate sports culture, and welcoming student body. Throughout my four years, I contributed to various environmental, political, religious, and outreach organizations on campus. 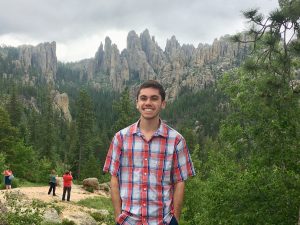 My environmental engagement on campus began as a member of Duke Environmental Alliance, a social environmental community focused on education, outreach, and service. I served as an Officer, Co-President, and President of the organization. During my sophomore year, I lived in the “Smart Home,” a sustainability living and learning community, and worked for UCapture, a climate start-up, as a Climate Action Ambassador. The following fall semester, I participated in a cross-border environmental peacebuilding study abroad program in Israel. After returning to campus, I joined the Raleigh-Durham chapter of Citizens’ Climate Lobby, a bipartisan climate advocacy organization, and launched the Duke team during my senior year. I also contributed to sustainability campaigns including opposing a new campus natural gas plant, supporting a Durham-Chapel Hill Light Rail, and helping the university reach its goal of carbon neutrality by 2024.

Throughout my four years at Duke, I was very involved in the Center for Political Leadership, Innovation, and Service (POLIS). After participating in political speaker events and workshops, I launched a bipartisan dialogue initiative to promote campus discourse about contentious political issues. This entailed organizing and facilitating bi-weekly discussions on topics including free speech, gun control, immigration, and the economy. I was also an active member of the American Grand Strategy program designed to train the next generation of foreign policy and national security leaders. I frequently attended lectures by U.S. Ambassadors, Secretaries of States, White House officials, and military generals.

Jewish Life at Duke was an important part of my college experience. I was a leader in the Jewish Student Union, serving as the Religious Programming Officer. I also attended monthly Challah for Hunger bakes and participated in campus Israel programming. My Friday nights were often spent at the Freeman Center attending Shabbat song sessions, services, and dinner. During my senior year, I was part of an interfaith living and learning community and an interfaith dialogue program.

Experiencing the wonderful Duke community, especially at basketball games as a Cameron Crazie, I wanted to give back to it. I became a tour guide through the Admissions Ambassadors program, showing prospective students and their parents around campus each week. I was a columnist for The Chronicle, the independent campus news organization, publishing articles for my column “The Optimist.”

I’ve also had the opportunity to complete a variety of professional environmental experiences. During the Summer of 2015, I interned for my Congressman John Delaney (MD-06) where I initiated and helped organize a Climate Change Workshop. This event demonstrated the ability for policy to drive change. My passion for sustainability grew interning for the Montgomery County MD Department of Environmental Protection, Environment America, and The Stella Group, a clean energy firm. After my freshman year, I was the Conservation Policy Stanback Intern at the National Wildlife Refuge Association. The following summer, I participated in DukeEngage Portland and interned at Crag Law Center, an environmental law non-profit. After junior year, I interned on John Delaney’s Presidential Campaign focusing on climate policy and communications. I have now returned to UCapture to work as a Business Development Manager, helping organizations, campuses, and events become carbon neutral.

I am fortunate for all of the experiences I’ve had—academic, extracurricular, professional, and social—and am excited for what lays ahead on my journey to help the environment and protect all of its inhabitants.