What is a Ghetto?

The second dialogue from our “What is…” series explores historical, geographical, and cultural representations of the ghetto, ranging from 16th century Venice, through Eastern Europe inter-war period and Nazi Germany, all the way to modern Chicago. By shedding light on countless misconceptions and misrepresentations of communal spaces throughout history, our invited speakers think beyond the commonplaces surrounding ghettos and, collectively, advocate for the need to re-imagine and re-claim their depiction.

Paul Jaskot’s intervention is centered around the spatial qualities of ghettos, which are often overshadowed by the cultural and ideological connotations they carry. As an attempt to re-imagine the specific, urban model of ghettos, he challenges their widely accepted characterization as spaces that are segregated, compulsory, and enclosed by offering a revised model that accounts for exceptions he situates in Nazi Germany, for instance. These three defining terms are transformed into functional processes that allow for a broader, more inclusive representation of ghettos: sorting, as a way of dividing communities without entirely segregating them from all others; policy, as ghettos are not always a result of enforced law, but also of governmental and societal guidelines; spatial, as ghettoization always requires some sort of spatial expression that is active rather than definitive.

Karen Auerbach reframes the initial question of “What is a ghetto?” by focusing on the journey of the term, which underwent notable transformation between the period preceding World War II and that of German-occupied Europe. The use of the word ghetto to signify Jewish suffering reduces its meaning to the horrors of the Holocaust, casting a shadow over inter-war Eastern European Jewish communities among which ghettos provided a place in society and a sense of belonging. An example of this reality can be observed in a series of documentaries about the Jewish population in various cities of Poland, directed by Jewish brothers Saul and Yitzhak Goskind. The narrative offered by the brothers-directors depicts a vibrant, communal life of the ghetto, a word that was used to encompass the collective ethos of Eastern European Jewish culture in 1939.

To conclude, Shaul Bassi provides six possible working definitions for the word ghetto, using Venice as main example. 1) Ghetto as a place of misunderstanding, where the incompatibility of individuals is negotiated, while creating a plethora of misconceptions throughout history; 2) ghetto as a palimpsest, whose opaqueness invites the superimposition of other Jewish or non-Jewish narratives; 3) ghetto as a screen, onto which one can project one’s own feelings, memories, and narratives; 4) ghetto as a performative space, where national celebrations of political and civic identity take place, as well as theatrical performances; 5) ghetto as a creative and educational space, allowing for the creation of temporary communities of scholars, artists, and students; 6) ghetto as a thinking machine, functioning as a space in which educational and performative practices can reactivate ghettos’ cultural capital that has been largely forgotten.

Trieste-Zurich-Paris 1914-1921 is the last line of James Joyce’s Ulysses, and the signature of this experimental novel, published first in France in 1922.   As we mark the centenary of Ulysses, we celebrate its multi-lingual play.

The small pop-up exhibit in the Perkins Circulation area invites you to discover some of Joyce’s works in the collections of the David M. Rubenstein Rare Book and Manuscript Library.

On February 8: an opportunity to discover the pop-up exhibit with colleagues.. Come enjoy something of the sounds of Ulysses’ inventiveness in English, français, italiano, + a song and maps too. The event is planned in person.

(It’s never too late to celebrate a birthday…)

The second event in the “What is…” series of the Global Jewish Modernism Lab. Each dialogue involves the examination of one term and its representation and use in diverse geographical and historical contexts. Each conversation will involve at least two scholars, one from Duke and one from another institution. Our Fall 2021 dialogue was “What is Jewish Modernism?” and our Spring 2022 dialogue is “What is a ghetto?” 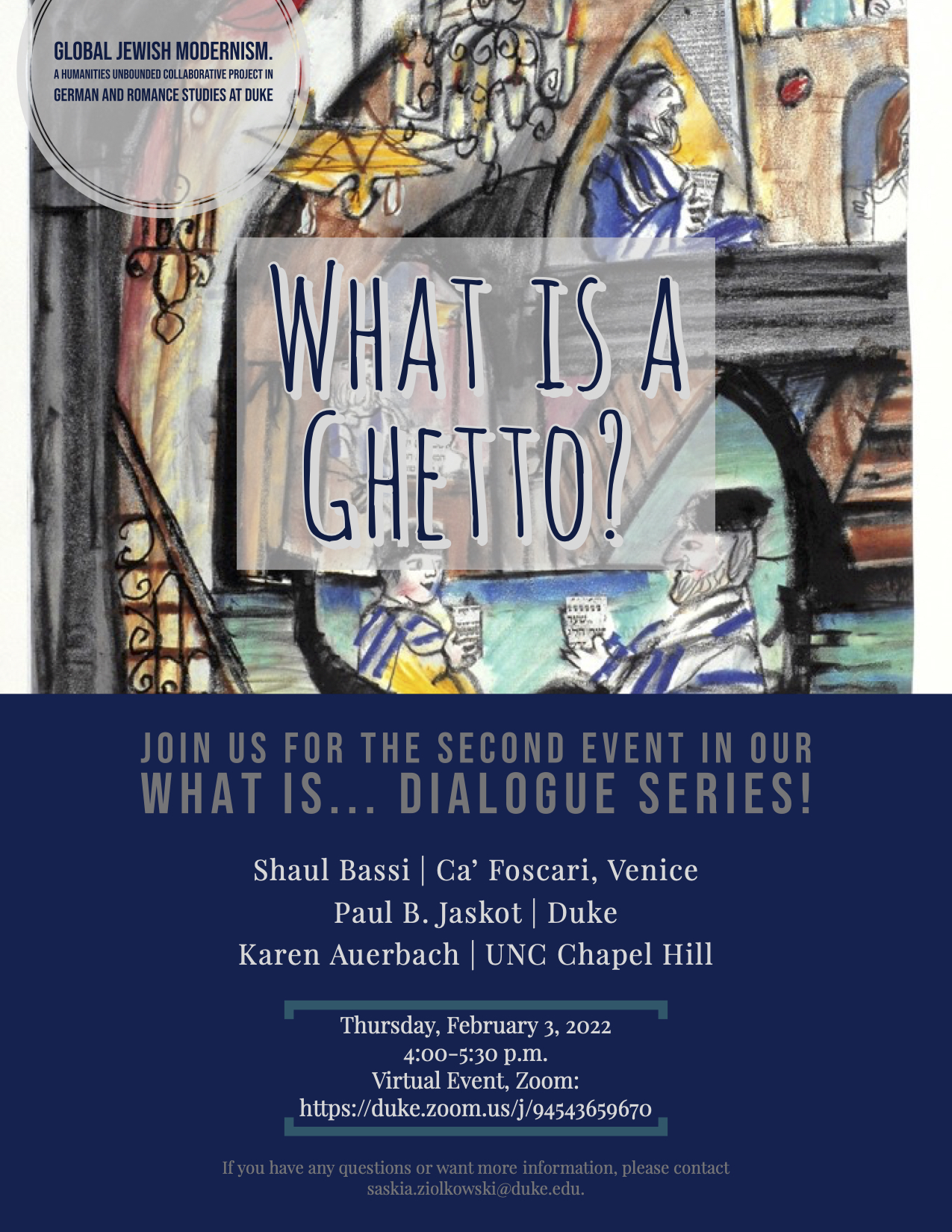