What was mental health like in the 1950s? How is the practice and treatment of mental illnesses different from today?

Psychiatric research in the 1950s had no written rules or laws describing the limits of diagnosis, experimentation, or treatment of mentally ill people. There was no process for consent or an ethics review board as there is today (Platt 20). Psychiatrists performed experiments and suffered no repercussions if something went awry or if the patient died. Many physicians and scientists in general even tested the safety of a new drug on themselves and their assistants before giving it to others (Platt 26). This was usually done with high risks since there were usually no prior clinical studies to establish the drug’s safety. The safety of both the doctors and the patients was not a high priority and lacked the type of control seen in scientific research today, where there is evidence that a scientist’s hypothesis is correct and there is minimal risk to the subject.

In addition to the lack of structure in research and treatments, the public’s view of insane people was not favorable because they were afraid of their unusual, unpredictable behavior. People with mental illnesses were not tolerated in society, and the belief that mental illnesses were genetic in origin generated even more fear. This consequently led to mentally ill people being rejected by their families as well since they didn’t want to be associated with the illness. The most common admissions procedure to asylums became involuntary commitment since the number of intolerable behaviors by the community substantially increased. In fact, by 1939, ninety percent of all admissions to state and county hospitals were involuntary and required only two physicians’ signatures for admission (Platt 18-19). Undesirable behaviors ranged from mania, melancholia, masturbation, poverty, addition, senility, physical defect, and so on. Consequently, patient numbers exploded and filled hospitals that were called bedlams, snake pits, and houses of horror. State hospitals especially had been the primary mental health service available to mentally ill people since the beginning of the 1900s. Despite such increases in numbers, the hospitals and mental institution overall was responsible for keeping them under control without being able to limit the size or composition of their patient population. With the fourfold increase in the number of asylums from 1900 into the 1950s, these patients were available in large numbers and rejected by society, which made it easy to use them for experiments.

Walter Freeman (a psychiatrist and neurologist, but not a surgeon) performed several lobotomy surgeries on his patients that were not legally challenged for many years. He believed that severing some of the neural connections in the frontal lobe of the brain would help relieve the symptoms of psychosis. His personal assessment evaluated the result of the surgeries and stated that the patients “improved” sufficiently. This was enough to resume performing the surgeries on many more patients without improving or examining his methodology and results scientifically (Platt 20-1). This was a large result of the lack of reliable research tools available in psychiatry to measure anything in the 1950s.

Like Freeman, many other scientists did not systematically examine their methods prior to using them. For instance, both electroconvulsive shock therapy (ETC) and insulin shock therapy were used routinely for schizophrenia symptoms. Insulin shock therapy was a dangerous procedure (with an estimated mortality rate of 1 in 100 patients) where small doses of insulin were administered to schizophrenic patients in order to induce a coma and then glucose was administered to bring the patient out of the coma (Platt 13-15). However, improvements in hallucinations and agitation resulting from the procedure were temporary, so it had to be repeated various times. While ETC wasn’t as dangerous as insulin shock therapy, it was not any more effective and still required multiple treatments per week for chronic patients. Overall, patients were not treated ethically and psychiatrists had complete freedom to do what they wanted in terms of procedures and treatments.

Additionally, there wasn’t a system of nomenclature until 1935 when the Standard Classified Nomenclature of Disease was published. By 1952, the Diagnostic Statistical Manual of Mental Disorders (DSM-1) was published by the American Psychiatric Association (APA) and was heavily influenced by psychoanalysts (Platt 29). This bias in the manual’s views and writings persisted through the fifties and sixties. Until the 1970s, there were no operational definitions of a psychiatric diagnosis. Consequently, many psychiatrists disagreed about patients’ diagnoses since their observations according to those definitions weren’t reliable, which accordingly made treatment difficult. Even when a diagnosis was made, treatments during this time period ranged from useless to lethal, and too many were poorly understood or not previously tested. Consequently, with no viable treatment options, the hospital discharged few patients even as their numbers grew beyond the staff’s limit. While a few of the available treatments alleviated symptoms for a short time, people couldn’t even begin dreaming of the possibility of using psychotropic drugs for treatment. During this time, there was much room for improvement in the conditions and treatments for mentally ill patients and these changes were needed quickly.

This was the time and setting that Kline lived and worked in. When he started his job at Rockland State Hospital and Research Center in New York, he knew that access to a large number of patients would be ideal so that his research could have an impact. He was dedicated to the concept of biological psychiatry and had the opportunity to make a large impact without strict regulations limiting his ideas during a period that drastically needed improvements. He lived in the place and time period where his ideas and efforts could succeed.

“Who can enter this no man’s land of insanity and end the suffering?” (Platt 19)
Nathan Schellenberg Kline was convinced he was the one who could do it. 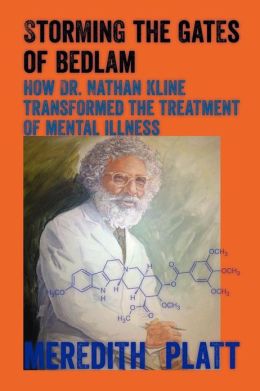 16 thoughts on “Background on Mental Health”