THE SPIDER AND THE FLY

Spiders usually wait for flies to come to their webs, but this spider is impatient and the fly doesn’t seem to be moving for now. So, the spider decides to try to crawl over to the fly. But it needs to do it as fast as possible so the fly doesn’t move before it gets there! What’s the shortest path the spider can take to get to the fly?

HINT: Making a 3D model of this really helps! 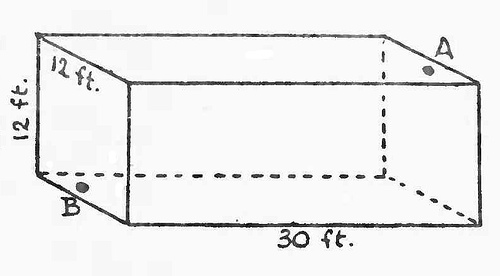 Get to know us! Each newsletter will feature one of our mentors, all of whom are women in STEM. This week, we have Selena!

Selena is a junior with an interdepartmental major in Visual & Media Studies and Computer Science here at Duke. She joined the GEM team because she places a lot of value on education and opportunity and believes it’s important for girls and women to have the chance to see themselves succeed in historically male-dominated fields. She really enjoys the kinds of puzzles that the GEMs tackle every week and the program is a way for her to encourage young girls to pursue or to develop interests in math and science. She hopes to communicate that math isn’t scary and that there’s a lot of different areas where math can be applied for cool and interesting results! For example, she’s taking a computer vision class that’s math-heavy but uses it for applications like object and facial recognition. Selena sometimes feels odd calling herself a woman in STEM because she feels like what she does and is interested in isn’t what people first think of when they hear “STEM,” since she enjoys combining visual arts and graphic design with technology. A fun fact about Selena is that she plays ultimate frisbee!

ASK YOUR DAUGHTER ABOUT

…The differences between biological and culturally-produced characteristics that contribute to the gender gap in STEM!

Last week, the GEMs participated in an activity to learn about the current representation of women in STEM. As a follow up, this week’s activity centered around explaining the current gender gap. During the first part of this activity, the GEMs were each assigned a country. The mentors then asked questions such as “Tea or coffee,” “Average male is taller than average female,” and “boys or girls do better on standardized math tests” for the GEMs to guess based on their country. The groups then debriefed through each question and whether the results or preferences were as a result of culture or biological factors. The goal for this activity was to communicate that girls and boys are not born with differences in STEM ability; the gender STEM gap cannot be explained by biological differences. Below are some questions that the groups discussed after the activity:

Do you think there are other differences between men and women in the US that we think are natural/innate but actually aren’t?

How would you respond to someone you meet who says “oh the reason that there aren’t as many women in STEM as there are men is because boys are just naturally better at math/science?

ARTICLE OF THE WEEK

This week the GEMs learned that the gender gap in STEM varies from country to country, which shows that there is no biological difference in STEM ability between boys and girls. Within the cultural factors that shape STEM education and representation, language is often less thought about than say, the math education curriculum across countries or the attitudes towards women in STEM. It turns out that the ways that different countries communicate numbers may also play a role in the way that children learn math, starting with their ability to count. Read the article below by BBC to learn about the role of language as a cultural factor:

Sam and Kirby were out in their rowboat one day, when Kirby spied a nearby water lily. Knowing that Sam liked a mathematical challenge, Kirby announced that, with the help of the plant, it was possible to calculate the depth of the water under the boat. While Sam held the top of the plant, which remained rooted to the lake bottom during the entire process, Kirby gently rowed the boat five feet. This forced Sam’s hand to the water surface. When pulled taut, the top of the plant was originally 10 inches above the water surface. What is the depth of the water under the boat?

Can she determine which bottle is the poisoned one?

After years of war, the world’s kingdoms have come to an agreement. Every five years, teams representing the elves, goblins, and treefolk will compete in a grand tournament of dragon jousting. You have the important job of recording the scores for the inaugural tournament. But, you overslept and the games are already underway. Can you figure out the real score of each match?

Here’s what information you have: