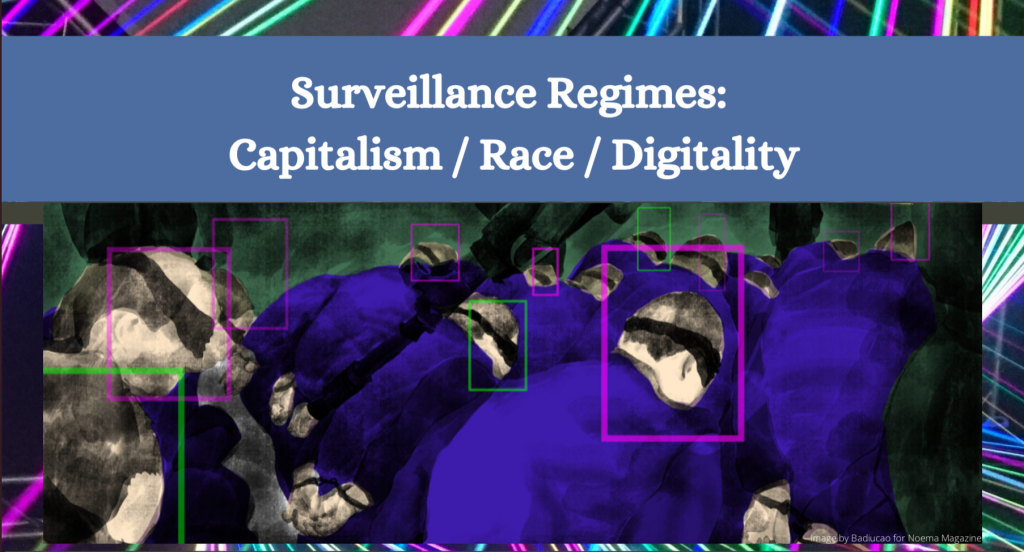 Our speakers for this Ethnography Workshop grapple with the following questions, adding nuance and complexity to current debates about the logics and practices of surveillance capitalism. How do we understand the relationship between cybernetic capitalism and racial capitalism? How are states working with tech firms to maintain racial hierarchies in citizenries and labor markets? How does digital enclosure of Uyghur and Kazakh societies in Northwest China produce a form of original accumulation or capitalist frontier making? How do digital enclosures convert targeted populations into data while at the same time expropriating their labor and produce an underclass of dependent laborers? And how are electronic bracelets, from the US-Mexico border to Europe tracking migrants and creating borders without fences and confinement without walls?

Brian Jefferson is Associate Professor of Geography and Geographic Information Science at the University of Illinois Urbana-Champaign. Author of Digitize and Punish: Racial Criminalization in the Digital Age. My work explores intersections of digital technology, the state, and capitalism. My recent publications look at political geographies and economies of digital carceral technology in New York City and Chicago.

Darren Byler is a postdoctoral fellow at the Center for Asian Studies at the University of Colorado, Boulder. He researches the dispossession of ethno-racial Muslim minorities through forms of surveillance and digital capitalism in China and Southeast Asia. His first book Terror Capitalism: Uyghur Dispossession and Masculinity in a Chinese City (Duke University Press, January 2021) examines emerging forms of ethno-racialization, capitalism and state power in the Uyghur region in Chinese Central Asia. His second book Technologies of Reeducation considers the social life of surveillance technologies among ethno-racial minorities in China and around the world.

Presentation Topic: “The Digital Enclosure of Turkic Muslims in Northwest China.” This talk analyzes the way the digital enclosure of Uyghur and Kazakh societies in Northwest China produces a form of original accumulation or capitalist frontier making. It argues that digital enclosures can convert the sociality of targeted populations into data while at the same time expropriating their labor – producing an underclass of dependent laborers.

Carolina Sanchez Boe is a sociologist and anthropologist. She is currently a Danish Research Foundation post-doctoral fellow at IMC, Aarhus University, at Université de Paris, Cerlis, CNRS, and at SADR, John Jay Center for Criminal Justice, CUNY. Her research project “Borders Without Fences, Confinement Without Walls” focuses on the use of electronic monitoring for border control purposes. Her broader research interests center on the anthropology of confinement, deportation, illegalization, and bordering practices in prisons and urban spaces, primarily in France and the USA. She has worked for non-profit organizations in these fields, including Cimade, American Friends’ Service Committee, Cette France-là, and the Prison Litigation Network. Her book, The Undeported (due 2021) is forthcoming with Rowman and Littlefield.

Presentation Topic: “Studying Digital Confinement and Internal Border Surveillance in the Time of Covid.” After working on the entanglements of criminal justice and immigration control in France and the USA for the past two decades, with a focus on the experiences of foreign-nationals in prisons, detention centers, and facing de-legalized or undocumented status in the Greater Paris and New York areas, I turned towards studying the use of electronic monitoring as an alternative to immigration detention in the USA. My project “Borders Without Fences and Confinement Without Walls: New Approaches to Migration Control Through Electronic Bracelets” a project that studies 1) the for-profit and humanitarian motives behind the use of electronic surveillance for internal border control as well as 2) the ways in which these new technologies of confinement experienced and embodied, when border control is ensured in the most intimate spheres, in homes, and on bodies. In my 15 minute presentation, I wish to discuss the use of audiovisual methods to study digital confinement and surveillance and the specific problems encountered now that contacts to my research participants are reduced to communications through their cell phones, which are also the device through which they are being monitored by ICE.