We are always interested in new projects. Email anjali.arora@duke.edu with ideas, suggestions or questions.

Stay tuned for project updates for the upcoming academic year! Given the current pandemic, this year, we are looking to focus on projects that will be more easily accessible virtually.

The infant audiometer team worked on writing Python code to obtain readings from oscilloscopes and also worked on making the sampling rate high enough to achieve accurate readings. They also worked on the circuitry for the EEG. Lastly, they worked on designing logic using statistics to analyze input data.

The EWH Executive Board began working with a similar organization at Harvard, called GAMI, to ascertain the most significant medical device needs and start projects based on these needs.

The infant audiometer team worked on ascertaining the simplest way for a user to interact with this device, and developed both Python code and circuitry connecting to the raspberry pi around this.

This year the patient monitor team has developed a prototype of the pulse oximeter module. We’re currently working on getting an actual signal and may design our circuit. We have two finger clamp designs put together and hope to finish a prototype this year

We refined and optimized the EEG recording procedure. We designed an FFT based algorithm for analyzing EEG data using python. We also started using a raspberry pi for recording and analyzing EEG.

In the summer of 2015, a team from the Duke chapter of EWH helping to repair medical equipment at the Hospital Regional de Occidente in Guatemala noticed a deficiency of adequate surgical lighting in the operating rooms (ORs). This is representative of a greater issue that in developing countries, government hospitals are frequently low in funding and may not be able to address insufficient lighting. In the Guatemalan hospital, each room consistently had only one working surgical light head and the team found that the personnel there either did not have enough knowledge or enough resources to fix it. In contrast to the advanced LED surgical lights used in developed countries such as the US, government hospitals in nations like Guatemala use obsolete models with incandescent bulbs. The Steris SQ240, one of the commonly used models, uses a tungsten halogen bulb. Since Steris no longer supports this specific model, the OR lighting can only be improved by replacing the entire light fixture or continually buying new parts. The former option is not viable for government hospitals due to cost constraints and the latter is hindered by limits of the staff’s technical knowledge. However, if the parts used in the existing light models were simplified, the lighting issue could be combated.

We designed an LED-compatible light bulb socket compatible with the SQ240 surgical light fixture used in Guatemala. Past efforts to build LED surgical light replacements have resulted in prototypes that do not make use of the existing light fixtures. These designs can be difficult to implement in low resource areas due to lack of personnel and knowledge. Our design would provide as much power and lighting as the current models, adapt to commonly available bulbs in the region it is used, be easy to use, and last longer than the current lights in use. The kit utilizes automotive LEDs that are used regularly in the developing world. The light bulb socket was designed in Solidworks and light intensity is controlled with a 555 timer circuit. We are currently improving the prototype with the goal of eventually testing the product in Guatemala and potentially expanding compatibility with other surgical light models.

This design project aimed to address issues in the diagnosis on pneumonia in the developing world. In the diagnosis of pneumonia, especially for children, one of the metrics is to count the number of breaths a patient takes in a 30 or 60 second timeframe, which is an indication of pneumonia for especially high numbers. However, in the developing world with few pieces of medical equipment, health workers often must visually count the number of breaths a patient takes, sometimes with a timer. This manual method of counting tends to be fairly inaccurate, and leads to many false positives and negatives.

The goal of our device was to create a low-cost, automated solution for measuring respiration rate, which could provide a more accurate count of breaths. This was accomplished by utilizing an elastic belt with a strain sensor inside that registered chest movement associated with breathing. The signal was amplified and filtered, and finally displayed on an LCD screen using an Arduino microcontroller based system. 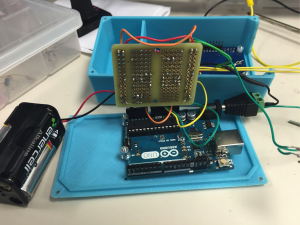 During the past few decades, the prevalence of Type 2 Diabetes has almost tripled in developing nations. One of the earliest signs of diabetes is plantar neuropathy, which is diseased or dysfunctional nerves that lead to numbness or tingling in the foot. Neuropathy is also an indicator of alcoholism, infections, autoimmune diseases, toxic exposure, trauma, and vitamin deficiencies. Thus, plantar neuropathy is useful for diagnosing any of these ailments. In addition to diagnosis, a device which can quantitatively monitor patients’ neuropathy over time is useful as a continuous monitor of how well he/she is being treated in addition to an early indicator of issues to come. Unfortunately, there is no sufficient method of detecting and quantifying plantar neuropathy in developing nations. The current method, monofilaments, are unable to provide a quantitative measure of the severity of neuropathy at each location in the foot and the devices are meant to be disposable. Unable to afford or obtain enough instruments, physicians in developing nations reuse the monofilaments, and their proficiency in diagnosis declines with time.

We designed a reusable system that diagnoses plantar neuropathy with at least the same proficiency and greater accuracy than the monofilament system, and which mimics the biothesiometer in function but not price. Vibration has been shown to be a more effective method of diagnosing plantar neuropathy, so our design utilizes DC vibration motors powered by pulse-width-modulated currents in order to perform with the desired specifications, producing vibrations with consistent frequencies and varying in amplitude. It is an Arduino-based device that utilizes an Arduino Uno, an Arduino Motor Shield, and a micro-DC vibrating motor. The vibration of the motor is measured by a piezoelectric attached to the side of the motor. The Arduino code also allows the user to easily change the pulse width modulation and the voltage applied to the motor in order to implement the various strengths necessary for an accurate diagnostic test. 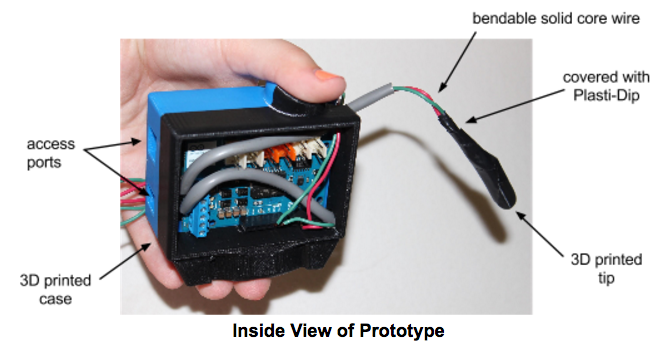 Patient-nurse communication forms the foundation of hospital workflow. The faster patients can indicate their status to the staff nurses, the faster they will receive proper care, and the more efficiently the hospital can operate. In the United States, studies have reported that over 70-80% of inadvertent patient harm or health care errors were a result of communication failure or poor communication (JCAHO, 2008; Schaefer, 1994). In the developing world where technology is less advanced and hospitals are often understaffed, the negative effects of poor communication are exacerbated.

The Patient-Nurse Paging System (PNPS) is an inexpensive, patient-bedside communication system. After consulting with the doctors and biomedical technicians in Kibosho Hospital in Tanzania, members of EWH Summer Institute realized a need for a communication system between patients in the general ward and nurses in the nursing station. Unlike many of the general wards in developed countries, the nursing station is not always located in the center of the wards. Patients and nurses are separated into different rooms, and the low number of nurses compared to high number of patients compounds the problem of communication between the two parties. In the Kibosho Hospital, a prototype of the PNPS was implemented using simple parts: relays, a bike light, an alarm (recovered from an oxygen concentrator), and wires. With the PNPS prototype, nurses could better respond to emergencies and patients needs from the nursing station that was now capable of overseeing five separate female wards. Many of the other hospitals in Tanzania – Mt. Meru, Huruma, Machame, Marangu, Nkoaranga, Selian, and Tengeru – had no such communication systems in place. The situation was very similar in India, where most government-run hospitals, including Ayurvedic Hospitals, lacked any sort of communication tool. Although Western-style hospitals have communication systems in ICUs, they are not being used properly and are expensive to install.

Our solution offers low-cost and simple functions that are vital in the hospitals of developing countries. The PNPS is designed for patients to easily signal for a nurse’s assistance. It requires DC power source and uses an adapter to convert from any original AC input. The system includes an alarm with sufficient intensity to ensure the alarm is audible in the human hearing frequency range. A simple button press triggers an alarm and an accompanying indicator light, after which the nurse would arrive and reset the system with another button press. The circuit design incorporates a normally-open switch to activate the alarm and indicator light and another normally-closed switch for resetting the system. The relay and reset switch allow for smooth deactivation and activation of the PNPS.