The Role of the COP in Climate Action 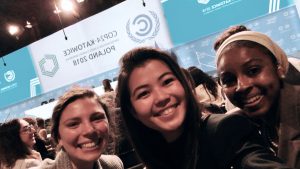 As I write my final blog post on COP24 in a café in Kraków, I am stunned by the amount of both direct and indirect information I’ve learned in just five days of attending COP24 in Katowice. The Conference of the Parties, COP, is a fascinating combination of international political negotiations on mobilization of climate action, a showcase of culture, and theatrical performance.

The main purpose of the COP is the negotiations themselves, and what most people think of when they think of these UN Climate Change conferences. This year’s COP was arguably the most important COP since Paris three years ago. After speaking to many delegates, I have gathered that movement within the international negotiations is not only slow, but seems to be slowing down further. The call for climate action has been consistently ringing, and while everyone agrees the call needs to be picked up, no one has. While it is in everyone’s interest to divest from coal and transition to more renewable sources of fuel and energy, developing countries less affected by climate change are unwilling to reduce coal consumption. While developed countries like Sweden are able to sing their songs of success, developing countries argue they should be allowed the room and freedom to develop (read: emit). To complicate the situation further, least developed countries have already begun to observe the detrimental effects of climate change: higher intensity and frequency of natural disasters, and extreme climate conditions. Of course, a mention of the negotiations must include the developed countries unwilling to go cold turkey on their coal and fossil fuel problem, like Australia, the US, and Saudi Arabia. 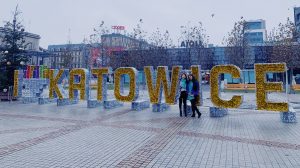 The COP presidency is also a critical part of the conference, setting the tone and acts as an inspirational figure calling for climate action. This year’s COP president, Michał Kurtya, placed emphasis on a Just Transition (to ensure the transition away from coal doesn’t displace workers), and Intergenerational Equity. These two themes permeated throughout the COP this year, Just Transition making more of an appearance formally in parties’ documents and speeches, while Intergenerational Equity was more indirectly emphasized through children presenting and speaking at the COP. While this was the case, during the UN’s Secretary General António Gueterres’ Meeting with Observer Organizations, YOUNGO (youth constituency) noted they felt their voices unheard. While COP24 echoed the need for increased ambition in climate action, and called for the parties to be as ambitious as possible, Poland has won not only Fossil of the Day, but also Colossal Fossil (aka. Fossil of the Year). As I reflect on week 2 of the COP, I can’t help but wonder how parties may have been dissuaded from ambition and finalizing a comprehensive Paris Rulebook because they didn’t observe sufficient ambition from Poland, the host country of this year’s COP. To further grey Poland’s position on climate action, the Poland Pavilion featured daily samples of venison jerky, coal jewelry, and quite frequently coal workers in traditional uniform handing out pro-coal candy. 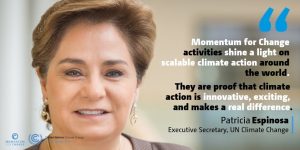 While that is all occurring at the COP, subnational (aka. non-party stakeholders) actors such as cities, regions, businesses, and NGOs, host a plethora of side events. I believe that beyond the formal negotiations, much of the value-add to the necessity of an annual COP is to inspire through a grand showcasing of climate action, an exchange of cultures, but most importantly the exchange of ideas through conversation. In the short five days I was in attendance at COP24 this year, I had the opportunity to talk to delegates from France, Dominican Republic, United States, and Angola, industry individuals who like myself are interested in increasing Public-Private Partnerships (PPP) from all around the world, and individuals from renowned environmental NGOs like the Nature Conservancy. Nowhere else in the world are you able to spark up conversation with someone waiting in line for coffee and find out they work for an organization you’ve only read about and dreamt of working for. Nowhere else in the world will you find so many climate leaders and advocates in the same space, sharing ideas, and working towards tangible climate action.

I am filled with eagerness to act and increase climate action, while the COP was inspiring, it is the translation of everything discussed at the conference to action at home that is most important. Thank you to COP24, Patricia Espinosa, and António Gueterres. Thank you to Michał Kurtya and the city of Katowice for your warm welcome. Thank you to Galen Hiltbrand, Tasfia Nayem, Jonathan Weiner, and Billy Pizer for a great semester, and making my dreams of attending a COP a reality. Let’s get to work.