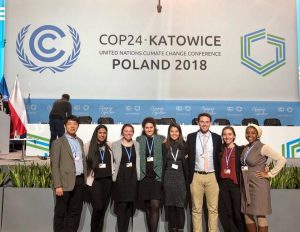 Today was a day mostly about coal for me at the COP. I attended four coal events with NRDC, and learned a lot about the climate, health, economic, and social arguments against burning coal. Most interesting was the presentation in the Great Britain pavilion by the Carbon Tracker Initiative. They have worked for years to gather data on every coal plant in the world and have determined that its profitability is declining rapidly over time, it’s struggling to compete with renewables, and that investing in it includes a large risk of negative stranded assets. I believe that the other arguments—including the moral imperative—against coal are strong, but the economic one is the icing on the cake. Many people arguing against climate change action do so for economic reasons, so this is the perfect counterargument. 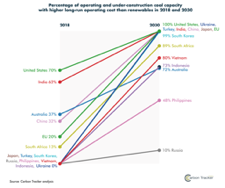 As long as coal is phased out with a just transition for the workers losing their jobs (see my 12.10 blog update), it is a win-win. The first step in reaching the inflection points where coal becomes economically unviable is to stop investing in new plants, which is a challenge in markets where coal receives strong protection. Today’s events gave me hope that we will soon live in a world without coal. As Canadian Minister of the Environment and Climate Change Catherin McKenna said, “We didn’t get out of the stone age because we ran out of stones, but because we got smarter.” 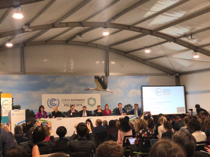 The COP is more than just high-level meetings and party delegates negotiating the terms of international climate agreements. While party delegates are busy, COP participants hop between multiple events hosted by organizations, country representatives, researchers, and other stakeholders in the climate change negotiation process. Today, I spent most of my day attending events organized by country representatives. The country pavilions provide a great learning opportunity to learn more about real and practical actions and initiatives that countries, development banks, NGOs, and more are taking to tackle the large issues posed by climate change. There are a diversity of topics ranging from climate finance, gender mainstreaming, loss and damage, ocean and coastal protection, and civilization and cultural preservation. One of the talks I attended today was hosted by the German pavilion and spoke to the issue of loss and damage at the Negotiations. I have not followed the topic a lot and this was a great learning opportunity for me. The speakers were from the German government, civil society, and academic institutions. I learned about the complexity of the issue especially as it relates to liability and insurance.

Loss and damage concerns compensation for nations that are hit by large, climate events by nations who are responsible for climate change. It has been a sensitive topic at the COP because large, polluting nations do not want to officially declare that climate change is causing specific weather events in different nations and do not want to take responsibility for causing climate change. However, for many small, less developed economies that are most vulnerable to climate change, the burden of paying for insurance and rebuilding their nations after climate disasters is not fair. The language and financial mechanisms around loss and damage is under heavy dispute at the COP. This event was a good introduction to the issue as it addressed the complexities and nuances of loss and damage in the Paris Agreement. 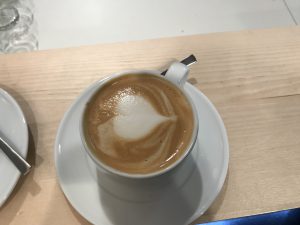 For the 15+ days of each COP, tens of thousands of individuals from all around the world coalesce in one city to agree on how the world will govern itself in order to avoid tragic environmental degradation.  Politicians, CEOs, lawyers, scientists, indigenous representatives, children, heads of state, academics, engineers…the list goes on.

As a student whose academic realm is poised at the overlap between several different fields, the COP is an exciting place to be.  My current studies and past experiences cover law, science, geography, development, environmental justice, and affordable housing.  I’ve had the great fortune to hear speakers discuss each of these topics throughout the COP.  In fact, I’ve often heard speakers bring up several of these topics together within the same conversations.

For example, earlier today, I attend an Indonesia side event that discussed the resiliency of its mangrove forests and the importance of these mangroves for carbon sequestration.  I’ve been able to study the value of mangroves for coastal resilience, for biodiversity, and for carbon uptake.  As such, it was fascinating to hear about how these science-based concepts are being incorporated into policy and economic arguments.

Also today, I attended an event at the Germany pavilion on loss and damage.  Again, the speakers brought up issues relating to environmental justice, a topic I’ve researched at length.  They talked about the geographic underpinnings of countries who emit greenhouse gasses most heavily versus countries who are most impacted by climate change—again, something I spent most of my undergrad studying—before transitioning again into policy analysis.

Today has been one of my favorites at the COP. It has been my most spontaneous day (not a word I usually identify with) and it’s been really fun to just stumble upon some wonderful 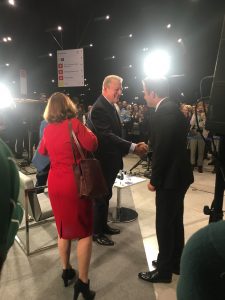 events. The first event I attended was sponsored by the German Pavilion and featured a discussion on loss and damage. In this discussion, issues such as finance and valuation of noneconomic losses were covered by a wonderful panel. I also attended a second event at the German Pavilion on behalf of Climate Analytics (the NGO I have been working with throughout the week) which discussed Germany’s Coal Commission and climate migrants. After leaving this event I stopped off at the bathroom and when I walked back out I immediately heard a familiar voice: Al Gore. Gore was giving an interview in the middle of the venue and I was able to get very close and listen to his statements on empowering youth. I capped off my day by attending the COP and CMP closing plenaries, which lacked excitement, but did allow me to witness the moment the text is officially agreed upon by all parties.

Today, the WWF pavilion, previously the #WeAreStillIn pavilion, hosted an event on showing the state of climate action in Hong Kong. I was interested in seeing how subnational action in a special administrative region that very much lives in the grey area between part of China and full autonomy would fare in increasing climate action (also, I’m from Hong Kong, so it’s definitely close to heart). City-level climate action is important as most of the world’s population currently lives in cities. Evaluation of city-level climate action is difficult in similar ways to evaluation of national climate action, even more difficult in other respects. Semi-autonomous regions like Hong Kong are given the flexibility of its own government, finance, and policies so it allows for more streamlined mobility given sufficient political will. However, because it is a semi-autonomous region and not fully autonomous, Hong Kong is still subject some Chinese policies and contribute to Chinese NDCs. Despite HK’s high potential for climate action, they are severely lacking in their emissions reductions. As an international port city and financial hub, HK falls into the high 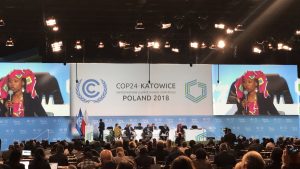 emissions, high GDP category. This lack of climate action, despite pollution being a visible problem, is likely due to the absence of a strong top-level leadership to drive and coordinate climate action and decarbonization of the building and transport sector (which take up 86% of HK’s emissions, without inclusion of the emissions associated with aviation and food production emissions). Sharing of best practices between parties, cities, regions, and organizations is key to tracking climate progress towards net zero carbon emissions and decarbonization of the energy sector.

Whenever I engage in discussions about Climate Change, certain buzzwords always pop up. The most common of them all is Capacity Building. As the COP nears it’s close, its the second last day and all countries are talking about education as a means of capacity building. I spent the Education Day at India, UNFCCC, IPCC, Indonesia and Fiji Pavilions. I got to be a part of discussions that we miss out on daily life, ‘how are organizations building capacity and raising awareness in the most impressionable minds of school going children and how they are reaching the remote areas of developing countries through various programs’. The talks involved not only government led initiatives but also impact-oriented corporate social responsibility initiatives. It was a depressing evening seeing the host country, Poland win the Colossal Fossil of the year award as they seemed to have disappointed many with their coal run economy.

The day ended with a happy, hearty meal with the Duke team and a second dinner with the UNFCCC Recourse Mobilization and Partnerships’ team with whom I volunteered over the past week.

Cooperation and mutual learning are important.

Today, I visited to the Korean Pavilion for the session “KOICA* Project: Strengthening the capacity to address climate change on forestry sector in Ethiopia”. I was happy to see my organization’s project in COP24. As a governmental aid agency, KOICA has supported the project, and Korea University has been implementing it. Korea University has cooperated with Ethiopian Hawassa University to disseminate knowledge to manage forestry resources. The main expected outcomes are improvement of university curriculum and teaching materials, establishment of a management system of laboratory for forest ecology, and strengthening the government officials’ capacity. One of the activities of this project is hosting this side event in the COP24 – to share their experiences. Of course, this makes me proud, but one of the main benefits is that the Ethiopian participants in this project are able to both share and learn from the international community during the COP. For the last days, I have realized the COP is important not only for negotiations among governments but also for knowledge sharing with different stakeholders such as universities, corporations, international organizations, and NGOs. 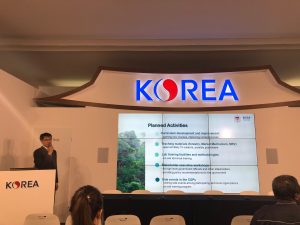