Rian Johnson returns to his mid-budget home to deliver a murder mystery that is deeper than it seems. 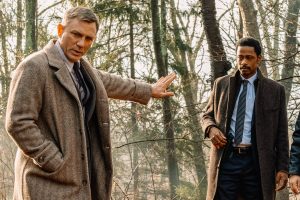 A good mystery always has the following elements: an observant protagonist, a cunning antagonist, a hidden suspect who could be anyone, continuously surfacing evidence, and a shocking but believable plot twist in the end. The film should allow audiences to follow its train-of-thought, leading them to a theory that seems to make sense, only to later tell them an alternate theory is true. If Knives Out’s director Rian Johnson proved anything with his last outing, Star Wars: The Last Jedi (2017), it is that he knows how to subvert the audience’s expectations — for better or worse — and his return to non-blockbuster filmmaking has confirmed that once again.

Inspired by Agatha Christie’s detective novels, namely Murder on the Orient Express, Knives Out follows detective Benoit Blanc (Daniel Craig) as he investigates the murder of crime novelist Harlan Thrombey (Christopher Plummer), suspecting that everyone in his family could be the perpetrator. Knives Out tells its tale of murder and deception from different characters’ perspectives like putting together a jigsaw puzzle, and only when we can see the full picture will the search for truth be fully realized.

Surprisingly, the constant shift of perspective from one character to the next does not interfere with the film’s overall coherence. Instead, it counterintuitively makes the film more fluid and clear-cut. Unlike many Hollywood films nowadays, Knives Out wastes no time on unnecessary characters, dialogue, or subplots. Every element truly has a purpose for the overall story. Even if it does not have the most convoluted method of crime for the genre when the cream finally rises to the top, the film’s exceptionally brisk pacing gives its audience excitement at every turn as we unearth bits and pieces of infinitesimally small evidence.

The biggest draw for Knives Out is its ensemble cast comprised of some of Hollywood’s finest actors, including Craig, Chris Evans, and Jamie Lee Curtis. Craig shifts from the British gentleman spy James Bond to Blanc, an unkempt but witty detective. Evans’ character Ransom Drysdale is arguably the highlight of the film because of how different he is compared to Evans’ most well-known role — Captain America. Evans was funny and unforgettable, and his performance proves that the best is still yet to come in the wake of his Avengers stint coming to an end.

Unlike other mystery films, Knives Out deftly makes subtle, yet effective political comments, and generates discussions on human nature without detracting from the mystery on the surface. The film delves into issues about American politics — such as immigration — and critiques the rising xenophobia in the current American political environment. It also discusses human nature as it displays how family members can turn on each other for self-interest. The movie utilizes irony and oxymorons to show how society operates outside the bounds of game theory, where even if people know that cooperation produces the best results, they still choose to defect out of selfishness, and the result is unnecessary mutual harm.

At its core, Knives Out is a discussion on human nature hiding under the guise of a who-dun-it murder mystery. It offers great entertainment while also inviting audiences to reflect and think. Like other Rian Johnson films, Knives Out is a unique work full of surprises that doesn’t fail in delivering the unexpected, and confirms that Johnson is a true force to be reckoned with in American cinema.