Martin Scorsese crafts a masterful crime drama that asks if a gangster’s only fear should be living too long. 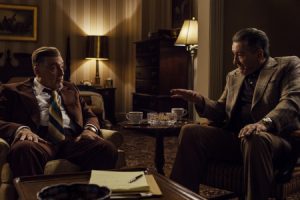 Although I wasn’t alive back then to experience it firsthand, watching The Irishman (2019) felt like the closest viewing experience to what Clint Eastwood’s Unforgiven must have provided back in 1992, as Scorsese’s latest is a film of epic proportions in all the right ways. It reunites powerhouse actors whose names have become almost synonymous with the genre, teams them up with one of the most influential filmmakers to ever live, and sets out to grapple with themes that demand to be brought back to the big screen by only this cohesive unit at only this exact point in their historic careers. In a way, this feels like it should be the last gangster movie ever made.

Adapted from I Heard You Paint Houses by Charles Brandt, The Irishman backpedals through history as a former mob hit man, Frank Sheeran (Robert De Niro), recalls his account of the disappearance of Jimmy Hoffa (Al Pacino). Though Sheeran narrates the story’s happenings from a nursing home in the final days of his life, the film uses some admittedly mind-boggling de-aging CGI to travel all the way back in time to when Frank met Russell Bufalino (Joe Pesci) at the age of 20 years old and first encountered the world of wise-guys, to his final days on Earth. While De Niro, Pacino, and Pesci are certainly the stars of the show, the cast is filled out with too many knockout performances to count, from Scorsese day-ones like Harvey Keitel to young guns like Boardwalk Empire‘s Stephen Graham.

Those expecting a film directly in the vein of Goodfellas may be setting themselves up for disappointment. One might assume that The Irishman would be Scorsese’s darkest, most explosive dive into the mob yet because it is told from the perspective of a hitman as opposed to a Henry Hill character, but this is not the case. In fact, The Irishman is rather sweet, nostalgic, and quite frankly, the most consistently funny film from Scorsese’s canon outside of The Wolf of Wall Street (2013). Those familiar with his work will pick up on his filmography’s thematic through lines, and the conclusions this film comes to in the last hour pack a gut punch that has been winding up since Mean Streets (1973) almost 40 years ago.

Cutting through such rich, conspiracy filled history as the assassination of John F. Kennedy and the disappearance of Hoffa in (only) three and a half hours, while reaching discernibly bold conclusions, may be an impossibly tall task. Wisely, though, The Irishman avoids getting lost in a swamp of details by letting history provide a backdrop, and allowing time to wash away the importance of what really happened. At its core, The Irishman is really about a man who lives longer than somebody should in the world of the mob. Having driven away his family and lost all of his friends, Sheeran is forced to reckon with the decisions he’s made, the people he’s hurt, and the loneliness that inevitably swallowed him whole. Near the end of the film, Sheeran eloquently says to a nurse, “You don’t realize how fast time goes until you’re there.” As we watch De Niro, Pacino, and Pesci hug it out time and again in what will probably be their last film of such incredibly epic proportions together, we find ourselves wondering where the time went, and begging Scorsese to give us more.