DIFF Review: F/11 and Be There 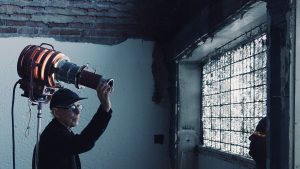 After becoming the youngest photographer ever hired by Life Magazine at the age of 23, Burk Uzzle had already made a legacy for himself that would’ve lasted well beyond his years, but he didn’t stop there. For decades, Burk traveled the world among the ranks of the best photojournalists the field has ever seen, completing project after project that brought subjects to light who nobody else ever gave much credence to. Now 80 years old, Burk devotes most of his time portrait photography of African-American communities; a relationship that sparked from Burke’s love for African-American gospel music.

There is nothing in Burk’s life that he doesn’t commit all of the vigor and passion he possesses towards, and the film’s rhythmic, percussive score perfectly matches that sentiment, demanding the same attention that Burk’s personality does. While many of us probably mozy around museums glancing at this painting or that painting without much consideration for technique or style, Burk analyzes every snippet of the canvas, searching for moments he thought would’ve been captured in a Cartier Bresson photographic had he been on the scene. So goes everything in Burk’s life; he’s attentive to what many of us would never stop to look at, and is a champion of independent thought, always considering the idea of floating against the mainstream.

In a Q&A following the film, Waters explained that he aimed to highlight three aspects of Burk’s life: his legacy, his commitment to social activism, and his life “out of the wild.” Surely, Waters set his goals ambitiously high, but he accomplishes all of them — and then some, thanks to how Burk never shies away from saying what he believes and doing what he wants. Whether he’s expressing his belief that the country’s institutions are responsible for racism in the United States or asserting that journalism today only focuses on and considers “surface values”, his philosophizing is impossible to resist. Burk says, “The point of art is to reflect what’s in your heart,” and F11 and Be There not only shows what’s in Burk’s heart but touches your own.