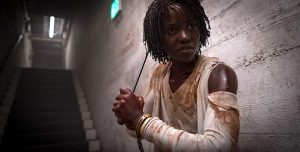 Let’s set the record straight from the get-go. Jordan Peele’s newest film, Us, should not be judged solely by drawing a comparison to 2017’s Get Out. Surely, his visual style and directorial vision can serve as a throughline to further reinforce what will become trademark aspects of a “Jordan Peele Film” in the same way a Scorsese, Anderson, Tarantino, etc. film has become immediately recognizable, but Us is a completely different animal than Get Out. Peele’s debut feature is highly accessible and understandable for all moviegoers that possess a rich, palpable subtext that offers further socio-political considerations for those willing to dive deeper once the credits roll. Us, on the other hand, wants to be more elusive, purposely trying to confuse viewers and leave them questioning what exactly it is they just watched when the film concludes, in addition to pondering the “deeper meaning.”

Set in Santa Cruz, Adelaide Thomas (Lupita Nyong’o), her husband, Gabe (Winston Duke), and their two children, Zora (Shahadi Wright Joseph) and Jason (Evan Alex) venture to their new beach home to relax with their family friends, the Tyler’s. However, Adelaide fears that her doppelganger whom she encountered at the same beach as a child in 1986 is closing in on her. Though her husband assures her she’s overreacting, her worst fears are confirmed when carbon copies of everybody in the Thomas family appear in the driveway one night with murderous in time. From this point on — avoiding spoilers — things get out of hand quickly for both the characters and, unfortunately, the film itself.

The first 20 minutes of the film leading up to the inciting incident is everything we had hoped for; laughs, thrills, frights, and most of all, mystery. But when the doppelgangers show up, Peele shows us his cards too quickly in all the wrong ways, presenting the enemy a little too closely in a way that ends up reducing the initial fear factor. The interactions that occur between the Thomas’s and their twins create a sense of confusion and deepen the mystery of the plot thanks to some cryptic conversations, but the infrequency of the slow, gut-spilling expositional dialogue interspersed with confusing images (you’ll know what I mean) gets frustrating after a while. That being said, Peele doesn’t disappoint in the most important moments, delivering some truly frightening scenes that will make any viewers’ palms sweat, as well as some crafty uses of tonally contradicting music that is some of the best we’ve seen in that vein since Reservoir Dogs.

Overall, Peele’s knack for crafting uniquely terrifying moments and his irresistibly original style is so endearing that it makes up for the film’s weaknesses. This may not be an instant classic in the way that Get Out was, but that’s okay. Us is just another indicator that Peele is on his way to being — if he isn’t already — one of the great filmmaking voices of this generation, and we can’t wait to see what he has in store for us next.