Terry Gilliam’s long awaited feature may get a little too lost in La Mancha here and there, but it’s still one hell of a ride. 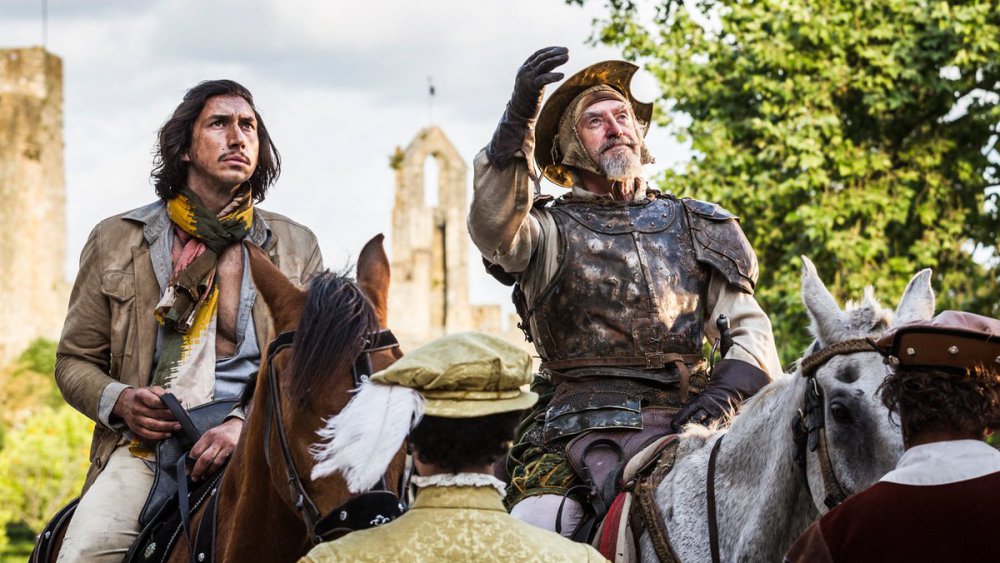 After more than 25 years of stop and start production for a film that has joined the ranks of the most cursed productions in film history, The Man Who Killed Don Quixote is finally here. While it may be tempting to be unconditionally sympathetic to the final product — especially for those who have seen the documentary Lost in La Mancha (2002) — on account of the production circumstances, it still remains imperative to view Don Quixote based on what it is now. Not what it could have been, or maybe even once was. In that light, The Man Who Killed Don Quixote is a scattered, sometimes incoherent film that at times knocks homeruns out of the park, but also strikes out in three pitches at others.

The film follows Toby, a creatively tormented advertising director who is filming a commercial outside of a small town in the Spanish countryside, where he produced a student film called “The Man Who Killed Don Quixote” many years ago. When trouble arises on set, in part due to an affair with his boss’s wife, and Toby goes into town, he finds the man who he had once cast to play Don Quixote now fully believing that he is indeed the real Don Quixote. He even thinks Toby is his squire, Sancho Panza. When they are suddenly wrapped up in a situation that causes Toby to run from the local police, the two are forced to stick together in what becomes a series of sprawling misadventures.

To begin, the performances by Adam Driver as Toby and Jonathan Pryce as Don Quixote showcase both actors at their best. They perfectly capture the ridiculousness that is so often a staple of Gilliam’s characters, and deliver the goods when it comes to zinging one liners and other comedic gestures. However, the relationship between the two characters is never given the attention that it deserves. For most of the film, the two only interact on the basis of Quixote treating Toby as a “peasant,” and not heeding his squire’s advice to avoid doing dumb, disillusioned things like fighting windmills he thinks are giants. Toby, in response, continues to reiterate how pathetic Quixote is and the two never really sort out their differences man to man. The result is a feeling of great distance between the two characters that undermines some scenes later on in the film that had the potential to be emotionally resonant.

Directorially, Gilliam’s vision is as strong as we would expect it to be. Those who have seen any of his films, from Brazil (1985) to Fear and Loathing in Las Vegas (1998) are aware that Gilliam’s sets and camera angles are always fresh and on point; in Don Quixote’s case, he again doesn’t let us down.

The real problems in the film emerge from the script. The first hour lacks any type of coherent structure whatsoever, and most of the conflicts that emerge aren’t quite silly enough to win us over with the absurdity of their spectacle. Once Angelica, who was once a young girl that dreamt of being an actress but is now a call girl, is introduced as Toby’s love interest, the film turns onto a promising path. Toby tries to save her from an evil Russian business mogul, but Angelica seems to want no parts of him after all these years. However, just like the relationship between Toby and Quixote, the film doesn’t ever really explore the characters’ relationship with one another. Sure, it takes some surface level stabs at how Toby’s student film derailed the live of those who were a part of it, but it never really unpacks the box in a meaningful way.

Though it may seem otherwise, The Man Who Killed Don Quixote is still a very enjoyable film that delivers more often than it doesn’t, mainly in the comedic aspects of the film. Though there are some structural problems, it was a joy to watch Gilliam’s long awaited passion project unfold on the big screen after all these years. At the end of the day, Gilliam once again proves that he is willing to leap into the unknown in an attempt to deliver daring and unique films for audiences which crave originality in an era of filmmaking that often lacks such creativity. And in this way, he should be applauded for the not so perfect, but still impressive achievement that is The Man Who Killed Don Quixote. ​