The Only Thing We Have to Fear is Fear Itself

Driving down the winding road into the city of Cape Town, Table Mountain looming over and multiplying in size, Howard Shore’s Gondor theme from The Lord of the Rings played through my mind. I had finally arrived in the city I had long dreamt of visiting and it felt as though I had entered into a distant land, one taken out of J.R.R. Tolkien’s novel. To my left was a grand peak, while to the right was a vibrant city, a gateway to the rest of the world. Yet, once settling down at our home for the next seven weeks, a German-owned bed and breakfast and spending the next day downtown, at the V&A Waterfront, and at the pristine Camps Bay, the distant land felt strangely familiar. 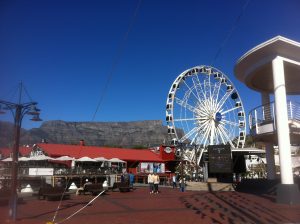 The Gateway to the West aka the V&A Waterfront

Although slightly comforted stepping into a mecca of America-centric commercialism, I felt uneasy visiting the waterfront, a place where tourists could comfortably live during their “visit” to South Africa: here, people could easily isolate themselves from the rest of South Africa. With restaurants, shopping, easy access to attractions like a Springbok Rugby Museum and a coastline golf course, one’s experience of Cape Town could be confined to this waterfront wonderland. I’m guessing most have little to no idea about the disease of apartheid that plagued their host country and the cancer of racism that persists to this day. Even less likely is awareness of freedom fighters, like Steve Biko or Hector Pieterson, who became martyrs in the struggle against apartheid.

If one takes a ten-minute walk into the heart of the city, you will encounter a stark reality: like any major metropolitan center, you see homeless people trying to stay warm in doorways, you see men, women and children begging for food and money, you see people relieving themselves in the street because they are not allowed inside a building to use a proper facility. Yet, amidst these unfortunate realities, you also witness a blend of diversity: in contrast to the primarily white complexion of the waterfront, you encounter an Indian restaurant owner, a black artist selling beautiful work at a stand, a colored woman preparing a scrumptious-smelling dish and a red-headed white college student, on his way to begin his internship at the District Six Museum. 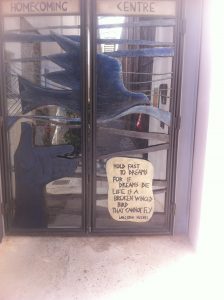 The Entrance to the District Six Homecoming Center, the museum’s office and a place where former residents gather to share their stories of life in the now-deserted neighborhood

The District Six Museum was established in 1994 for the purpose of preserving the stories of the neighborhood’s residents, who were forcibly evicted by the apartheid government, beginning in 1966. After kicking economically prosperous and multi-racial families out to distant housing developments, the separated families were hit hard by the great distance and difficulty in commuting to the city to work. The apartheid regime felt threatened by the interracial dialogue and achievements made in the district, as it proved the absurdity of the domineering policy, so they forced mixed race families to separate: for example, if the father was black, he would be sent to a black township, while the white mother would be sent with the children to a whites-only township. To this day, the majority of the district remains flattened by the bulldozers that gradually came through. 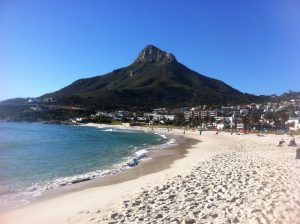 Yesterday morning, we had the privilege to meet Peter Storey, the former bishop of the Methodist Church in South Africa, a close friend of Bishop Tutu’s and a former minister at the Methodist Church in which the District Six Museum now resides. Through listening to him talk of his conviction to serve as an advocate for social justice as a disciple of Christ, who himself radically challenged the established authorities of his time, I realized the perpetuation of fear throughout time and the millions of lives it has ruined and/or taken: Jesus was executed because the High Priest, Pharisees, Sadducees and Romans feared his growing influence and call for justice; Stalin exterminated millions who opposed his oppressive regime because he feared they would expose him as a ruthless dictator; George W. Bush sent thousands of Americans to Iraq and Afghanistan while spreading a fear of Islamic terror; and back to the Lord of the Rings, the dark lord Sauron gathered a terrible force to attempt to destroy all who opposed him to eliminate the minute chance that his ring of power could be destroyed.

As the battle for Minas Tirith commences, if you have seen the film, a dastardly orc general proclaims, “Fear. The city is ripe with it” before catapulting the severed heads of Gondor soldiers into the fortified city. Even with the best defenses standing guarding them from the imposing force, Gondorian soldiers were overcome with terror, most abandoning their posts until Gandalf rode in to rally their spirits. Bishop Storey, with a little help from Tolkien, helped me fully understand what FDR meant when he said, “The only thing we have to fear is fear itself.”

As it was in South Africa, fear has become America’s Achilles heel: millions of Americans are scared of losing their current prosperity in society. Donald Trump has taken control of this fear and used it as fuel for his bigoted campaign for President. He speaks to the heart of those who don’t want a Hispanic to have the same opportunity given to their ancestors when they immigrated to the United States in search of a better life. His outrageous rhetoric is supported by those who are comfortable with swimming in their millions while millions of people barely get enough to eat, have no home, cannot afford essential medical care and have no access to a quality education. And he even appeals to those in need, like Thambo who we met last week in the slum of Alexandra, for they are tired of our nation’s inaction in providing for their needs and they believe every word Trump has to say because he is “outside the political system.” But, they fail to see the hate in Trump’s speech that will not only destroy the United States, but also have drastic consequences on every nation in the world. They fail to see that Trump is a pathological liar who plays off of the flavor of the day in order to promote himself and build his fortune. They fail to learn from the past that fear has only led to death and destruction. Above all, the United States is in a dangerous position: fear is at our doorstep and we must be able to throw its temptations into the fire before it consumes us all.

This entry was posted in David. Bookmark the permalink.