Confronting and reimagining the savior complex

A hallmark of summer vacation is the streamlined photos your Facebook friends share of themselves standing among the young Kenyan students they’ve been teaching English, or the Tanzanian family they’re staying with for four weeks. It’s an image that represents different experiences and people, but is a repeated formula of the American do-gooder selflessly trekking to various parts of the world in the name of service. It creates a trope—that of the western savior.

When documented in a photograph, whether posed or not, the unfamiliar interactions between people who differ in privilege and experience elicit both praise and criticism. There’s the acknowledgement that the volunteer took a twenty-hour flight to spend their summer engineering medical equipment for a hospital—that’s objectively good. But then there’s the reality of their intentions. When I see the photos of a Facebook friend with their Panamanian host sister, I unconsciously invent a narrative harshly critical of the volunteer to explain the situation: They must be so proud of how much they have helped a poor, hungry, and sad young girl.

After spending a week in Johannesburg, I have become that person posing in a photograph as a volunteer entering a foreign community. On Friday we visited Albert Street School, a stunningly bright school of students who are mostly Zimbabwean refugees—in 2012 and 2013 the students achieved a 100% pass rate on their A-levels—and I spent an hour talking with a dozen 11th grade students, ranging in age from thirteen to seventeen. We covered essentially all bases during our conversation from dating to affording university in the United States to Jim Carey movies. A student asked, “Do you learn about South Africa in America?”. The answer was no.

We took selfies together and exchanged emails. So I’ve finally done it. I took the twenty-hour flight. I made it to South Africa. I took the photo. But my experience at Albert Street wasn’t at all what I thought it would be based on the summer of service scrapbook photos others have shared. I engaged deeply with these students, as I’m sure happens between other volunteers and their host communities. Still, we cannot escape the question of ethics—what are our roles and responsibilities, and what are the boundaries? That’s the constant question we’re forced to meditate on especially during these eight weeks because we’re here now, doing this for real. We are trying to do something good. The criticisms I’ve held toward the perpetrators of service photo sharing on Facebook are a reflection of, I think, my own biases. I cannot change the number of rivers and tributaries to which my privilege extends. And unfortunately my position in a world of imbalanced privilege creates devastatingly wrong images of others and my relationships with them. When it comes to the socially disadvantaged, not just in South Africa, it’s easy to feel a sense of pity. It sprouts from my acknowledgement of my unfair privilege, but it creates a grossly problematic rhetoric: “These poor people. I must help them.” That was the language I projected onto other Good Samaritan volunteers I criticized. But that language was challenged when I met these students and they showed me their spirits (“We party a lot.”), and their attitudes (“We must work hard at school.”). They showed me that they don’t need me to save them.

Similarly, in Alexandra, a black township in Johannesburg that we visited (townships were created under Apartheid to house non-whites away from whites), we confronted poverty like most of our group has never seen before. With over a 50% unemployment rate, the government has never kept its promise of improving housing there. Meanwhile, travelers, including ourselves, purchase tours of the area to see poverty (and of course, Nelson Mandela’s home), objectifying the citizens. To us it is a spectacle of black poverty.

It was uncomfortable for us to walk through the streets. I tried to hide my water bottle, which conspicuously says DUKE. Our tour guide Thabo, a resident of Alexandra himself, introduced us to an astonishing amount of people who all seemed enthusiastic to greet us despite our invasive presence. We wound up taking photos together. We saw Thabo’s home, his kids, and his grandchildren. They were so warm and welcoming.

There are ethical issues with creating a spectacle of a community. We form them into an archetype. For the communities Duke Engage works with, we think we must reach out our hands to lift them up. It is difficult to admit, but try as I might to diminish it, the misconception of the desperate/sad/poor dweller of the developing world has been an image that has affected how I perceive others and how I understand privilege. It still might—I don’t know how or when such deeply ingrained and nurtured images can be extinguished. The residents of Alexandra face the problems of housing and unemployment, but I cannot play their savior. The students at Albert Street have big dreams: many want to become doctors, one a gynecologist, and another a lawyer. But I cannot make that happen for them.

Our harmful images strip people of their dignity and humanity because they are different from us. Dolores Huerta said (in a different context, but they’re still powerful words to use here), “Professional farmworkers who know how to do a number of different jobs, whether it be pruning or picking or crafting, they see themselves as professionals, and they take a lot of pride in that work. They don’t see themselves as doing work that is demeaning.”

Duke Engage participants will be the first to admit the ethical problems with the summer program. We do not change lives—we staple papers, run errands, and do favors. The Duke Engage tee-shirt slogan, “Challenge yourself. Change your world.” wrongly suggests we are the harbingers of change, a sort of crusaders. One of our program directors, who was at Duke when Duke Engage was invented, reminded us its conception was “a shrewd response to the lacrosse scandal.” In the name of service, we travel around the world, and gain life-changing experience to put on our professional resumes. This trip is about our own self-improvement. We are simply an army of western saviors.

But maybe part of the Duke Engage tee-shirt slogan makes a good point. What does it mean to challenge ourselves? We’re entering communities vastly different from our own and experiencing discomfort from our interactions with the people in our organizations and even those in our groups. But I think challenging yourself has to do with questioning the very threads of your thought—what you don’t really notice until you zoom in and see that those threads hold the entire fabric together. It’s not the moments of discomfort you experience with people different from you that really changes you. It’s when those moments pierce deeper and the discomfort swells within you. That’s something I’ve started to experience this past week at the Albert School and in Alexandra. 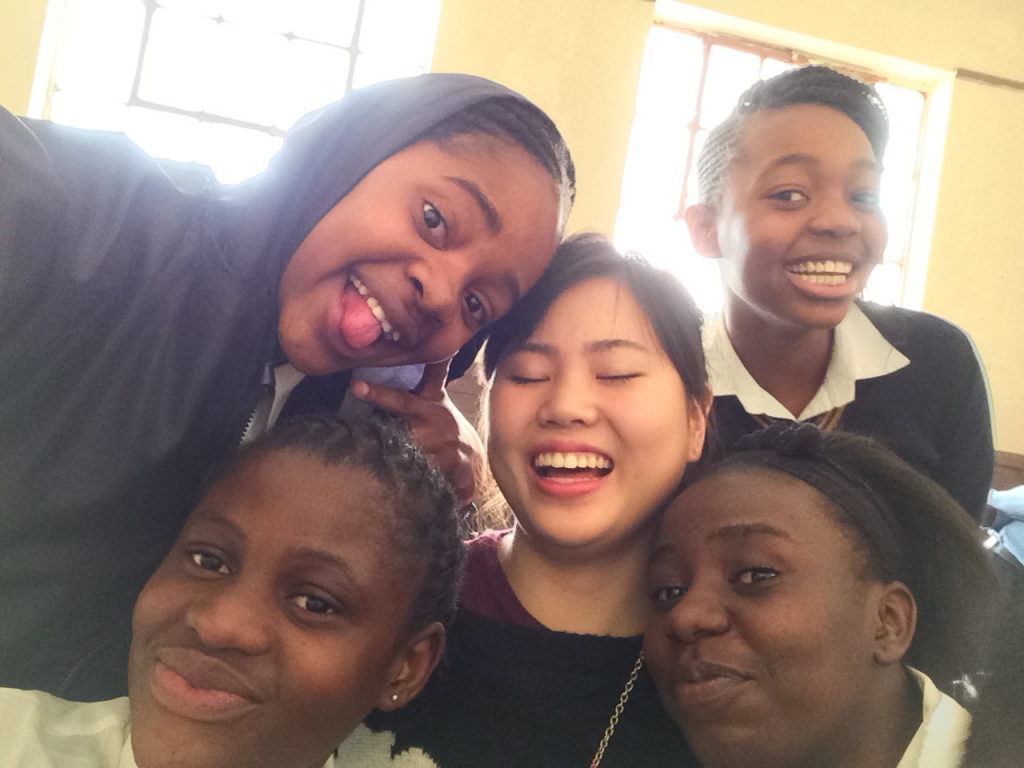 This entry was posted in Jennifer. Bookmark the permalink.

1 Response to Confronting and reimagining the savior complex