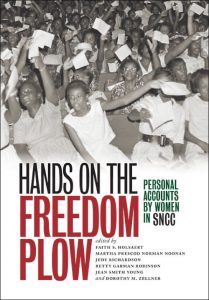 The books and readings will be sent to the participants in advance. The films will be shown during the institute. 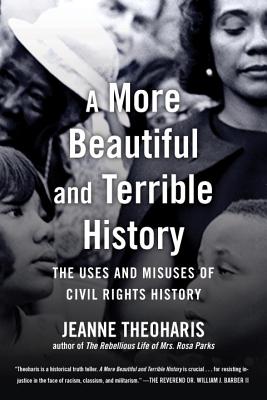 Theoharis, Jeanne. A More Beautiful and Terrible History: The Uses and Misuses of Civil Rights History. (Beacon Press, 2018). A non-academic, popular historiography that challenges educators to revamp curriculum to include a fuller, more critical history of the Civil Rights era.

SNCC Digital Gateway
https://snccdigital.org
This documentary website tells the story of how young activists in SNCC united with local people in the Deep South to build a grassroots movement for change that empowered the Black community and transformed the nation. The SNCC Digital Gateway portrays how SNCC, alongside thousands of local Black residents, worked for Black people to take control of their political and economic lives. It also unveils the inner workings of SNCC as an organization, examining how it coordinated sit-ins and freedom schools, voter registration and economic cooperatives, anti-draft protests and international solidarity struggles.

Civil Rights Movement Archive
http://www.CRMvet.org
Resources on the Southern Freedom Movement compiled by those who lived it. Includes a bibliography, timelines, photos, primary source documents, and lists of speakers.

Chafe, William. “Inch by Inch” and “The End or the Beginning?” in Civilities and Civil Rights: North Carolina, and the Black Struggle for Freedom (Oxford University Press, 1981)

McGuire, Danielle. “A Black Woman’s Body Was Never Her’s Alone” in At the Dark End of the Street: Black Women, Rape, and Resistance — A New History of the Civil Rights Movement from Rosa Parks to the Rise of Black Power. (Vintage, 2011).

Parks, Rosa. “‘Tired of Giving In’: The Launching of the Montgomery Bus Boycott.” Sisters in the Struggle.

Payne, Charles. I’ve Got the Light of Freedom: The Organizing Tradition and the Mississippi Freedom Struggle. (University of California Press, 1995). Chapters 1 and 2.

Payne, Charles. “‘Sexism is a helluva thing’: Rethinking Our Questions and Assumptions.” in Civil Rights Movement from the Ground Up.

Ransby, Barbara. “Ella Taught Me: Shattering the Myth of a Leaderless Movement.”

Ransby, Barbara. “Fighting Her Own Wars” and “Mentoring a New Generation of Activists” in Ella Baker and the Black Freedom Movement: A Radical Democratic Vision (Chapel Hill: University of North Carolina Press, 2003)

Eyes on the Prize. The award-winning 14-hour 1987 television series produced by Blackside and narrated by Julian Bond. Through contemporary interviews and historical footage, the series covers many of the major events of the civil rights movement from 1954-1985. (PBS)

Dirt & Deeds in Mississippi (2015). Produced and directed by David Shulman. California Newsreel. The film reveals the extraordinary story of a Delta community called Mileston in which 100 sharecropping families gained control of 10,000 acres of some of the best land in the state as a result of a radical New Deal era experiment in the 1930’s and in turn, became leaders of the movement in the 1960s. More.

Freedom on My Mind. The first film to chronicle, in depth, the story of Freedom Summer. It vividly tells the complex and compelling history of the Mississippi voter registration struggles of 1961 to 1964: the interracial nature of the campaign, the tensions and conflicts, the fears and hopes. It is the story of youthful idealism and shared vision, of a generation who believed in and fought for the principles of democracy. More.

Freedom Never Dies: The Legacy of Harry T. Moore (2000). On Christmas night 1951, Harry T. Moore and his wife Harriette retired to bed in their white frame house tucked inside a small orange grove in Mims, Florida. Ten minutes later, a bomb shattered their house, their lives, and any notions that the South’s post-war transition to racial equality would be a smooth one. Harry Moore died that night, his wife nine days later. Harry T. and Harriette  Moore paved the way for the ‘60s civil rights movement by championing equal pay for black teachers, organizing the black vote and publicly condemning racist attitudes and actions of local, state and national officials. Despite a massive FBI investigation and repeated inquisitions, the murders of Harry and Harriette Moore have never been solved.  More.

Freedom Song (2006). By Phil Alden Robinson. Based on the actual history of the Student Non-Violent Coordinating Committee (SNCC), student activism, and voter registration in McComb, Mississippi, during the Civil Rights Movement. (TNT)

Scarred Justice: The Orangeburg Massacre 1968. A documentary film that brings to light the story of the attack by state police on a demonstration in Orangeburg, South Carolina — leaving three students killed and 28 injured.

You Got to Move. (1985). By Lucy Massie Phenix and Veronica Selver. This documentary follows people from communities in the Southern United States in their various processes of becoming involved in social change. The film’s centerpiece is the Highlander Folk School, a 50-year-old center for education and social action, including the labor, voting rights, and sit-in movements. More.