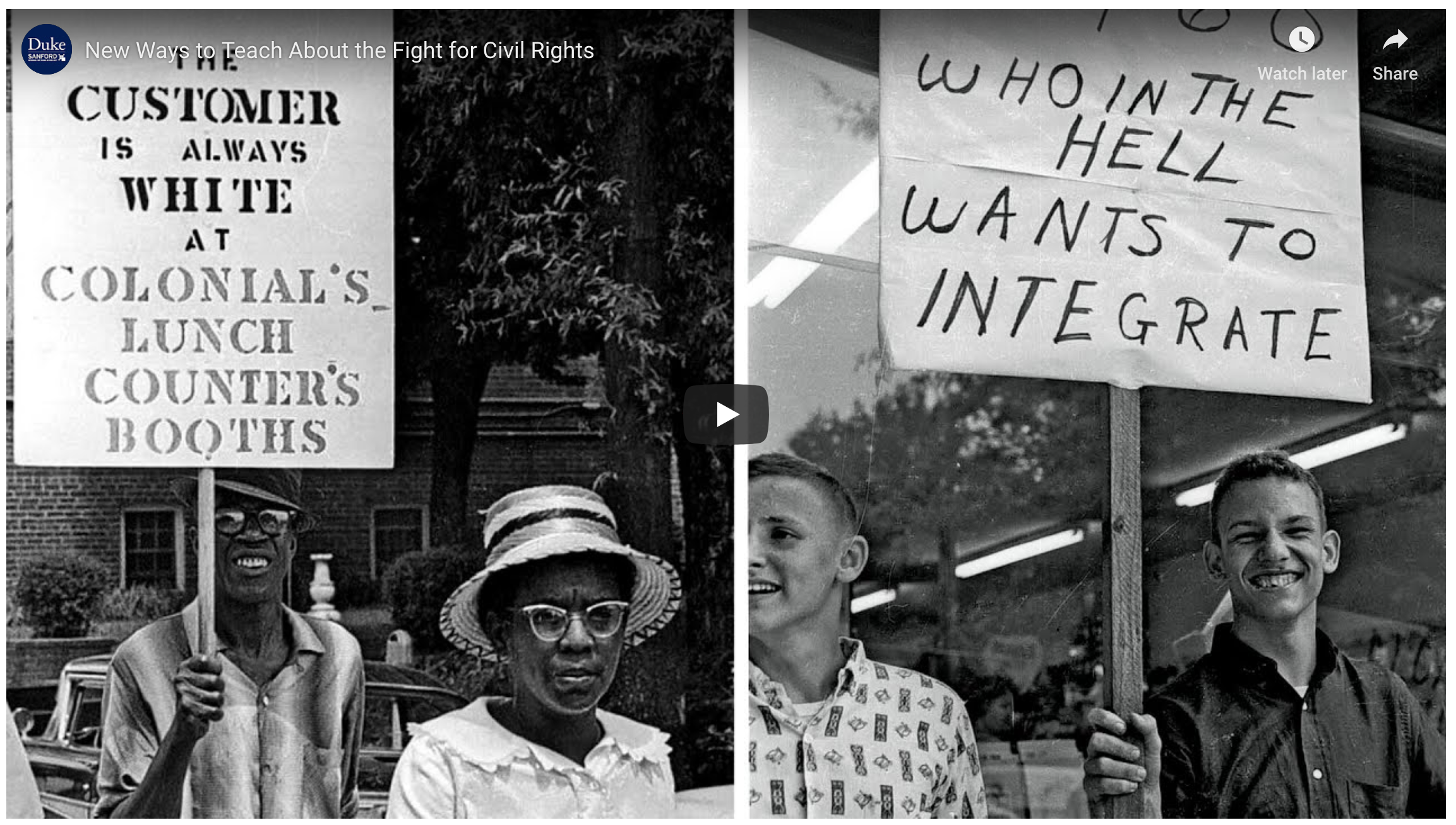 In the summer of 2018, thirty classroom teachers were selected from across the country to study the bottom-up history of the Civil Rights Movement, addressing key narratives that challenge the textbook version of history. They learned from people who were active in the Civil Rights Movement and from leading scholars of the era including William Chafe, Charles Cobb Jr., Courtland Cox, Emilye Crosby, Hasan Kwame Jeffries, Charles Payne, Barbara Ransby, Judy Richardson, and more.

Some of the key narratives and themes that participants explored were:

In their evaluations, teachers commented on how the institute changed them personally and how it will change their teaching. Here are just a few of their reflections:

The institute grew me. I have stepped out of everything that I thought I knew and I have been expanded. I feel more confident in teaching a narrative based on real people and their stories and not the mythical characterizations of history that focus on a protagonist and an antagonist. I have changed because I now see my classroom as a platform for change.

This institute has completely transformed how I think about the Civil Rights Movement and ultimately how I am going to teach it in the classroom. I have received so many resources to use for teaching this hard history. I am a part of the movement that will change the way history is being taught and preserved. We are making history. I am making history. Words cannot express how happy and powerful this program has made me feel. My life has changed.

I learned lessons about education, community-based engagement, and processes of social transformation that placed women front and center, and my mind soared throughout those talks —at times I felt lifted out of myself.

We share here daily highlights from throughout the three weeks, including insights from the presenters, field experiences, lessons, and teacher reflections.

A group sing of “Woke Up This Morning with My Mind Stayed on Freedom” started the day and set the tone for the next three weeks.

To get to know each other, the participants wrote on a paper cutout of a footprint, “in whose shoes am I walking for justice” or “a stand I have taken in these shoes for justice.” D.C. teacher Jessica Rucker (in the photo below) wrote,

I move in the spirit of Mildred Ann Wilkins, who in the 1940s migrated from Loudoun County, Virginia to Washington, D.C. as an act of resistance against the racial and economic (state-sanctioned) apartheid of the South. She sowed seeds of rebellion through her single audacious act . . .

The footprints were placed on the wall on a symbolic path of justice.

Black Activism Leading Up to 1940

Professor Adriane Lentz-Smith (author of Freedom Struggles: African Americans and World War I) gave a powerful presentation on how the history of African Americans in WWI has a direct connection to the modern Civil Rights Movement. She also critiqued the traditional narrative, noting:

To say that they tilted at windmills is too benign; windmills don’t shoot back. Rather, they fought. They fought segregationists in the former Confederacy, Democrats in Washington, brutal police in towns and cities across the nation. . . . To treat their story as everyone’s story is to understate their courage. To isolate their story, however, is to misrepresent their agitation as sui generis. . . . Change that “seemed to appear out of nowhere, was actually more than a century in the making.” This was trench warfare, never a blitz.

Lentz-Smith told the history through stories of her parents and teacher activist Kathryn Magnolia Johnson (1878-1955). Here are a few of the participants’ reflections from the day:

Today’s discussion urged me to think more deeply about the presence of civil rights activism before WW2, specifically during WW1. When I taught African-American Studies, I have pointed out the “Double V” Campaign that emerged during the WW2 era, yet this was an opportunity revisit that narrative to further ground the fact that the history of Black Freedom Struggle did not occur as a collection of “episodes” but rather as “flows” wherein a particular point in time is vitally connected to a prior era. Black activists and organizers during the ’40s and ’50s were mentored by those who had done similar work in the ’10s, ’20s, and ’30s.

I learned that studying WWI is integral to understanding the Civil Rights Movement. I was reminded that narratives are at the heart of history.

The lecture on WWI by Adriane Lentz-Smith was amazing and I cannot wait to incorporate more early 20th century activism in my curriculum. Reflection and discussion time was also SO USEFUL since teachers are rarely afforded that opportunity.

People of the Civil Rights Movement

Each participant was given the name, photo, and short bio of one of the people featured on the SNCC Digital Gateway or CRMvet website. They engaged in a mixer activity to learn about the activism of their peers.

As a follow-up assignment, they composed “Write That I” poems about their individual, using the approach by Rethinking Schools editor Linda Christensen and information from the respective websites and their readings. Teachers took turns reading their poems to the group throughout the institute.