Home » About » History of Libraries Assembly

In 2018, the Librarians Assembly changed its name to Libraries Assembly and formally extended membership to all staff working within libraries at Duke. This change was motivated by a commitment to become a more equitable, diverse, and inclusive organization that represented all library staff.

The following history is from the finding aid for LAs historical records stored within the Duke University Archives: 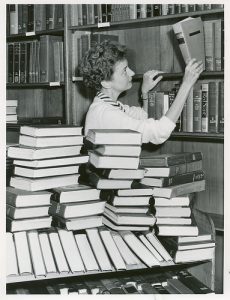 The Librarians Assembly (LA) is the staff association for professional librarians at Duke University. Its purpose is to serve as an advocate for excellence in librarianship; to promote the interest and participation of its members in the affairs of the libraries, the University, and the profession at large; and to make recommendations concerning planning, policies, and procedures to appropriate library and University officials.

In 1970, then University Librarian Benjamin Powell appointed the Branson Committee (led by Barbara Branson) to compile and present the results of a study of professional staff in academic libraries in the United States, including information on status, salary scales, and fringe benefits. The committee was formed in response to efforts to formalize the status of professional librarians by the University’s Personnel Office (now Human Resources). These efforts would have categorized professional librarians without clear criteria and without input from the University Librarian or library staff, and would have offered significantly different benefits packages based on rank and status. The Branson Comittee’s report, submitted in January 1971, provided information about library staff at other academic institutions and offered recommendations for Duke librarians. The report suggested a system of promotion based on merit and experience, allowing librarians to advance in rank while holding the same position; the report also recommended that library staff attempt to join the Academic Council.

On December 4, 1973, the Librarians Assembly was formally created following a unanimous vote of professional librarians from the Perkins and Medical Library systems. In May 1974, the Librarians Assembly and Benjamin Powell approved “Ranking Structure for Duke University Librarians,” “Duke University Librarians Assembly,” and “Committee on Appointment and Promotion.” These papers were approved by then-Provost Frederic Cleaveland in December 1974 and became fully effective. The Executive Committee, Bylaws Committee, the Committee on Appointment and Promotion, and the Professional Affairs Committee were designated as standing committees.

Throughout 1975 the Bylaws Committee, the Committee on Appointment and Promotion, and the Committee to Study the Professional Library Staff Fringe Benefits worked to create and strengthen regulations and documentation on the self-governance of the professional library staff. The Law Librarians voted to join the Librarians Assembly in June of 1975. In summer of 1976, the Assembly Bylaws were declared to be in effect and it was also determined that a librarians must have a professional degree from an ALA accredited library school or equivalent foreign degree in order to have a professional appointment. The Bylaws Committee continued to revise the Assembly regulations throughout the 1970s, with input from the library directors and the Office of the Provost.

Interested in learning more about the Libraries Assembly history? LA records are available through the Duke University Archives.