The summer school in Venice worked as an inspiration on the analytical side, but it mostly provided fertile food for thought for rethinking our responsibility as researchers. Facing ethical issues and publication topics encouraged deeper inspections of the project.

After Venice, the project has continued in Trento at FBK: the model has been developed adding the terrestrial photogrammetry and processing the entire point cloud to get the complete orthophoto of the archaeological site.

Once the model was ready, a visibility analysis has been tested. Specifically it is meant to assess the way the sanctuary of Aesculapius appeared to ancient pilgrims through the monumental arch, based on the visibility of the sanctuary itself while the pilgrim approached the temple. Our GIS lectures in Venice set the path for a visibility inspection where the third dimension is not only a factor of the algorithm but also a way of displaying and of explaining the visibility output. 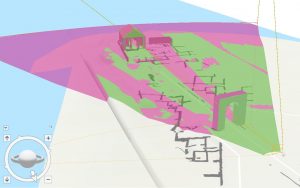 Testing a 3D visibility assessment of the Sanctuary of Aesculapius, through the arch of the processional road. The point of view can be moved along the road, in order to assess the variability of the visibility.

We tried to drive it further by applying a real 3D visibility, thanks to a new tool of ArcGIS Pro 2.2 (3D Exploratory Analysis). It allows to import 3D models inside a GIS environment and to take account of them in applying algorithms. It is quite a revolution for a GIS software: now GIS can admit more than a height value for the same location (i.e. the floor, the ceiling, the roof). In this case the monumental arch at the end of the processional road has been modelled and used to assess the varying of the visibility as pilgrims approached.

Meanwhile, in October, the project was presented at the conference in Crete “Unlocking Sacred Landscapes”, where a particular focus on the Sanctuary of Aesculapius was explained. We had very interesting feedbacks and we met also very exciting case studies, involving agent-based simulations applied to the archaeological site of Ostia, or Virtual Reality combined to astronomical reconstruction software. Our contribution has been recently submitted on an peer-reviewed topical issue in the Open Archaeology Journal by de Gruyter.

The project is currently been integrated with other two research programs aimed to survey all the vertical structures of the site and to propose a 3D reconstruction of the ancient city.

So, at the end, the idea is to have a good 3D model of the ground, with a precise cartography, which is the first focus of my project, with all the vertical structures overlapping, with linked information, and the philological reconstruction of the as-it-was as a third layer.