The aim of the project “Fortifications of the city of Trogir: Visualising changes from 220BCE until 1900CE”, as presented at DAH Venice 2018, was to collect data from different sources and to structure them into the GIS database. This GIS database was meant to be a scholarly output that would support schematic 3D models representing the changes and the development of Trogir fortifications during the long-time period. The data comprise the physical remains of the city walls, results of archaeological excavations, archival blueprints, historical maps and images, local historiography literature, notarial documents and scholarly literature.
Although it was obvious that the quantity and the quality of data before 1500CE and after were considerably different, the first plan was to split the work on collecting and analyzing data between Ana Plosnić Škarić and Ana Šverko around that year and produce a joint GIS database. The experiences learned from other participating projects made us reconsider. Therefore it was decided that APS would continue with the extensive work on structuring GIS database and producing schematic models, while AS proceeded to work on more detailed 3D presentations that would be achievable due to the sources from after 1500 that reveal more information. The majority of the materials from 1500 to 1900 are precise archival blueprints and photodocumentation from Croatian, Italian and Austrian archives, and documentation showing the current state of the fortifications. Along with supporting materials – detailed written historical, land registry and land survey records – it is possible to very precisely reconstruct the condition of the walls, particularly around the year 1800. It is thanks to the rich written and visual records that the documentation from this period served as a starting-point for the creation of the original 3D model of the Trogir fortifications.
Methodologies and visualizations experienced from other participating projects, during presentations and discussions on DAH Venice 2018 and on group monthly meetings, keep giving us new ideas and challenge us further. 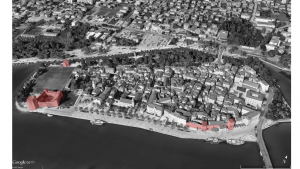