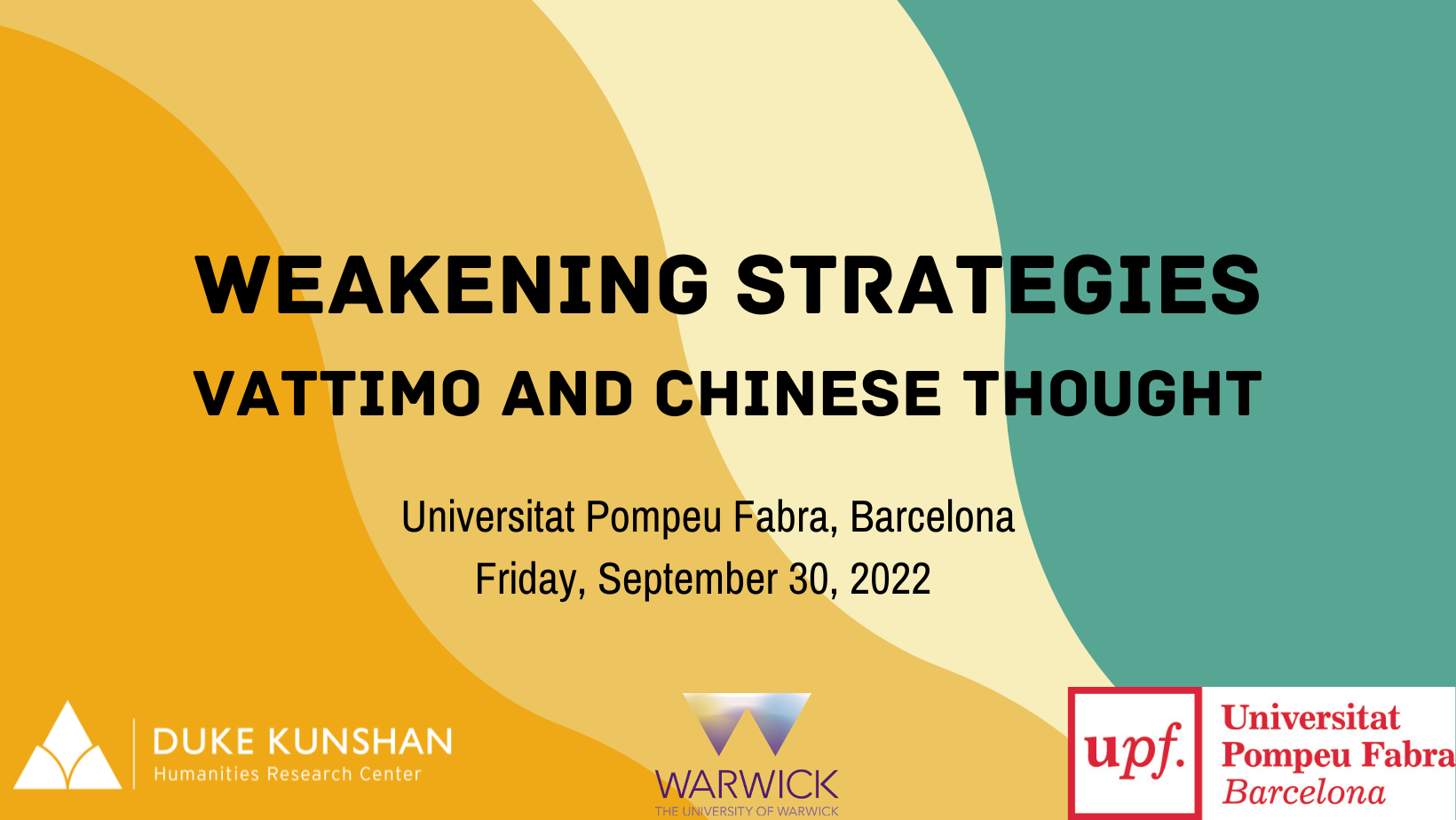 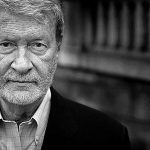 Gianni Vattimo (1936–) is one of Europe’s foremost contemporary philosophers, whose work has had a lasting influence on a broad range of fields including sexuality, theology, art and politics. He is known chiefly for the idea of “weak thought” (pensiero debole), which aims to weaken the strong narration of Western metaphysics and the violence of dogmatic positions. From such “weakening strategies” develop an ethic and political philosophy that opposes totalitarianism and fascism, a project that Vattimo undertook personally as a Member of the European Parliament. In his later work, Vattimo also connected weak thought to themes of kenosis (self-emptying), sacrifice, and secularization in religious and theological studies. In an era that emphasizes might, power, and strength, now is precisely the time to pay attention to weakness as a philosophical concept and ethical value, and to do so in a globalized, even multipolar context.

In this regard Chinese thought, and especially Daoist philosophy, can become a rich interlocutor with Vattimo’s philosophy. The Daode jing 道德經 emphasizes virtues of softness and passivity, stating that  “The soft and weak overcome the hard and strong (柔弱勝剛強).” The classical Daoist philosopher Zhuangzi, moreover, is known for his emphasis on perspectivalism, understanding the limits of knowledge, and critiquing those who claim to have a complete understanding of truth. Daoism and other forms of Chinese philosophy have an important role to play in investigating the concept of weakness, in conversation with Vattimo’s philosophical and ethical project.

Duke Kunshan University’s Humanities Research Center, in partnership with the Vattimo Archive and Center at Universitat Pompeu Fabra (UPF) is pleased to sponsor a one day symposium that aims to advance comparative understanding of the concept of weakness, in conversation with the Vattimo’s philosophy and Chinese thought. European speakers will be invited to attend in person where possible; speakers from China will attend via videoconference. Students from Duke Kunshan University’s program in Barcelona and students from UPF will be invited to attend.

All lectures take place in the auditorium of the Mercè Rodoreda building of the Ciutadella Campus of Pompeu Fabra University, located at Ramon Fargas 25-27, 08005 Barcelona.

1000 Opening Ceremony and Welcome from Tony Luna, Vice-Rector of UPF

Max Lacertosa: The Counteractive Force of Wuwei 無為 and Weak Thought
Although wuwei (無為, literally “non-action” but more properly “non-obstructive action”) and weak thought (in the sense of “weak ontology” or “ontology of decline”) were developed in very different contexts with diverse objectives, they share a common function: both wuwei and weak thought show a counteractive force by opposing the violent impositions of hegemonic postures and by facilitating the development of alternative positions. Thus, this paper argues that these concepts should not be regarded as passive ideas that renounce to participate in the dialectic of power. Rather, they are counteractions that undermine absolutist theories in order to redefine the idea of power itself: a power no longer based on the subordination of the object to the subject but aware of itself and its impact on the others. That is to say, a power that does not transform everything in material for exploitation but defines itself through the flourishing plurality of the others.

Graham Parkes: Weakening Thinking for Befriending Things
A major factor behind the current environmental crisis is our dysfunctional relationship not only with things of nature (animals, crops, trees, rivers, etc.), but also with the so-called inanimate things we deal with in our day-to-day lives (clothes, tools, utensils, and so forth). I suppose that Gianni Vattimo would follow Heidegger in pointing out that a certain kind of ‘strong thinking’ does violence to the nature of such things and is what’s behind our superior and aggressive attitude toward them. Also that he would follow Nietzsche in arguing that a better understanding of how things work would let us live more fulfilling lives by ‘becoming good neighbours with the closest things’. And would Vattimo further agree that a suitably weakened thinking would correspond with the Chinese Daoist practice of wuwei (non-interference) with respect to the ziran (spontaneous unfolding) of the myriad things? I leave it to the experts to answer these questions. In any case, a better understanding of things would surely lead to better treatment of them and reduce the amount of damage we’re causing to the planet.

Robin Wang: Weak Thought (Pensiero Debole) and Supple Way (roudao柔道): A Philosophical Critique and Companion to Life
This talk will take Vattimo’s weak thought and Daodejing‘s suppleness as an open and constructive space where a philosophical conversation and shared discourse begin. It will discuss three interrelated points: 1) How both the weak thought of Vattimo and the supple way of Dao function as a philosophical critique to their own cultural and intellectual heritage by weakening objectifying structure and returning to the variety of human existence; 2) What is a fundamental divergence that enacts the weak thought for a political engagement while the supple way unveils the body as a totality of human relationship to the world; 3) Against a metaphysical violence what contributions both weak thought and supple way may make to our troubled world.

Liangjian Liu (via Zoom): Reinterpreting Communism and Community through a Dialogue between Vattimo and Chinese Philosophy
Vattimo’s idea of weakening is revolutionary in several senses: it is new as far as the intellectual history is concerned; it is produced from today’s practice of human beings; and it is powerful to inspire possible philosophical revolution for the future. In a review of Vattimo and Zabala’s Hermeneutic Communism, an idea occurs to me, that is, it is time to weaken our dominant understanding of Communism and Community and reinterpret them through a constructive dialogue between Vattimo and Chinese philosophy, including Confucianism and contemporary Chinese thought. Thanks to the opportunity of participating this seminar, it is time to develop such an initial idea from the followings perspectives: weakening as a way of thinking in Xunzi and Feng Qi (1915-1995), weakening the leading historical framework of modernity, weakening the self-identity as a national citizen, and weakening the perspective boundaries as far as intellectual recourses are concerned. In such a way, I would also like to probe into out the possible communication between Vattimo and other intellectual Chinese traditions besides Daoism.

Erica Onnis: Hermeneutics as Koiné, the “Formless Form” of Dao, and its Epistemic Elusiveness
In many of his works, Gianni Vattimo states that hermeneutics may be entitled to express the spirit of the contemporary time, presenting it as the koiné of today’s Western culture. In this paper, I suggest that hermeneutics may somehow represent an even wider koiné, helpful in conceptualising some features of the Daoist philosophy as it is presented in the Daodejing. In this respect, the most significant concepts that can be mentioned are the processual, immanent, and self-spontaneous (ziran 自然) nature of Dao 道 and its epistemological ineffability, having it a “formless form” (wu zhuang zhi zhuang 無狀之狀). These two features seem to imply that no positive traits of Dao can be recognised as composing its metaphysical, stable core, and that knowledge cannot provide absolute, objective truths about it. To approach something like that, a strong philosophical thought, searching for stable structures of being and absolute and grounding truths, may not be the most suitable one, whereas a weaker thought, hermeneutical and closer to a nihilist ontology, might seem more appropriate (albeit with limitations).

Xie Ming (via Zoom): Vattimo’s Hermeneutics and the Virtues of Unknowing
This paper explores Vattimo’s post-metaphysical and cross-cultural hermeneutics in terms of Kantian schematism and cultural categories. Vattimo’s emphasis on “weak thought” can be construed as a hermeneutics of the real and its dissolution into the manifold of interpretations. Zhuangzi can provide analogous terms of understanding in relation to Vattimo’s historicization of Western ontology. Zhuangzi and Vattimo both emphasize the need to “unknow” (at least some of) the strong categories of episteme in cultural traditions. This common strategy calls for both dialogic and dialectical modes of understanding between and across cultures.

James Miller: Weak Religion, Secularization and Chinese Modernity
In his dialogues with René Girard and in Credere di Credere (Belief in  Belief), Vattimo makes the claim that the “negative” Christian doctrine of divine kenosis has led to the “positive” secularization that has occurred in Europe and the West over the past centuries. This argument may be compared with those of Gauchet, Taylor and others who argue that secularization is ineluctably entangled with Christianity. Vattimo, though rejects a “grand narrative” of secularization, progress and modernity, in favor of a “weak belief,” a “belief in belief,” predicated on a “weak ontology.” This paper places Vattimo’s ideas in a comparative context with Chinese religiosity, which arguably predates the West in terms of its embrace of modernity and secularization.

Massimilano Lacertosa is Assistant Professor of Philosophy at the University of Warwick. He completed his PhD in philosophy at SOAS, London, and  has wide interests that span ethics, continental philosophy, art, history, archaeology, photography, aesthetics and visual design. He is the author of From Metaphysical Representations to Aesthetic Life: Towards the Encounter with the Other from the Perspective of Daoism (Albany: State University of New York Press, forthcoming).

James Miller is Professor of Humanities and Co-Director of the Humanities Research Center at Duke Kunshan University. He is known worldwide as a scholar of Daoism, China’s indigenous religion, especially in relation to nature, environment and ecology. He has published three monographs and four edited volumes including China’s Green Religion: Daoism and the Quest for a Sustainable Future (Columbia University Press 2017).

Santiago Zabala is ICREA Research Professor and Director of the Vattimo Archive and Center at Universitat Pompeu Fabra. He studied philosophy at the University of Turin where in 2002 he obtained his M.A. (with a thesis under the supervision of Gianni Vattimo) and in 2006 his Ph.D. (summa cum laude) from the Pontifical Lateran University of Rome. In November 2007 he was awarded the Humboldt Research Fellowship by Germany’s Alexander von Humboldt Foundation for the years 2008/2009 at the University of Potsdam. He is also a visiting professor in Italy, USA, and other countries. Zabala is the author and editor of several books, essays and often writes opinion articles for The New York Times, The Guardian, and other newspapers