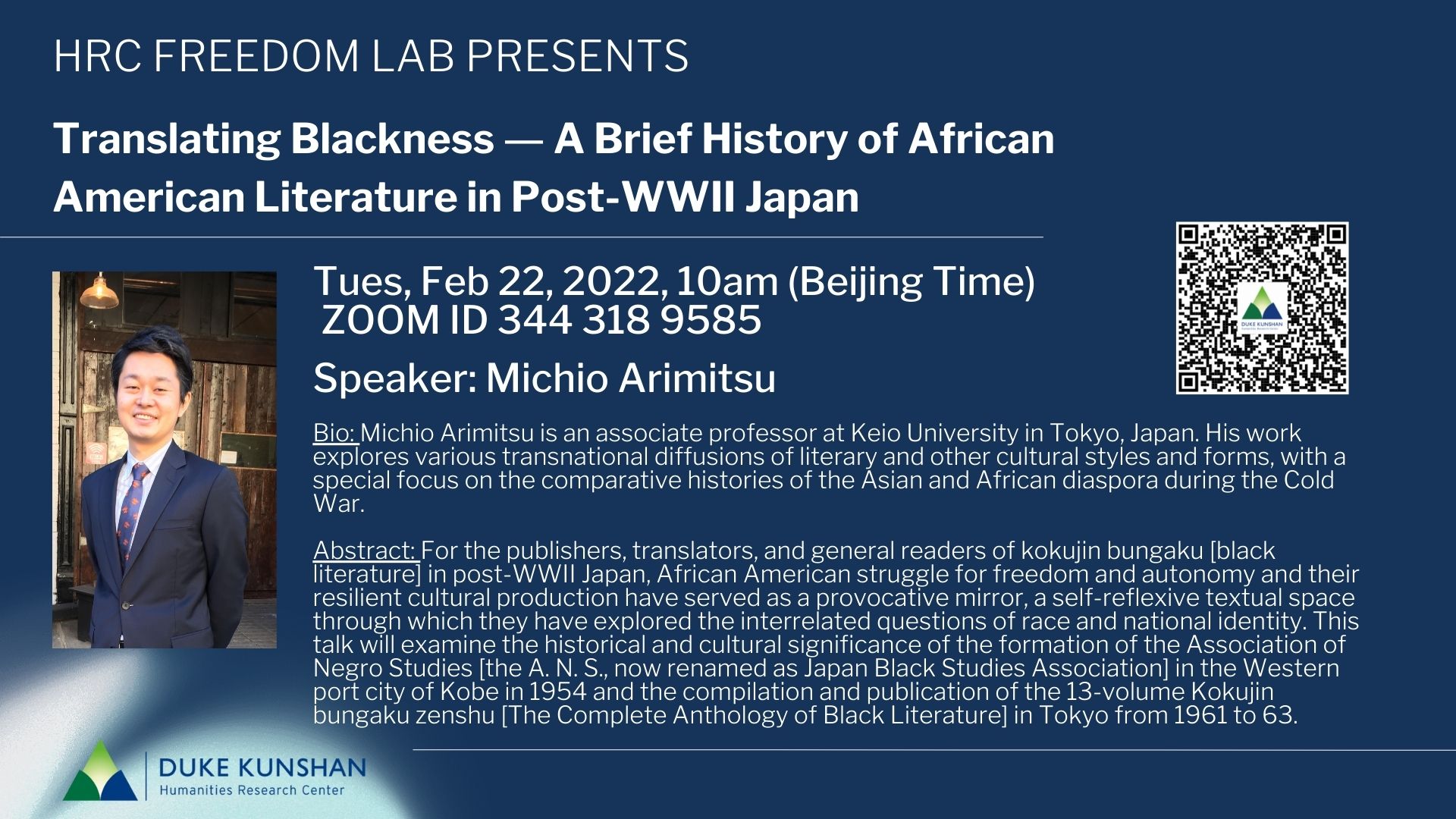 The A. N. S. and Kokujin bungaku zenshu together constructed a unique canon of African American literature in the aftermath of WWII, helping a surprising number of Japanese to grasp their relationship to Americans, whom they had implicitly racialized as a predominantly white nation. At the same time, African American literature also helped these Japanese to recognize and come to terms with the country’s ethnic minorities, particularly with the members of the ethnic Korean community. I will also talk about the Kokujin bungaku zenshu’s Korean translation, a project successfully undertaken by a former member of the A.N.S. By looking at how the figures of Blacks and Koreans are evoked together time and again by the creative translators and readers of kokujin bungaku, including Ōe Kenzaburō, a future winner of the Nobel prize for literature, this talk will examine the specific significance of blackness as it was conceived in all its complexity and diversity in post-WWII Japan.

Michio Arimitsu is an associate professor at Keio University in Tokyo, Japan. His work explores various transnational diffusions of literary and other cultural styles and forms, with a special focus on the comparative histories of the Asian and African diaspora during the Cold War. His publications, both in English and Japanese, have appeared in The Japanese Journal of American Studies, The African American Review, Contemporary Japan, Journal of Transnational American Studies, Eureka and on a program of the Museum of Modern Art (MoMA). His article, “De-Occidentalized ‘Projections in the Haiku Manner’: Poetics of Indeterminacy and Transcultural Reconfiguration of ‘Frog Perspectives’ in Richard Wright’s Last Poems” (2018), won the Saito Makoto Prize for best article published in The Japanese Journal of American Studies between 2016 and 2018. His recent book chapter (co-authored with Raphaël Lambert) in Global Ralph Ellison: Transnational Aesthetics and Politics beyond US Borders (Peter Lang, 2021) examines how African American literature became “visible” and relevant for readers and writers in Japan from the 1950s onward as it came to be defined as a front-runner of sekai bungaku [world literature]. He has also contributed a chapter to The Routledge Companion to Butoh Studies (2019), shedding light on the hitherto forgotten influence of the African American dancer/choreographer/anthropologist Katherine Dunham on ankoku butoh, an avant-garde performance created by Hijikata Tatsumi in post-WWII Japan. From 2019-22, he served as a co-chair of the International Committee of the ASA.