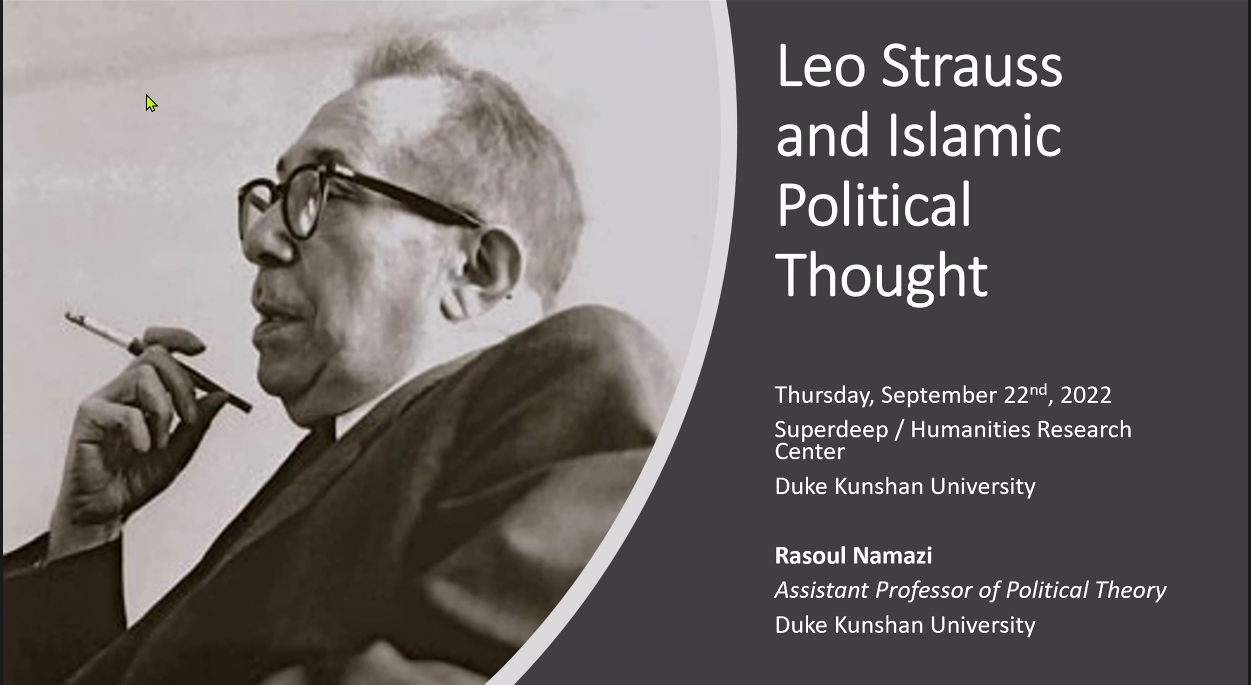 The host of tonight’s Superdeep session, Prof. Nathan Hauthaler started this Superdeep session with a warm welcome and introduction towards Prof. Namazi, an intelligent and broadly knowledgeable Iranian educated in France. Prof. Namazi delivered this session based on his recently published book: Leo Strauss and Islamic Political Thought. He started his talk with a brief biography of the German-American philosopher Leo Strauss (1899-1973). Prof. Namazi highlighted Strauss’ experience in training many students during his scholarship career, especially at the University of Chicago (1949-1969).

Prof. Namazi introduced Strauss as a controversial historian of philosophy and political thought. As he introduced, Strauss was renounced by his studies on ancient philosophers such as Plato and Aristotle, with also extinguished works on philosophers who gave birth to modern philosophy: Machiavelli and Hobbes. He was renounced for inviting political scientists to read the work of Plato and Aristotle’s classics.

“Most studies on Strauss concentrated on his work on Plato, Aristotle, and Machiavelli; while his work on Islamic political thoughts remains an understudied subject,” said Prof. Namazi. His works consist of numerous studies on Islamic philosophy, as shown in his notes. Reading One Thousand and One Nights, also known as The Arabian Nights, Strauss was writing notes solely for himself: notes like “1001 = 7 * 11 * 13;” Strauss tried to figure out what hidden information was included in those books. Another evidence suggesting his interest in Islamic philosophers is that he included two obscure Islamic philosophers’ names when writing his notable book History of Political Philosophy.

Focusing on the research gap above, Prof. Namazi wrote this book on how Strauss read The Arabian Nights and the Islamic philosopher Alfarabi. Prof. Namazi ended his presentation here, which was followed by a wonderful Q&A session.

The first question was: what does Prof. Namazi think are the most distinct differences between Strauss’s ideas to those previous philosophers he studies from?

His answer: trust in technology from modernity is a recent idea in the west, that the human race is to control nature to make them live better. Such thought is very different than pre-modern philosophers. Previous philosophers believed that humans had to accept the impossible. Strauss agreed with those pre-modern thoughts and was skeptical of the capability of technology. Strauss thought ancient philosophers were more realistic than modern ones, who are much too idealistic.

Another question was raised by Prof. Zairong Xiang, after a suggestion about Prof. Namazi’s word choice. Maybe philosophers need to stop using words like premodern, as there exists nothing “pre” in philosophy: the progress of philosophy is never linear; nothing has passed. Its progress is more of a continuation of thoughts. Prof. Namazi agreed that avoiding using pre-modern may be a way to understand the development of philosophy, while languages are looted in these kinds of words like “premodern,” and getting rid of them has been so difficult.

Another question raised was: One of the chapters in this book is called From Afarabi’s Plato to Strauss’ Afarabi. Is Strauss agreeing with Plato’s philosopher king?

One of the last questions was about how Prof. Namazi researched his book. How did he engage with those works? Prof. Namazi emphasized its difficulty. “Writing a commentary on a commentary is very difficult, as it requires understanding so much beyond the literature itself — Strauss disappears behind his commentary,” said Prof. Namazi.