Reported by Mateja Bokan, Class of 2026.

In this lecture titled Science and Empathy: Looking at China from the West in the early 20th century, Professor Prado-Fonts, an Associate Professor in the department of Arts and Humanities at the Universitat Oberta de Catalunya, explains the portrayal of China, its people, and its culture in the Western nations around the time of Picasso’s painting (1897) and developed in the first decades of the 20th century and into the interwar period.

The professor decided to split this lecture into two major parts: Science and Empathy, symbolic of this conference’s theme. He first explained the context of the period of which he is talking about by establishing that transmission of ideas between China and the West was slow, due to long travel times by land or sea. However, with the creation of the telegraph in 1880s, new types of journalism were formed, namely “quick journalism” through which media covered interesting events from the East in a manner promoting globalism without much nuance to the region. However, with the visits of people such as Albert Einstein and John Dewey, China was quickly placed into the forefront of Western interests and media. Within Spain, many national media such as La Correspondencia de España started to write about China on an almost daily basis; Chinese immigrants got involved with the local community, enriching the impact of Chinese culture in local communities.

From the perspective of empathy, Professor Prado-Fonts explained that during a time of Asian countries overtaking Western media, China tended to be the most popular among the readers. However, with Xenophobia and Sinophobia persistent, Western writers and researchers that travelled to China wanted to present the Country and its people in a more positive light; John Dewey, an American philosopher, said “I forget they are Chinese a great deal of a time” after one of his longer trips to China. In terms of Spain, the Spanish people grew especially fond of Chinese after some Chinese soldiers joined the International Brigades during the Spanish Civil War. Even though most of their soldiers came from France where many Chinese students were studying, the Spanish were fond of them for their bravery and tactics used in combat. Finally, more recently within the agenda of capitalism, China became an opportunity, however, likewise, many anti-Chinese movements came to be to make this process of cultural acceptance harder for the people. 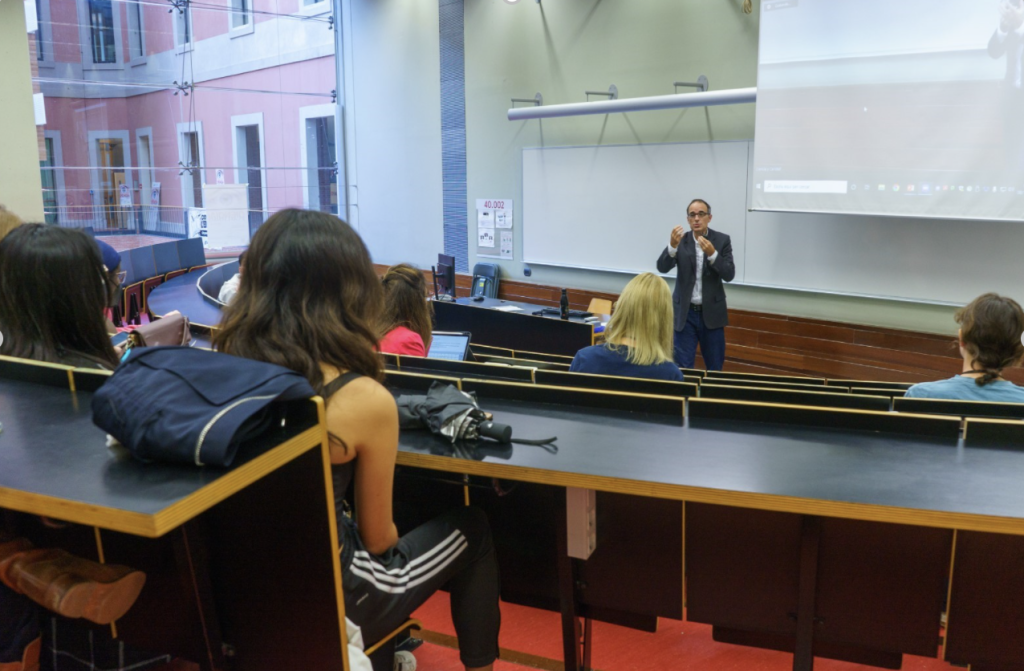 During the discussion, Professor Prado-Fonts was asked whether the yellow peril paranoia has been reawakened with the term “Chinese virus” relating to COVID-19, and how that may relate to the term “Spanish flu”. The professor explained that narratives are becoming less and less plural, yellow peril came to be after China lost the war to Japan but became a powerful symbol for all Sinophobic notions but is becoming more assertive and exuberant today. Another question was whether it is good to remove orientalism from our view of China and whether that is even possible? The professor said that it is extremely hard to separate the two, but there are some specific instances where it is possible to divide orientalism from China, and we have made that possible, however, it is our need to push into that direction further.

Following the lecture, the students were invited into smaller seminars, where Professor Prado-Fonts focused on the nuance of translation. The whole seminar focused on three ideas of translation, that is Translation connects but also disconnects, Translation beyond “translation”, and Triangle of translation (works about China have likely already been translated and now need to be translated into a new language). During the seminar, the students were invited to think of examples of when translation affected meaning and context of production of a piece of writing from the perspective of the three main ideas. Later, the professor influenced the students to consider different approaches to translation: linguistics versus philosophy, that is focus on the accuracy of language versus accuracy of cultural contexts in translation, and domestication and foreignization in translation, that is whether the translated piece will conform to the final reader’s culture or deliberately break the conventions of the target language to preserve the original meaning. To conclude the seminar, students were asked to think of different projects that could bridge the gap between translation and understanding and present them to the rest of the students.