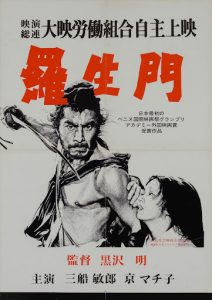 The Humanities Research Center is pleased to announce the launch of That’s Not How I Remember It: Rashomon at 70, organized by Dr. Richard M. Davis.

That’s Not How I Remember It is a one-night event celebrating Akira Kurosawa’s 1951 Rashomon, the film widely credited for “introducing Japanese cinema to the West.” This seventieth anniversary of its release, join us for a discussion of Rashomon’s outsized impact on global filmmaking norms and foreign perceptions of Japanese culture. That’s Not How I Remember It will involve a public screening of Rashomon (in Japanese with English subtitles), followed by a roundtable discussion with scholars from the United States and China.

Richard M. Davis is a Senior Lecturer of Cultural Studies at DKU. His work focuses on questions of aesthetics, ideology, and pleasure in various cinematic practices, such as the Japanese wartime film musical (1931-45), the subject of his in-progress monograph. He received his PhD in 2016 from the University of Chicago’s Joint Degree Program in East Asian Cinema and has previously taught at Singapore Management University and Tsinghua University in Beijing.