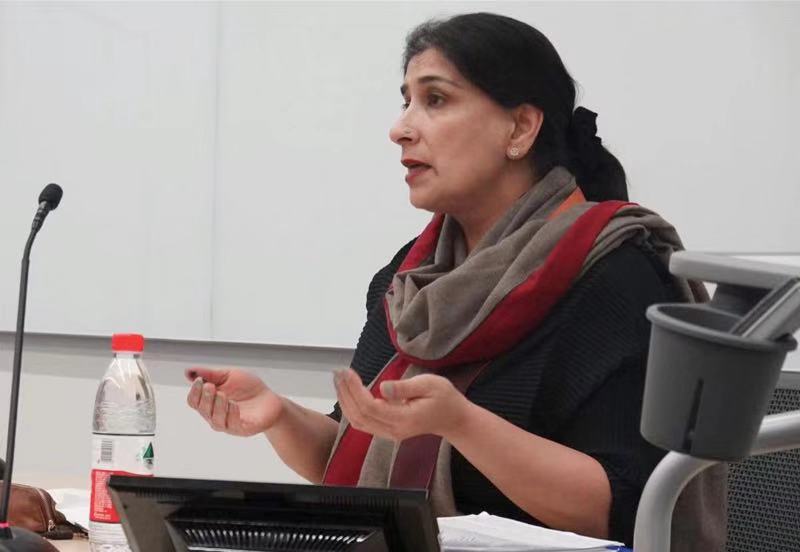 Facedown in the sand. The waves crashing relentlessly. The red t-shirt. Small, lifeless. Most of us are familiar with the image of Aylan Kurdi, a three-year old Syrian child whose body washed up in Turkey after the refugee boat he was in capsized. The unforgettable image of Aylan on the beach resulted in a record number of donations to charitable organizations aiding refugees and greater awareness for the crisis at hand. It is this crisis, the notion of death and speculation, and the value of such images which was discussed in the latest in the series of colloquia hosted by the DKU Humanities Research Center.

This student seminar saw Ranjana Khanna (Professor of English, Literature, and Gender, Sexuality and Feminist Studies; Director of the Franklin Humanities Institute, Duke University) hold a seminar meeting on her work in the fields of Psychoanalysis, Gender Studies, Feminist Theory and Postcolonialism and, more specifically, her recent journal article, Speculation; or, Living in the Face of the Intolerable.

Professor Khanna began the session asking all the students present to give a brief intro of themselves and their broad interests, immediately transitioning the seminar environment from a rigidly academic to a more comfortable one. During her lecture, Professor Khanna talked on a multitude of topics based on her interests, her works and the contemporary political and social environment. Khanna has written several books pertaining to fields of her expertise, the themes of which she briefly discussed during her lecture. In her book, Algeria Cuts: Women and Representation, 1830 to the Present she discusses the ways in which the members of the Islamic Salvation Front party involved in the Algerian civil war were seeking asylum in other countries. A bigger focus is on the figure of the Algerian woman, both under the hood of colonialism and under the post-colonialist time period, and the pursuit of feminism in the state.

In one of her other works Asylum: The Concept and the Practice she discusses the concept of asylum and its differing meanings. One, of course, refers to the mental asylum while the other is political asylum whereby individuals escape political persecution in the country where they currently reside and seek refuge elsewhere. Khanna examines the notions linking both these concepts. The first idea is the notion of hospitality, while another is the concept of dignity, indignity and shame- the idea of dignity as being either inherent to man or given. The third idea was value with regards to individuals. Khanna comes to the conclusion that dignity is a wholly inadequate term for the human, and thus, comes up with the concept of disposability, relating this concept to the dehumanization associated with asylums. The study of topics such as these is critical especially in the current global political environment, with the so-called refugee crisis in Europe.  Khanna is mostly interested in the relatively large number of refugees arriving in Europe, mostly focused on the south coast, crossing the Mediterranean. She terms this event a ‘so-called’ crisis because according to her, it warrants being called that. She states that the numbers of refugees in refugee camps or individuals seeking asylum in other parts of the world is much greater than number of people moving into Europe. Khanna specifically cites the India-Pakistan migration resulting from the partition of the subcontinent as an event which deserves to be termed as a refugee crisis. It is this examination of the refugee crisis which brings the seminar to its main discussion: Khanna’s recent journal article.

Through her article, Khanna hopes to provide an examination of the term “Speculation,” subsequently linking it to the notion of death. In his essay “Thoughts for the Time on War and Death,” Sigmund Freud, referring to Aristotle’s De Anima, writes of the “picture of death” becoming the starting point of all speculation. Khanna, writing in tribute to Miriam Cooke’s work, examines the work done by the image of corpses. For this purpose, she turns to both Aristotle and Freud. Aristotle understands the root of all speculation to be primeval man’s relationship to the corpse. On the other hand, Freud’s essay, written in order to convey his sense of disillusionment after World War I asks the readers to recall the old saying, Si vis pacem, para bellum: If you want to preserve peace, arm for war. According to Khanna, Freud asks us to turn to the arts for an education in how to live, and thus, how to speculate, in the face of the intolerable.

Keeping in line with the study of speculation and the images of the corpse, Khanna became interested in the prevalence and the purpose of photographs of the refugee crisis in the newspapers. In other words, how do you invoke emotions, and create an environment in which populations are open and closed to the incoming of a mass of people? And thus, we are brought back to the image of Aylan Kurdi. Khanna reveals that the infamous image was actually modified in order to ‘sanitize’ it and remove all other bodies, consequently forcing the audience to focus only on the fallen child, thereby evoking a greater degree of sympathy and recognition from the global community. Khanna aims to uncover the value of this image, given the clear disposability of most human lives. In the end, she merely wants us, the audience, to understand speculation, not as a means of exchange, production, consumption or biology, but beyond it. As an oscillation between life and death, as living in the face of the intolerable.