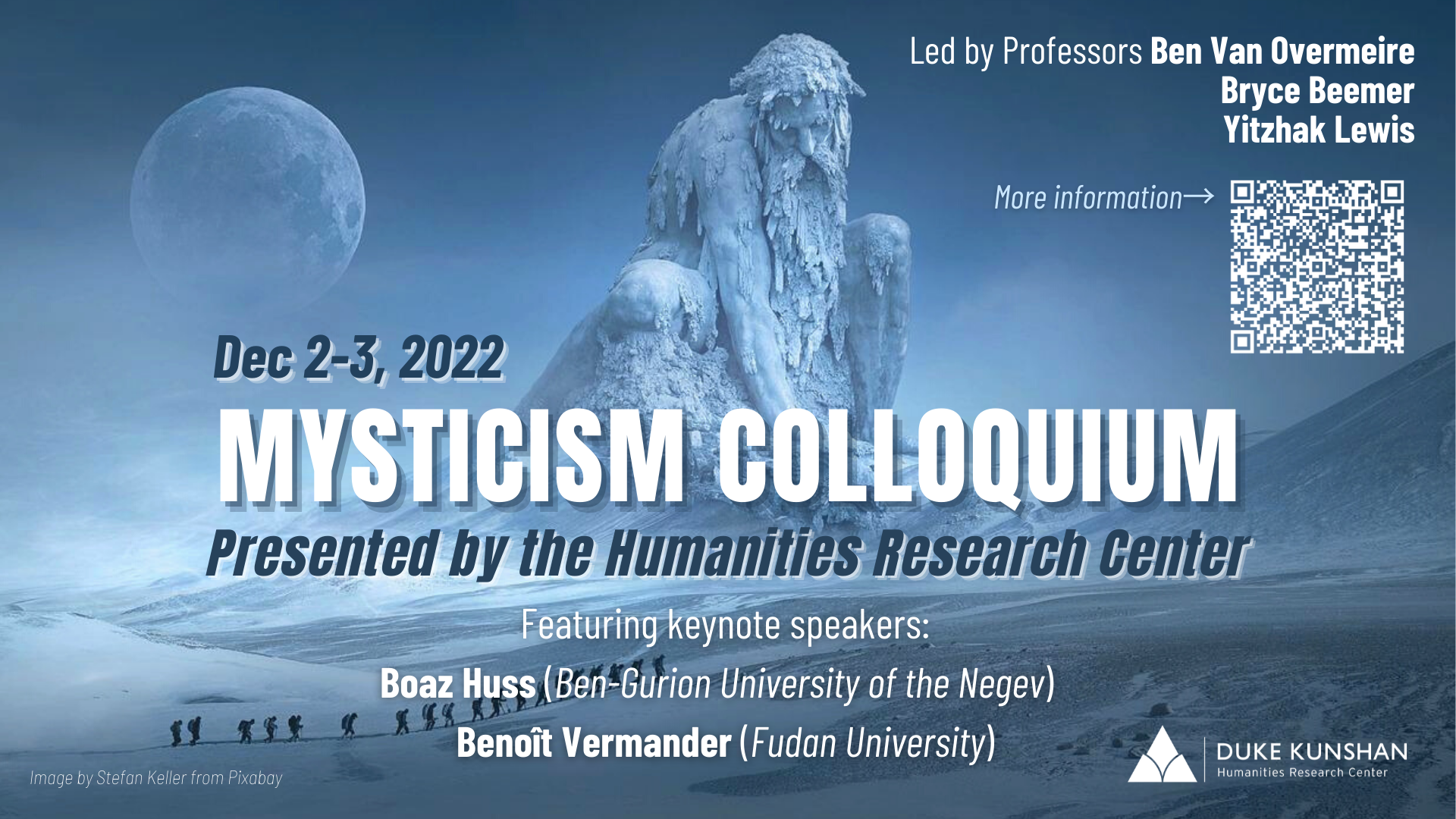 *Recordings for this event is now available. Please scroll down to the program below.

In Orientalism and Religion, Richard King provides a genealogy of the term “mysticism,” arguing that this term is both “socially constructed” and “the conceptual site of a historical struggle for power and authority” (9). The label of “mysticism” has been applied to many practices and movements (religious or not) across many social and historical contexts. However, the term itself acquires its coherence not from the cumulation of disparate phenomena it has been appended to but from the very particular historical context in and through which it is articulated as a modern academic category. We aim to examine both the historical contexts in which the term mysticism has been deployed, and also examine whether the term “mysticism” is conceptually useful in pursuing scholarship on religion. Papers will discuss both the general usage of the term mysticism (“what does it mean?”) and specific case studies of mysticism as it manifests in religious practice, literature, behavior, ritual, and otherwise.

Unless otherwise indicated, all events will take place on campus in AB 1079.

In the mid-eighteenth to mid-nineteenth centuries, large-scale slave-gathering warfare reshuffled the populations of mainland Southeast Asia. In this under populated region, people were power and warfare was often dedicated to the capture and relocation of rival population centers. Beginning in 1752, the expansionary Konbaung dynasty in upper Burma sacked and depopulated numerous neighbors; most significant amongst these were the kingdoms of Ayutthaya in 1767 (located in modern central Thailand), Arakan in 1784 (an independent kingdom on Burma’s western coast, now a state in Myanmar), and Manipur (now a state in northeast India), attacked numerous times but finally depopulated between 1819 and 1826.

My research is devoted to the cultural consequences slave gathering warfare and the profound effects that it had on both the societies that integrated captured peoples and on the captured people themselves. This presentation will consider the spirit mediumship and ritual practices in communities of Manipuri slave descendants in modern day Myanmar. These mystical practices can be read as compelling historical source materials that describe complex, and contradictory processes of assimilation and maintenance of outsider identities, or alterity, among the descendants of war captives, a process I describe as Southeast Asian creolization in in the larger scope of my research.

Since at least the publication of William James’ The Varieties of Religious Experience (1902), the modern concept of mysticism has been inextricably tied up with a particular notion of mystical experience, understood as a phenomenon which is typically individual, episodic, immediate, ineffable, noetic, and – above all – passive. This notion has been taken up by contemporary analytic philosophers of religion, usually to provide data for so-called “arguments from experience” for the existence of God, while neglecting other more central aspects of mysticism and mystical traditions. In this talk, I want to argue that the way these experiences have been treated in much of the philosophical literature often completely obscures the fundamentally practical, social, and diachronic aspects of many mystical texts and traditions.

I will begin by complicating both the terms ‘mysticism’ and ‘experience’, and I will attempt to show the ways in which particular mystical figures proceed from, operate within, and push toward a variety of experiential forms in their pursuit of the individual and social religious life. I will then draw on the work of Dorothee Sölle, José Medina, and a variety of medieval and early modern mystical thinkers to show some ways in which the experiential aspects of mysticism – understood as necessarily embedded in a larger practical and social framework – can serve as a resource for collective activity, social resistance, and theological reform. I will conclude with some thoughts on how one understanding of the so-called “mystical journey” can be a tool and an inspiration for resistance, solidarity, and activism in the present day.

The term Jewish Mysticism, and the identification of Kabbalah, Hassidism, and a few other Jewish texts and movements, as Jewish expressions of a universal mystical phenomenon, which first appeared in the early 19th century, is largely accepted today, both by scholars and by the larger public.

In my lecture, I would like to present the main arguments of my recent book, Mystifying Kabbalah, in which I historicize and problematize the category “Jewish Mysticism” and the identification of Kabbalah and Hassidism as Jewish expressions of a universal mystical religious phenomenon. The two main questions that I will address in the lecture are, first, how did the term “Jewish mysticism”, that appeared for the first time in the writing of Christian theologians in the early 19th century, became the main concept, according to which Kabbala and Hasidism are branded, researched, interpreted, and in some cases, practiced.  Second, how did the conceptualization of Kabbalah and Hasidism as Jewish mysticism direct, shape – but also limit – the way Kabbalah and Hasidism are studied in the Academia.

Penelope Lai: Tarot Reading and Intimacy: What do we seek when we draw a card?

This is a case study of audiences of Tarot reading videos on Chinese social media, such as Xiaohongshu, Bilibili, and Weibo. Topics of Tarot reading videos are generally focusing on romantic relationships, love life, and crush. Audiences can interact with their answers by clicking on the corresponding option. Many audiences will share the correlation between their current intimate relationship status and the drawn cards in the comment section. However, others do not consider the drawn cards to be explanatory to them and therefore keep clicking into new videos, eager to seek some degree of confirmation and empathy. This case study will explore and discuss the relationship between this type of Internet-based mysticism practice and intimacy through semi-structured interviews with audiences recruited from social media platforms.

Yitzhak Lewis: Nachman of Braslav and the Vacant Space of the World: exploring mystical images of secularization processes

Nachman of Braslav (1772-1810) lived through many of the most consequential upheavals of modern times. To some extent, the intellectual, social, even literary sense of “modernity” was shaped during his lifetime. In his writings, Nachman comments on these changes through the mystical language and symbolism of the Kabbalah. The most productive mystical image, through which he discusses the social and intellectual developments of his day is the primordial Withdrawal of divinity. The emptying of the Vacant Space, within which the world was created. What implications does this cosmogonic myth have for understanding the world of early nineteenth century secularization processes? What social and intellectual insights can be drawn from such theological imagery about the contemporary world of enlightenment, rationalism, and secularization? Reading through one of Nachman’s most notable mystical teachings on the topic of the Vacant Space, we will explore the connection between mysticism and modernity, religion, enlightenment, and secularization.

For decades, academics have used works written by Sufi scholar Shaykh Musa Kamara (1864-1945) from colonial Senegal to establish facts. His prolific output, including works of history, custom, and Islamic law was mined for useful data about the West African past, the region’s cultures, and its religious specificity. Alongside this data, historians have represented Kamara as a rationalist and sober man of letters, cohering with an image of him held by colonial interlocutors who solicited Kamara’s writings. Since 2013, a more ambiguous discourse has emerged within Senegal: an esoteric Kamara who performed saintly miracles coincides with the rationalist source of history. What makes these new readings of Kamara possible now? How does the attention to the esoteric in Kamara change the reception of his work? This paper pursues these questions.

Christian mysticism can be associated with the doctrine of divine kenosis, God’s self-emptying into the world, and the Christian practitioner’s radical self-emptying and openness toward God. This doctrine is of interest not only to Christian mystical practitioners, but also has implications for society and politics. The contemporary Italian philosopher Gianni Vattimo makes the claim that this “negative” doctrine of kenosis has led to the “positive” secularization that has occurred in Europe and the West over the past centuries. Vattimo argues that this reading of Christianity rejects a “grand narrative” of secularization, progress and modernity, in favor of a “weak belief,” or a “belief in belief,” predicated on a “weak ontology.” This paper compares Vattimo’s discussion of kenosis with a Daoist ontology based on primoridal nonbeing (wu 无) and considers its implications for secularization in China and the West.

Religious individuals in China face long-standing prejudices about the nature of religion, such the idea that it is superstitious, unscientific, irrational, or backwards.  Drawing on ethnography at Buddhist and Protestant organizations and in-depth interviews with Buddhist, Protestant, and non-religious educated professionals in a wealthy coastal city in China, this paper shows that as Chinese educated professionals convert to religion, they navigate these prejudices by “de-mystifying” religion.  Although they may privately admit to experiences that might popularly be regarded as superstitious and that scholars might put under the category of mysticism, their public narrative emphasizes the rational and scientific nature of their chosen religion.  In this way, they make their religious engagement legible for a skeptical public and work to retain their status as modern, cultured, high-quality members of society.  However, in doing so they are also reflecting and reinforcing the state’s rhetoric on the appropriate forms and location of religion.

Space opera, examples of which include the Star Wars and Star Trek series, is the most popular yet least studied subgenre of science fiction. Often, it is thought that such narratives are of inferior literary quality and contain little of interest to the serious scholar. In this paper, I use examples from the space opera series Murderbot and The Expanse to show that contemporary space opera provides a very interesting departure point to imagine changes in the mystical imagination during the space age. After sketching some background on the recent resurgence of space opera as a genre, together with an overview of scholarship on “astroculture,” I elaborate the argument that contemporary space opera engages deeply with the question of the non-dual self, portraying experiences that can be called mystical. On the one hand, there is a deep fear of such experiences, which imply the loss of the neoliberal individual (as portrayed with the Borg in Star Trek or the alien civilization in The Expanse). On the other, there is rejoicing in this loss (for example in Murderbot or Ancillary Justice). I prove this by providing a narratological analysis of these novels and by examining its usage (or absence of) gender patterns or even “human” characters. Outer space thus becomes the scene for the dissolution of the autonomous individual.

Jean Gerson (1363-1429) has played a decisive role in establishing spiritual theology as an experimental science, the foundation and process of which are independent from the ones of dogmatic theology, even if their results need to eventually coincide. Based, as all Western works in the field, on Pseudo-Dionysius, Gerson’s De theologia mystica (written between 1402 and 1423) developed an epistemology of mystical knowledge, itself grounded upon an anthropology describing how humankind’s cognitive and affective powers operate together. Gerson’s work played a major role in the development of modern approach to mysticism. In this talk, I will compare this work to the Chinese tradition of Xuanxue, insisting on both cases on what it means to “experience” what is beyond or behind empirical knowledge.