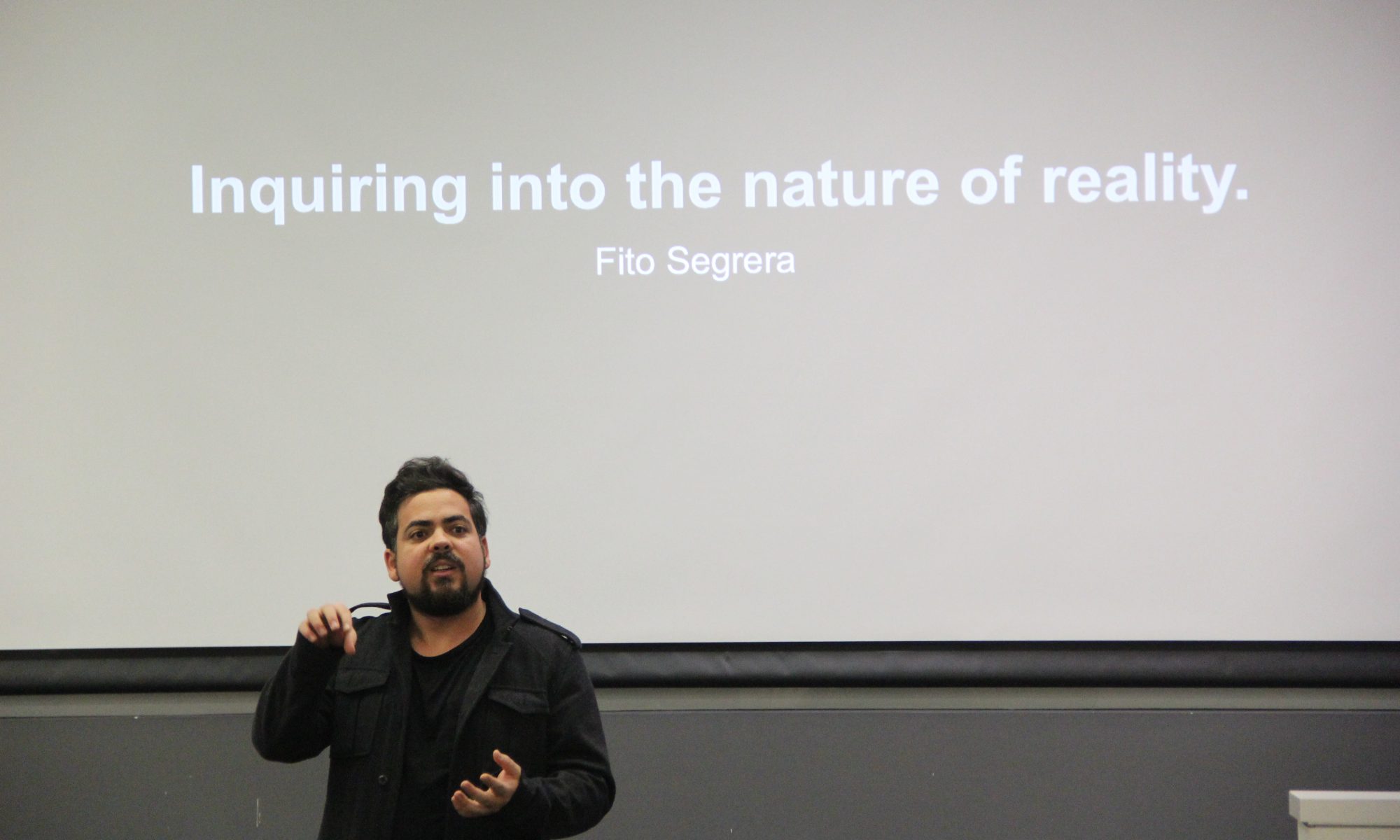 In a world where a deep fear of incumbent malice and malevolence runs within the hearts of most who have pondered the rapid pace of development in artificial intelligence, Fito Segrera sees a possibility for an exceedingly more positive future with benevolent AI. With a practical sense of optimism, he has considered a future with AI that might guide our way to better decision-making, ultimately resulting in an ending that doesn’t result in the destruction of humanity with the rise of AI.

With custom software that attempts to recognize not just inanimate objects but breaches into the world of human emotion, Fito has reinterpreted Dziga Vertov’s experimental documentary film A Man With a Movie Camera (1929), a masterpiece in its own right. Kino Eye Recursion brings us a series of captions in human-like language, words that the software considers adequately describes frames from the movie as. People at DKU were able to enjoy the film in a way it has never been presented before – with Kino Eye Recursion and A Man With a Movie Camera on loop in two opposite ends of the room, completely out of sync. A deliberate decision to allow the audience to make what it will of both the films, it pushed everyone in attendance to consider more profoundly the working of the software and the broader situations it foreshadowed of AI being able to recognize and codify human behavior and emotions.

On a black screen, captions without context, these words could be from anywhere. As something that is supposed to work like the human mind to the greatest extent possible in it’s codification of visual data, the software comes uncannily close in recognizing human emotions, which statements attempting to describe emotional states as ‘humanly’ as possible- “A woman taking a picture, she seems to be sad.” Some of these are a long way from what the image is actually supposed to be. But Fito believes that is where the art lies- when something that has been programmed to be as accurate as possible makes the most unanticipated of errors.

Just as intriguing as the movie, the talk that followed the next day left most of us baffled in the best way possible- with an introduction to a delightfully unexpected realm of art that most of us don’t know enough about, brought us to contemplate questions broaching the subject of existence and reality itself. In SER_ONLINE, a documentary screencaptured completely in the interface of the online RPG SecondLife, he explores how an online platform can be exploited to present a hyperbolic representation of stereotypes of an entire population. Trooping through the surreal island of Colombiamor, Fito’s avatar interviews multiple players in real time, and he slowly unveils how avatars can be a way of subverting repression forced on individuals due to social standards—whether through vicariously experiencing body modification of your virtual persona or living a life imbibed in drunken revelries.

With this introduction of how the online world can be used as a way of subversively distorting reality to the point where you can’t tell what is the truth anymore, we were taken to METAGENESIS, where Fito takes the viewer on a journey of experiencing how abstractions morph into representations. As pixels slowly turned into recognizable giraffes and galaxies, Fito explained how the virtual world can be used to understand reality. Is what we understand as reality truly objective? Fito is of the belief that we can never truly know.

In Datasphere 1.0, the project I found to be the most intriguing, Fito steps into the domain of the collective consciousness, attempting to recreate it through a brain-computer-interface that classified emotional responses to what he was seeing in an area rife with abject poverty. The interface then picked up tweets containing the relevant keywords from all over—a collective response to what the individual experiences. Let that sink in for a bit—an electroencephalogram that can be programmed to codify not just your emotions, but pool in bigger data that represents your emotional state from people all over the world, in real time. What we viewed was but a mere glimpse into a 7 day long documentary, where one can only imagine what emotional states he experienced and the responses his creation elicited.

This scintillating experience brought me to question if one day, AI can be programmed well enough to produce paintings and other works of art that are as innately human as some of the pieces we consider to be central to representing humanity, such as van Gogh’s The Potato Eaters.  Fito’s numerous works show that AI has gradually come to the point where it can at least attempt to distinguish human emotions, and given such advances he thinks that there will certainly be a day when AI can imitate this quality and creativity we take for granted as human to produce its own work.

Slowly but surely, Fito has taken the seemingly distant realms of AI and art to bring them together in a culmination that begins to sum up the advances in technology we are making. While it marks a period of unimaginable growth, there are also myriad challenges as we are brought to question the very essence of humanity and reality. But, as Fito says, this shouldn’t bring us chagrin, for who knows if this is just a step towards brightness in the future, away from our bleak and dreary present? Why cower in fear that we project from ourselves when there is so much growth to be had?