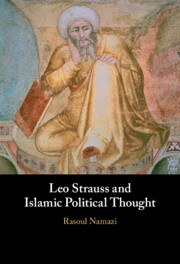 Description: “In this book, Rasoul Namazi offers the first in-depth study of Leo Strauss’ writings on Islamic political thought, a topic that interested Strauss over the course of his career. Namazi’s volume focuses on several important studies by Strauss on Islamic thought. He critically analyzes Strauss’s notes on Averroes’ commentary on Plato’s Republic and also proposes an interpretation of Strauss’ theologico-political notes on the Arabian Nights. Namazi also interprets Strauss’ essay on Alfarabi’s enigmatic treatise, The Philosophy of Plato and provides a detailed commentary on his complex essay devoted to Alfarabi’s summary of Plato’s Laws. Based on previously unpublished material from Strauss’ papers, Namazi’s volume provides new insights into Strauss’ reflections on religion, philosophy, and politics, and their relationship to wisdom, persecution, divine law, and unbelief in the works of key Muslim thinkers. His work presents Strauss as one of the most innovative historians and scholars of Islamic thought.”

The book is available on different platforms including Amazon but if ordered from the Cambridge website, one can get 20% off by entering the code NAMAZI22 at the checkout.

Learn more about the book directly from the author:

Could you tell us about your new book and what inspired you to write it?

This book is the result of a four-year-long research project which took me first to the University of Chicago and then to Munich. While in Chicago, I discovered new unpublished manuscripts by Leo Strauss, the German-American political philosopher (1899-1973) whose papers are kept at the University of Chicago. Although Strauss is now recognized as being one of the most innovative historians of Western political thought, he remains mostly unknown among scholars of Islamic political thought. The idea was therefore shaped to pursue a comprehensive study on Strauss and Islamic thought based on his published works and two major discoveries that I made. My objective in this book has been to cover all the major aspects of Strauss’s engagement with Islamic political thought from beginning to end and also to introduce Strauss to a new audience, namely fellow scholars of Islam who might be unfamiliar with Strauss’s writings. The book begins with a chapter on Strauss’s interest in Islamic political thought from his time in Europe until his later years in the United States. Strauss was of Jewish background and had to flee Nazi Germany and spend years in France and England before coming to the US. During this period he was in contact with many of the major scholars of Islamic thought and published several studies on Islamic political philosophy, mainly on the most important Muslim political philosopher Alfarabi and studied his impact on Jewish thinkers like Maimonides. In the remaining chapters of the book, I discuss, in detail, Strauss’s writings on Alfarabi and introduce Strauss’s interpretation of the famous work of Arabic literature, the Thousand and One Nights, also called the Arabian Nights, and his notes on another major Islamic philosopher, Ibn Rushd or Averroes. These two chapters are based on the manuscripts that I discovered in Chicago and are introduced for the first time to general readers.

What is something you learned in the process of writing this book?

Writing even a short paper is an opportunity to learn new things, but books, especially longer books like mine take you through a complex process after which you are not the same scholar. Most of my book is built around manuscripts of a very peculiar kind. Let me concentrate on Strauss’s manuscript on the Arabian Nights. This manuscript is not a composed text but rather eighteen pages of dense notes in shorthand written for the benefit of Strauss himself. They were not supposed to be read by others, therefore everything is like a puzzle. Interpreting this manuscript presupposes a considerable familiarity with the Arabian Nights, Strauss’s diverse writings, and many other authors because otherwise, one wouldn’t know what a specific allusion refers to. In many cases, Strauss is comparing the ideas in the Arabian Nights with the Bible, the writings of Plato, Xenophon, or Machiavelli and if one doesn’t know those texts closely enough, one wouldn’t understand the intention behind Strauss’s notes. The book, therefore, made me constantly go back and forth between Strauss’s notes and many classics of political thought. The other benefit of working on this book project was coming in contact with and collaborating with scholars based in different countries. While in Chicago I got to know scholars working at and visiting the University of Chicago. My two-year fellowship in Munich during which I continued working on my book also provided me with many new opportunities. Alexander von Humboldt fellowships are highly competitive and are awarded to a select few scholars and scientists from all over the world to come to Germany to work on a research project together with collaborative partners. This was another opportunity to get in touch with other prominent scholars. I now am an alumnus of the Humboldt Foundation and receive lifetime support from the foundation to work on my own projects and even to sponsor guest visits by academics from Germany to my institution, i.e. DKU. In a word, my work on this book provided me with a large network of scholars with whom I am now working on new projects.

What made you interested in studying Islamic and Western political thought?

I was born in Iran and in a sense, the study of Islamic political thought comes naturally to me. Even my interest in working on this book was partly due to my fascination with Arabian Nights since my youth. Interpreting Strauss’s notes on the Arabian Nights was a way of returning to my passion for this classic work. As for my research orientation, in general, I believe our understanding of Western and non-Western thought improves considerably with a comparative perspective. This is why my academic work began with studies on John Locke and Machiavelli and I have made a comparative study of Western and Islamic political thought the focus of my research. At the center of my book is therefore a comparative perspective on the study of Muslim philosophers like Alfarabi and Averroes, the perspective that I am applying to my current research projects as well.

What are your next projects?

I am currently working on two projects: 1) A book-length project on early Islamic political thought tentatively titled “Divine Kingship and the Law: A Study on Early Islamic Political Theology.” The short version of one of the chapters of this book is already forthcoming in a collective volume and another chapter is under review by a journal. 2) Co-editing a volume of six new manuscripts by Strauss mainly on religious questions along with twelve interpretative commentaries written by major scholars on those manuscripts. It is an ambitious project, bringing together new discoveries and the scholarship of researchers from around the world. The book is invited by SUNY University Press and is titled “Leo Strauss on Religion: Texts and Interpretations.”