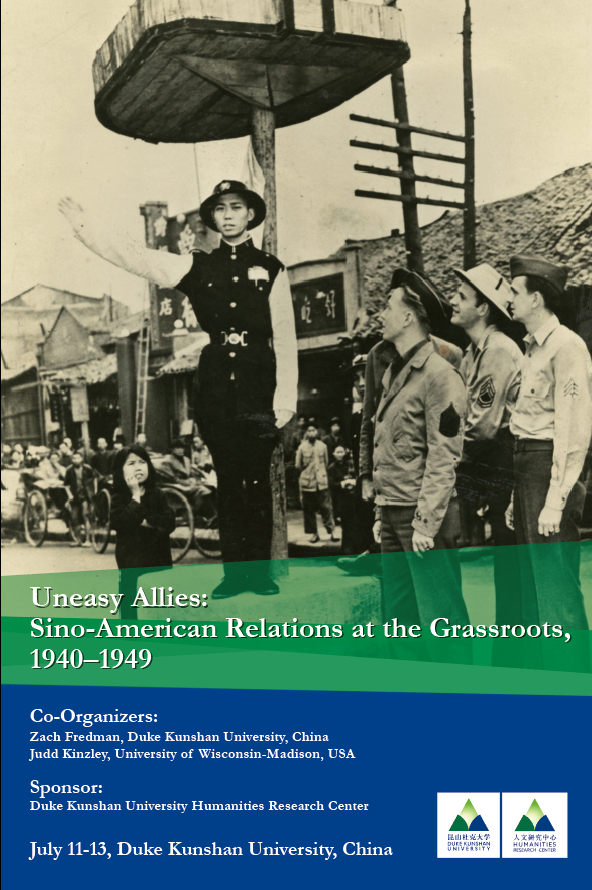 The largest sustained engagement between Americans and Chinese that ever occurred in China took place during the 1940s. During this period, individual American and Chinese soldiers, scientists, nurses, and truck drivers, among many others, came together to collaborate in the fight against Japan. These interactions had a resonating impact: shaping popular perceptions of China and the United States, impacting the development of new and powerful institutions, and creating new markets and demands that would transform both countries and indeed much of East Asia. Yet, we know surprisingly little about these important grassroots interactions between Americans and Chinese. This conference, Sino-American Relations at the Grassroots, is an attempt to shine a direct light on the interactions between Americans and Chinese at all levels of the socio-economic spectrum in the 1940s. Focusing on grassroots perspectives rather than elite politics enables us to explore a wide range of Sino-American encounters during this period, from interaction between ordinary American servicemen and Chinese civilians to the trans-Pacific material exchange of American industrial goods for Chinese raw materials. Other themes include transnational disease control, intelligence and scientific collaboration, educational exchange, and the subjective experience of war. In addition to discussing current research, we plan to outline a framework for further study on the 1940s.

Li Wankun, Ph.D. candidate at the School of History, University of Leeds.

*All events in Room 1095, Conference Center, Duke Kunshan University except where noted.

Linh Vu, “Corporeal Sovereignty: Bones, Burials, and the Biopolitics of the Sino-American Alliance.

Zheng Yanqiu, “Effective in a Small Wat: The China Institute in American and the Student Turn in Sino-U.S. Relations in the 1940s.”

Li Wankun, “Chinese Oil and the Global War: The Transformation of the Wartime Economy to the Planned Economy in Chongqing, 1937–1953.”

Zhang Ruisheng, “Cultivating Red China’s Agricultural Engineers: Research on the Cooperation between the Ministry of Agriculture and Forestry and the International Harvester Company.”