Reported by Pauline Rogers, Class of 2025. 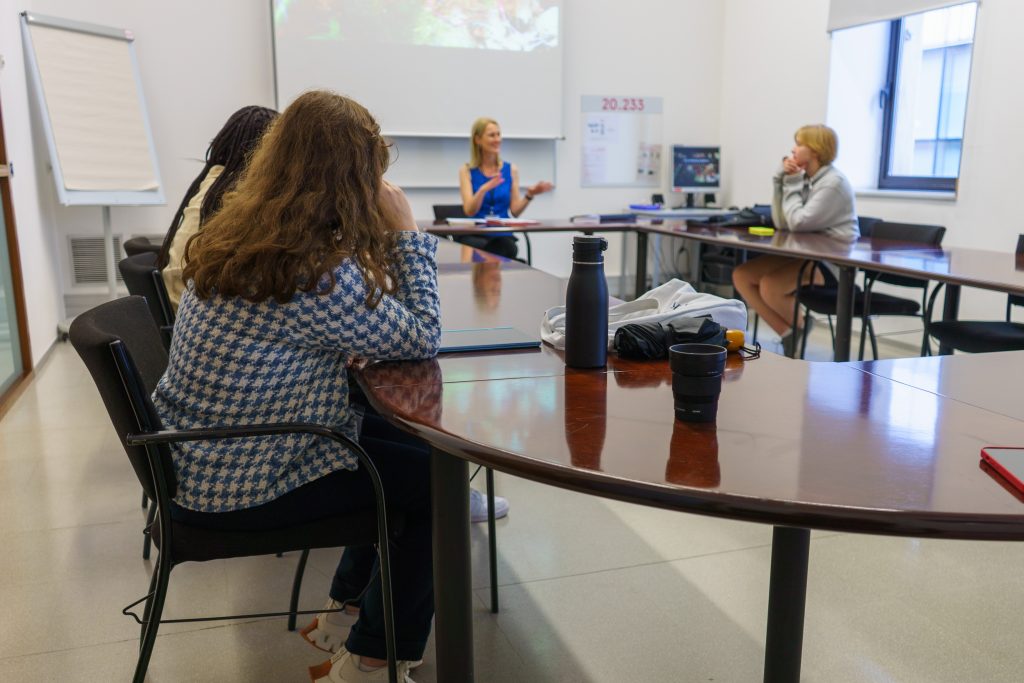 Professor Page’s seminar focused on the theme of Art-Science Projects. Before arriving at the seminar, participants were expected to read the introduction of her book Decolonizing Science in Latin American Art.

She begins by asking us a question that we split into groups and discuss. “What are the differences between art and science?” Differences that we are asked to focus on include their objectives, methods of communication, what is valued, standard of what makes it good, and spaces in which they operate.  END_OF_DOCUMENT_TOKEN_TO_BE_REPLACED

Reported by Dongkun Lyu, Class of 2025 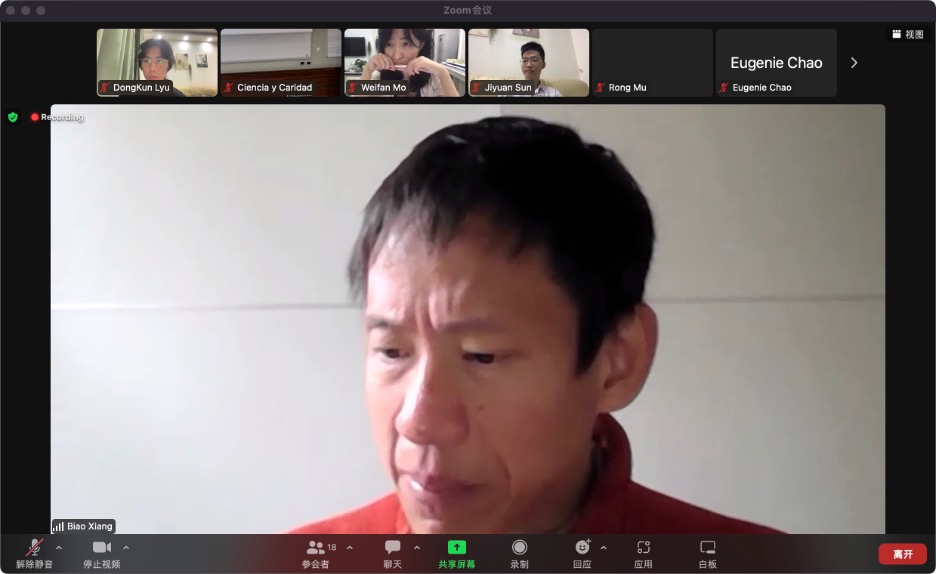 This is a hybrid keynote lecture as a part of 2022 Humanities Fall Conference: Ciencia y Caridad.

Duke Kunshan University’s Humanities Research Center invited Professor Biao Xiang who is one of China’s foremost social anthropologists to deliver a lecture on Oct 8, regarding his recent research . He is currently conducting research at the Max Planck Institute in Germany and was only able to participate in the HRC’s Ciencia y Caridad Fall Conference via zoom. END_OF_DOCUMENT_TOKEN_TO_BE_REPLACED

Reported by Dongkun Lyu, Class of 2025

This is a hybrid keynote lecture as a part of 2022 Humanities Fall Conference: Ciencia y Caridad.

Duke Kunshan University’s Humanities Research Center invited Professor Biao Xiang who is one of China’s foremost social anthropologists to deliver a lecture on Oct 8, regarding his recent research . He is currently conducting research at the Max Planck Institute in Germany and was only able to participate in the HRC’s Ciencia y Caridad Fall Conference via zoom.

Xiang formulated the existence of a  popular worldview in China called “Brutal Moralism.” It is the idea that brutality is a sign of authenticity, and it is an idea that is accepted by a sizable section of the Chinese population, regardless of their socioeconomic background since 2008. Xiang makes a distinction between morality and moralism. He asserts that “Morality is about principles that guide one’s conduct; moralism is about judging others in a black and white manner”.

He points out that Brutal Moralism has two characteristics, I) it is widely accepted emotionally; II) there is a justification for it. One reason for these characteristics is the self-identification of the victims which emotionally transforms into hatred. Another reason is that brutal moralism justifies some traditionally immoral behavior. This was especially seen in the discussion of the Russo-Ukrainian war in online public forums. “Violence can be celebrated as heroic; traditional moral values such as respect for life can be belittled as hypocrisy.” Brutality as a sign of authenticity was legitimated by Moralistic claims.

The value of human life counts for little in this moralistic worldview. This Brutal Moralism influences people’s worldviews both on the international  and individual level.

After the lecture, Professor Xiang opened the floor to observations and questions, and he proceeded to answer all questions at once. The lecture ended with Professor Xiang’s summary response, and he hoped to continue the discussion into the student seminar.

Professor Xiang carried out a student seminar by the means of an anthropological dialogue. Student were invited to present their empirical experiences, perceptions, and hypotheses related to the issues raised in the lecture.

Q: Thank you to Prof. Xiang for the great lecture, I have a question about the role of historical narratives or national shame education which in late the 20th century, which the Chinese government turned to in order to emphasize  cases like the Nanjing massacre. This then justifies the 落后就会挨打”If you fall behind, you will be beaten” principle. It’s a justification of violence, of competition between individuals, justifying moralistic brutality. Individuals who grow up under this sort of education will tend to appeal to the authorities, and perhaps worship it.

Xiang endorsed this hypothesis and admitted there may be several historical reasons for these worldviews. He also hoped the students could present more on their perceptions of this.

In the later seminar, students presented and raised their empirical experiences and questions such as “the conflict between political legitimacy and brutal moralism,” “daily lives in Shanghai during pandemic” and “Internet opinion”.

Xiang also discussed how to translate “戾气” and “无力感” which are words he thinks of as accurate symbols of the younger Chinese generations. The group decided on “戾气” as “toxic gas” and “无力感”as “sense of powerlessness”.

Before the lecture, Professor Xiang was conducting anthropological interviews, asking about the actual situation of the epidemic in Shanghai.

This research talk is part of the Third Space Lab Brown Bag Lunch Research Talk presented by the Humanities Research Center. The program is broadly associated with research projects related to languages, cultures, and intercultural communication.

Joseph Davies is a senior lecturer of English language and assistant director for graduate English for Academic Purposes at Duke Kunshan University, China. During a research talk on October 28th, 2022, Prof Davies introduced his research on feedback literacy among L2 learning students. Based on the fact that students and teachers are generally dissatisfied with the feedback practice, he explored ways of improving the situation in a productive manner. END_OF_DOCUMENT_TOKEN_TO_BE_REPLACED

To conclude the Humanities Research Center’s Ciencia y Caridad Fall Conference, the Co-Directors of the HRC, Carlos Rojas and James Miller, held a roundtable panel discussion with the faculty guests and attendees of the conference.

Prof. Rojas briefly summarized each event and lecture from the past two days, and provided his own comments on the research of the guests.

Starting with Prof. Duran’s and Prof. Page’s lectures, Prof. Rojas connected the two topics with the concept of ‘seeing’. Prof. Duran’s presentation on the medical humanities and gender in the works of Philip Roth and Sussana Kaysen included a scene from the movie “Elegy”, directed by Isabel Coixet, in which a woman’s male lover takes a picture of her to allow her to see herself through his eyes. ‘Seeing’ was also connected with Prof. Page’s presentation that highlighted different epistemologies in the environmental sciences, which is essentially an exploration of different world views–different ways of seeing humans’ relationship with nature. END_OF_DOCUMENT_TOKEN_TO_BE_REPLACED

Reported by Chloe Alimurong, Class of 2025

END_OF_DOCUMENT_TOKEN_TO_BE_REPLACED

Reported by Mateja Bokan, Class of 2026.

In this lecture titled Science and Empathy: Looking at China from the West in the early 20th century, Professor Prado-Fonts, an Associate Professor in the department of Arts and Humanities at the Universitat Oberta de Catalunya, explains the portrayal of China, its people, and its culture in the Western nations around the time of Picasso’s painting (1897) and developed in the first decades of the 20th century and into the interwar period.  END_OF_DOCUMENT_TOKEN_TO_BE_REPLACED 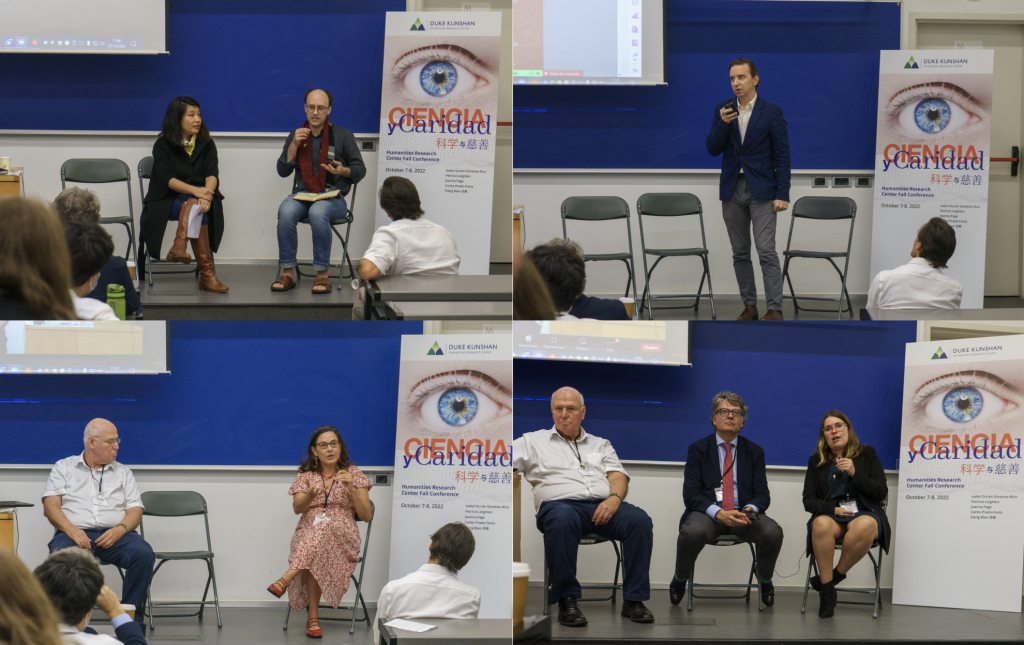 After a series of student research presentations, James Miller, Co-Director of the HRC led us into a presentation of the several research labs within the HRC. Prof. Miller began by praising the students for their research and said that the Humanities labs provide a beginning for undergraduate students interested in conducting research.

The Humanities labs are time limited and receive funding for only 2-3 years, after which they are closed, and new projects are started. END_OF_DOCUMENT_TOKEN_TO_BE_REPLACED

During the Ciencia y Caridad, Humanities Fall Conference held in Barcelona by DKU’s Humanities Research Center, multiple student presentations were held. Projects ranged from Art and Humanities to Data and Policy, tying in themes of the intersections of research and charity, stressing the humanity in humanities. Below are the summaries of the presentations that took place on Saturday, the eighth, along with photos from Shuyuan Zhou’s presentation. 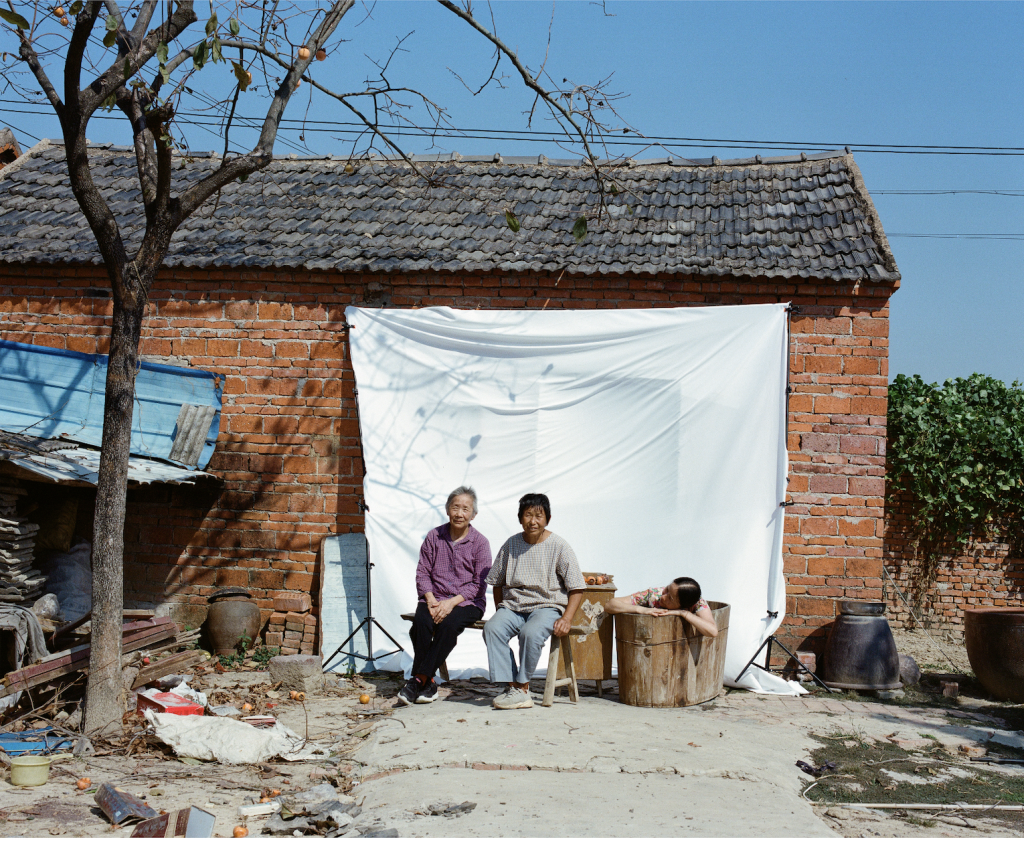 Shuyuan Zhou presented, My Great Grandmother, My Grand Aunt, My Grandmother, My Mother, and I: A Family Album, a series which collected, questioned, and answered on the intergenerational female experience. Through images of her and her family along with some of the storytelling ability of objects in the collection, Zhou shared to us the beauty and suffering in femininity across time.

The Feminine Fabulation: Chinese Women’s Taking In and Spitting Out Bitterness presented by Meixuan Wang END_OF_DOCUMENT_TOKEN_TO_BE_REPLACED

Reported by Soumya Lahoti, Class of 2025

Isabel Duran Gimenez-Rico, professor at the Universidad Complutense de Madrid, welcomed everyone warmly and had an introduction round. She started by explained why we should read sad stories. They are a way of combating sexism and many other societal vices. Humanities have grown as a way of making people aware of how others suffer; literature opens our eyes to women’s, homosexuals, and old-age people’s struggles. They work as they are all intensely sad narratives. They make us, the reader feel a sense of discomfort. END_OF_DOCUMENT_TOKEN_TO_BE_REPLACED